Revolutions without Borders: The Call to Liberty in the Atlantic World: Janet Polsky 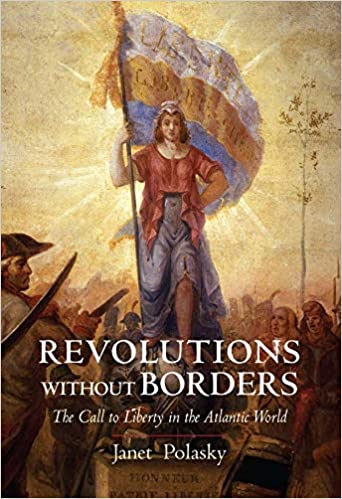 Nation-based histories cannot do justice to the rowdy, radical interchange of ideas around the Atlantic world during the tumultuous years from 1776 to 1804. National borders were powerless to restrict the flow of enticing new visions of human rights and universal freedom. This expansive history explores how the revolutionary ideas that spurred the American and French revolutions reverberated far and wide, connecting European, North American, African, and Caribbean peoples more closely than ever before.

Historian Janet Polasky focuses on the eighteenth-century travelers who spread new notions of liberty and equality. It was an age of itinerant revolutionaries, she shows, who ignored borders and found allies with whom to imagine a borderless world. As paths crossed, ideas entangled. The author investigates these ideas and how they were disseminated long before the days of instant communications and social media or even an international postal system. Polasky analyzes the paper records—books, broadsides, journals, newspapers, novels, letters, and more—to follow the far-reaching trails of revolutionary zeal. What emerges clearly from rich historic records is that the dream of liberty among America’s founders was part of a much larger picture. It was a dream embraced throughout the far-flung regions of the Atlantic world.