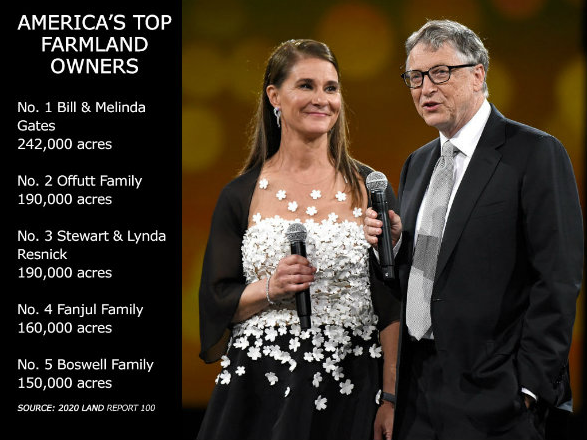 The co-founder of Microsoft and his wife rank as America’s largest private farmland owners.

Call it a hunch, but the story did not jibe. I scanned the headline for the umpteenth time and then read and reread the pertinent details. Something was missing. Either that or I had a screw loose. According to the Tri-City Herald, a 14,500-acre swath of choice Eastern Washington farmland in the Horse Heaven Hills of Benton County had just traded hands for almost $171 million. That’s a ginormous deal, one that pencils out to almost $12,000 per acre for a whole lot of acres. Pretty pricey dirt, right? That’s exactly what I thought. Especially when it comes to row crops like sweet corn and wheat, which were grown in rotation with potatoes on 100 Circles, which is the name of the property that changed hands. Then again, farmers and investors in the Mid-Columbia River market expect to pay $10,000 to $15,000 for good ground. Anyone who has ever studied the Columbia River Basin knows that the tillable acreage there is coveted ground, a geologic wonder. The soil profile and underlying silty loess are in a league of their own.

I had gained this smidgen of geologic proficiency while researching our 2018 Farmland Deal of the Year, Weidert Farm, in neighboring Walla Walla County. One of the most telling moments in the field that summer came when a soil scientist by the name of Alan Busacca grabbed a shovel and stepped into a 10-foot trench that had been ripped open on the farm by a Caterpillar 336. Dusky layers of silt and sand towered over the 6-foot-tall retired Washington State professor. There wasn’t a rock, let alone a pebble, or even a root to be seen in the soil. Busacca was in his element: It was some of the richest farmland in the Lower 48. And from an agricultural perspective, the region surrounding Walla Walla and the Horse Heaven Hills has evolved into a commercial hub, complete with controlled atmosphere (CA) storage, state-of-the-art transportation infrastructure, and ready access to low-cost hydropower.

These are a few of the reasons why savvy investors have been plowing millions of dollars into farmland on both the Oregon and the Washington sides of the Columbia River Gorge. At current valuations, it’s one of the nation’s best farmland opportunities. In 2018, when 100 Circles sold, it was even better.

More often than not, farmland sales involve hundreds of acres. Thousand-acre transactions — such as the sale of 6,000- acre Weidert Farm to Farmland L.P. two years ago and the 6,175-acre Broetje Orchards acquisition by the Ontario Teachers’ Pension Plan last year — are blue-moon events.

Tens of thousands of acres? Only sovereign wealth funds and institutional investors can stroke a check for tracts in that league, which is exactly what occurred on the sell side of the 100 Circles transaction: The seller was John Hancock Life Insurance, a multibillion-dollar asset manager with key holdings in all the major US markets as well as Canada and Australia.

The story went dark on the buy side, however. The Tri-City Herald reported that the purchaser was a “Louisiana investor,” a limited liability company associated with Angelina Agriculture of Monterey, Louisiana. Sorry, but that didn’t pass the sniff test.

The Land Report tracks numerous Louisiana landowners; Angelina Agriculture is not one of them. Let’s call that strike one. The burgeoning metropolis of Monterey, population 462, rang a bell, but despite my best efforts, I couldn’t connect the dots to anyone whom we had profiled in The Land Report or, for that matter, anyone who was on our watch list. So I took a look at Dun & Bradstreet. At its listed headquarters — 8318 Highway 565 — Angelina Agriculture boasted two employees and reported annual revenues just north of $300,000. Given the size and cost of 100 Circles, both of those figures made no sense at all. Strike two. How about Google Maps? An aerial image of the Highway 565 address revealed a small metal-sided building off by itself in the woods. Strike three, right?

One of my favorite Clint Eastwood movies is the 1999 mystery/thriller True Crime. In it, the four-time Academy Award winner plays an over-the-hill journalist who has “a nose” for a story. I am quite confident that Eastwood’s character, Steve Everett, would have picked up the stench from this setup a mile off: a $171 million acquisition by an LLC with two employees in a metal-sided building down a dirt road off the Bayou Teche? I forwarded the lead to our Land Report 100 Research Team. Minutes later, a terse response arrived:

“Ever hear of Bill Gates?”

Actually, when it comes to the extensive farmland portfolio of Bill and Melinda Gates, the question should be, “Ever hear of Michael Larson?” For the last 25 years, the Claremont McKenna College alum has managed the Gateses’ personal portfolio as well as the considerable holdings of the Bill & Melinda Gates Foundation. (Although our researchers identified dozens of different entities that own the Gateses’ assets, Larson himself operates primarily through an entity called Cascade Investment LLC.)

In 1994, the Gateses hired the former Putnam Investments bond-fund manager to diversify the couple’s portfolio away from the Microsoft co-founder’s 45 percent stake in the technology giant while maintaining comparable or better returns. According to a 2014 profile of Larson in the Wall Street Journal, these investments include a substantial stake in AutoNation, hospitality interests such as the Charles Hotel in Cambridge and the Four Seasons in San Francisco, and “at least 100,000 acres of farmland in California, Illinois, Iowa, Louisiana, and other states … .” According to the Land Report 100 Research Team, that figure is currently more than twice that amount, which means Bill Gates, co-founder of Microsoft, has an alter ego: Farmer Bill, the guy who owns more farmland than anyone else in America.

After AgCoA, the Canada Pension Plan Investment Board acquired a second tranche of farmland assets when it paid $2.5 billion for a 40 percent stake in Glencore Agricultural Products in 2016. The very next year, however, the Canada Pension Plan Investment Board began shedding these very same farmland assets as quickly as it had acquired them. And it did this so quietly one might even say it was done in secret.

There was no public announcement, and no notice in the business press. Instead, the Canada Pension Plan Investment Board revealed in the fine print of a quarterly statement that it had sold $520 million in US farmland assets held by Agriculture Company of America. Credit Chris Janiec at Agri Investor for this eagle-eyed investigating. The Americas Editor at Agri Investor, Janiec reported that the assets had been offered as a single block and “that Microsoft founder Bill Gates is thought to be the buyer of CPPIB’s farmland.” Janiec stayed on the story, and the following year, he confirmed the parameters of sale when he reported the addition of 61 properties valued at approximately $500 million to the National Council of Real Estate Investment Fiduciaries’ (NCREIF) US Farmland Index. This half-billion-dollar figure corroborated the AgCoA acquisition, and the paper trail led directly to Cascade Investment LLC.

All told, the 2017 acquisition of AgCoA and the 2018 acquisition of the 100 Circles tract in the Horse Heaven Hills of Eastern Washington total an investment in farmland assets of more than $690 million. Janiec’s sources said some of the AgCoA assets were quickly sold off, but according to the Land Report 100 Research Team, an estimated 242,000 acres of farmland remained.

Yet farmland assets aren’t the sole component of the Gateses’ landholdings. In 2017, Cascade Investment bought a “significant stake” in 24,800 acres of transitional land on the western edge of Phoenix, the most populous city in Arizona and the 10th largest metropolitan area in the country. The acreage sits off Interstate 10, and it is poised to be accessible by Interstate 11, a proposed highway that would traverse 5 miles of the 40-square-mile holding. At buildout, the Belmont development will create a brand-new metropolis, one similar in size to the Phoenix suburb of Tempe, home to Arizona State University and almost 200,000 residents. According to The Arizona Republic, Belmont is projected to include up to 80,000 homes; 3,800 acres of industrial, office, and retail space; 3,400 acres of open space; and 470 acres for public schools.

Cascade Investment doubled down on Phoenix transitional land two years later when it made a second major investment by acquiring more than 2,800 acres known as Spurlock Ranch in Buckeye for $25 million.

A spokesman for Cascade Investment declined to comment on any of the details associated with these transactions or the Gateses’ holdings, other than to say that Cascade is very supportive of sustainable farming.

Much like the Bill & Melinda Gates Foundation uses science and technology to achieve a number of worthy goals — including transitioning millions of people out of poverty, improving people’s health and well-being, and ensuring that all people have access to opportunities necessary to succeed in school and in life — Cascade’s farmland holdings also aim to further laudable objectives.

In January 2020, The Land Report announced the launch of a sustainability standard that was developed by US farmland owners and operators. Called Leading Harvest, the organization’s goal is to create a sustainability standard thatcan be implemented across the greatest swath of agricultural acreage. Currently, more than 2 million acres in 22 states and an additional 2 million acres in seven countries are represented. Among the participants in the 13-member Sustainable Agriculture Working Group are Ceres Partners, Hancock Natural Resources Group, The Rohaytn Group, and UBS Farmland Investors.

Not surprisingly, one of Leading Harvest’s other inaugural members is a Cascade entity called Cottonwood Ag Management. Committing the resources to launch this all-important standard validates the assertion that Cascade supports sustainable strategies that advance resiliency and efficiency, retain talent, and reduce regulatory burdens.

Although the Bill & Melinda Gates Foundation has no ties whatsoever to Cascade or its investments, it also has a farmland initiative: Gates Ag One, which has established its headquarters in the Greater St. Louis area. According to the St. Louis Business Journal, Gates Ag One will focus on research that helps “smallholder farmers adapt to climate change and make food production in low- and middle-income countries more productive, resilient, and sustainable.”