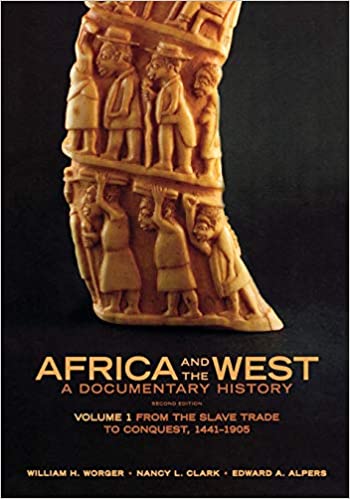 Africa and the West presents a fascinating array of primary sources to engage readers in the history of Africa’s long and troubled relationship with the West. Many of the sources have not previously appeared in print, or in books readily available to students. Volume 1 covers two major topics: the Atlantic slave trade and the European conquest. It details the beginnings of the slave trade, slavery as a business, the experiences of slaves, and the effect of abolitionism on the trade, using such documents as a letter from a sixteenth-century African king to the king of Portugal calling for a more regulated slave trade, and the nineteenth-century testimony of a South African slave accused of treason. The volume also covers the early nineteenth-century considerations of the costs and benefits of colonization, the development of conquest as the century progressed, with special attention to technology, legislation, empire, religion, racism, and violence, through such unusual documents as Cecil Rhodes’s will and a chart of the costs of African animals exported to Western zoos.

“This is a very successful history of the Indian Ocean. It is also, often silently, an important
contribution to world history…What is remarkable is that Alpers touches all the main bases and themes even in this short compass…Alpers has long been known as an East Africa, and especially Mozambique, specialist. This makes even more commendable the way he writes extensively and knowledgably on the other side of the ocean, the Bay of Bengal, the Malay world, and the South China Sea.”–International Journal of Maritime History
“The selection and organization of the documents is so effective that the book provides a wonderful introduction into Africa’s intersection with Europe through the words of the people who lived through it. From the era of the slave trade to the establishment of the new South Africa, Africa and the West portrays Africa as a real place full of complex and interesting people and institutions, and it emphasizes that the ‘Western’ intersection with Africa was more than just an impact and response. People experienced, observed, critiqued, thought, planned, plotted, and dreamed. Together, the documents of this collection provide powerful evidence of the sheer level of thought, debate, struggle, and planning that went into every stage of the Africa/West experience.”–African Studies Quarterly

“This superb collection illuminates the West’s impact on Africa from 1400 to 1994. The editors note that they have endeavored to publish documents that will interest audiences from middle school students to college graduates. They have succeeded. These highly readable selections will serve Africa well as they help students understand that African history is complex, engaging, and important.”–International Journal of African Historical Studies
“An excellent example of a documentary textbook for use in undergraduate classrooms.”–World History Bulletin

Willim H. Worger is Professor of History at UCLA.

Edward A. Alpers is Professor of History at UCLA.

Africa and the West: A Documentary History: Volume 2: From Colonialism to Independence, 1875 to the Present 2nd Edition