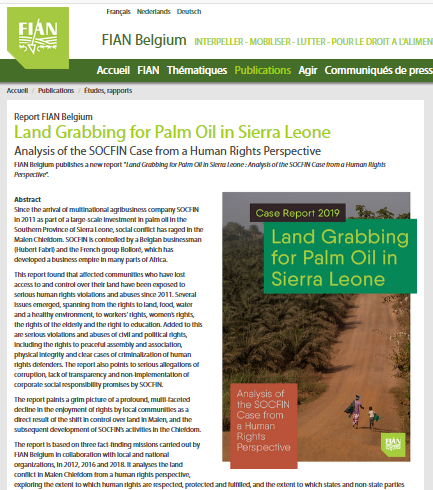 Abstract
Since the arrival of multinational agribusiness company SOCFIN in 2011 as part of a large-scale investment in palm oil in the Southern Province of Sierra Leone, social conflict has raged in the Malen Chiefdom. SOCFIN is controlled by a Belgian businessman (Hubert Fabri) and the French group Bolloré, which has developed a business empire in many parts of Africa.

This report found that affected communities who have lost access to and control over their land have been exposed to serious human rights violations and abuses since 2011. Several issues emerged, spanning from the rights to land, food, water and a healthy environment, to workers’ rights, women’s rights, the rights of the elderly and the right to education. Added to this are serious violations and abuses of civil and political rights, including the rights to peaceful assembly and association, physical integrity and clear cases of criminalization of human rights defenders. The report also points to serious allegations of corruption, lack of transparency and non-implementation of corporate social responsibility promises by SOCFIN.

The report paints a grim picture of a profound, multi-faceted decline in the enjoyment of rights by local communities as a direct result of the shift in control over land in Malen, and the subsequent development of SOCFIN’s activities in the Chiefdom.