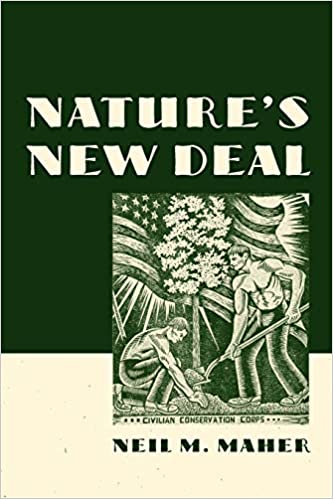 The Great Depression coincided with a wave of natural disasters, including the Dust Bowl and devastating floods of the Ohio and Mississippi rivers. Recovering from these calamities–and preventing their reoccurrence–was a major goal of the New Deal.

In Nature’s New Deal, Neil M. Maher examines the history of one of Franklin D. Roosevelt’s boldest and most successful experiments, the Civilian Conservation Corps, describing it as a turning point both in national politics and in the emergence of modern environmentalism. Indeed, Roosevelt addressed both the economic and environmental crises by putting Americans to work at conserving natural resources, through the Soil Conservation Service, the Tennessee Valley Authority, and the Civilian Conservation Corps (or CCC). The CCC created public landscapes–natural terrain altered by federal work projects–that helped environmentalism blossom after World War II, Maher notes. Millions of Americans devoted themselves to a new vision of conservation, one that went beyond the old model of simply maximizing the efficient use of natural resources, to include the promotion of human health through outdoor recreation, wilderness preservation, and ecological balance. And yet, as Maher explores the rise and development of the CCC, he also shows how the critique of its campgrounds, picnic areas, hiking trails, and motor roads frames the debate over environmentalism to this day.

From the colorful life at CCC camps, to political discussions in the White House and the philosophical debates dating back to John Muir and Frederick Law Olmsted, Nature’s New Deal captures a key moment in the emergence of modern environmentalism.

“Maher has satisfied long unsatiated appetites with a full plate of new ideas and insight about Franklin Roosevelt’s beloved agency [and] should be congratulated for bringing science into the historical equation.”–H-Net

“[T]his book shows us that while we might know some of the nuts and bolts of the CCC and understand its popularity, in fact we have little understanding of the critical role it played in American environmentalism in the mid-twentieth century….Maher does a nice job of explaining the CCC….Nature’s New Deal belongs on every environmental historian’s bookshelf but it also speaks beyond our field to not only American historians in general but also to environmental activists and general readers.”–Environmental History

“Neil Maher’s Nature’s New Deal invites us to accord the CCC a centrality in the history of environmentalism….Besides enlarging the debate to include human conservation, the ranks of the interested were swelled by what the CCC accomplished, not least by former enrollees who flocked to forestry jobs and the forestry departments of state universities, but also by the legion of citizens who had some to value recreating in altered landscapes, and even by the opponents of CCC ‘violations’ of pristine nature. All became and their successors remain advocates for conservation, however defined.”–Gregg R. Narber, The Annals of Iowa
“Blending careful research with an ability to synthesize seemingly disparate topics, from electoral politics to gender roles and landscape architecture, Maher offers a rich and complex history of how Americans became green….This is an ambitious and imaginative book that opens new terrain for historians.”–Matthew Klingle, American Historical Review

“A meticulously researched history of Franklin D. Roosevelt’s most popular New Deal program, the Civilian Conservation Corps (CCC) and its political implications and impact on conservation-environmental movements then and now….Highly recommended.”–P.D. Travis, CHOICE

“Neil Maher has done us a great service by recalling the forgotten history of the New Deal’s conservation programs. His research is impressive, and he writes with clarity and grace. His study offers us valuable insights for understanding the environment controversies of our time.”–Howard Zinn, author of A People’s History of the United States
“Neil Maher’s brilliant book shows that the Civilian Conservation Corps did much more than plant trees, clear trails, and build parks–in critical ways, the CCC broadened the conservation cause. Nature’s New Deal is required reading for anyone interested in the roots of the modern environmental movement.”–Adam Rome, author of The Bulldozer in the Countryside: Suburban Sprawl and the Rise of American Environmentalism

“Nature’s New Deal is not only a compelling case study of the centrality of conservation to New Deal state-building; it is also a stunning explication of the Civilian Conservation Corps’ profound and lasting legacy for modern environmental politics.”–Paul S. Sutter, University of Georgia

“Nature’s New Deal is not only an engaging and well-written history of the most popular program of the New Deal, the Civilian Conservation Corps, but a compelling assessment of its long-term impact on the land and on environmental politics. All students of the Depression era or environmental politics will want to read it. Those who seek a stronger environmental policy simply must.”–Louis S. Warren, author of Buffalo Bill’s America: William Cody and the Wild West Show

“An important new book that will prove as useful to scholars and teachers of the New Deal as to those of environmental history.”–Elizabeth Pillsbury, Register of the Kentucky Historical Society

“From corps camp records and government publications to popular media such as magazines and newspapers, Neil Maher presents a well-documented story of this key time in environmental history. Though the book will be well received by scholars as a primer on New Deal Era environmental thought, the author presents the material in a manner whereby even the lay reader will find great enjoyment in the adventure from Hetch Hetchy to Echo Park.”–Chronicles of Oklahoma