*** Note Bene ***
Although this YouTube recording has been “taken down” by YouTube authorities, you can see related material at: 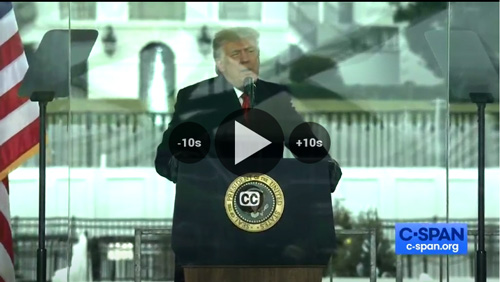 President Trump spoke at a rally in Washington, D.C., held to protest the results of the Electoral College, which Congress was set to count later that day. “We will never give up. We will never concede,” he declared. President Trump repeated his unsubstantiated claims of fraud in both the November election and the Georgia U.S. Senate runoff election held the previous night. He railed against Republicans he deemed insufficiently supportive of his efforts to overturn the results and promised to “primary the hell out of the ones that don’t fight.” The president also continued to publicly pressure his vice president, Mike Pence, to reject electoral votes in states that he lost. As the speech was concluding, Vice President Pence issued a statement saying he lacked the constitutional authority to dismiss the votes when Congress met later that day.

Note: Because of audio difficulties with the president’s microphone, there was no audio during the first 38 seconds of his remarks.