WASHINGTON — One of his most important early backers now says supporting him “was the worst mistake I ever made in my life,” and a top donor called for him to be censured by the Senate.

That’s just some of the condemnation that’s come Sen. Josh Hawley‘s way since the Missouri Republican became the first senator to announce he would object to the counting of Electoral College votes and then moved forward with his plan even after a mob of President Donald Trump’s supporters had stormed the Capitol on Wednesday.

The largest newspapers in his home state called on him to resign. His publisher canceled its contract with him for an upcoming book. He’s been pilloried by both Democrats and Republicans for leading the futile objection effort.

And a viral photo of Hawley entering the Capitol before the riot, showing the senator in a slim-fitting suit, hair perfectly coiffed and raising his fist toward the gathered crowd, has already become a lasting image of a day that won’t soon be forgotten.

“It was like a Dukakis-on-the-tank moment,” one Republican strategist said in a reference to a famous attack ad on the 1988 Democratic presidential nominee, “in that he just looked phony and out of place and like a doofus.” 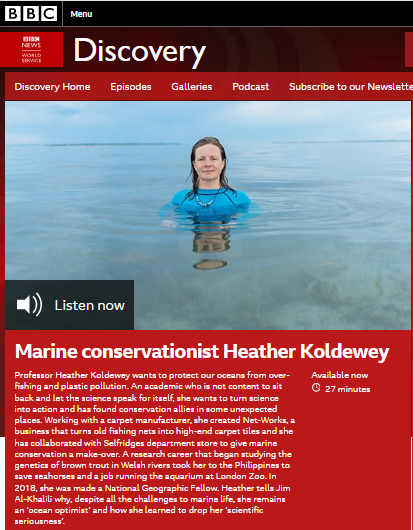 Professor Heather Koldewey wants to protect our oceans from over-fishing and plastic pollution. An academic who is not content to sit back and let the science speak for itself, she wants to turn science into action and has found conservation allies in some unexpected places. Working with a carpet manufacturer, she created Net-Works, a business that turns old fishing nets into high-end carpet tiles and she has collaborated with Selfridges department store to give marine conservation a make-over. A research career that began studying the genetics of brown trout in Welsh rivers took her to the Philippines to save seahorses and a job running the aquarium at London Zoo. In 2018, she was made a National Geographic Fellow. Heather tells Jim Al-Khalili why, despite all the challenges to marine life, she remains an ‘ocean optimist’ and how she learned to drop her ‘scientific seriousness’.

Jan 10, 2021
For years, Twitter was Donald Trump’s go-to platform to promote his policies, attack his critics and to spread misinformation.
But on Friday, Twitter said enough, and permanently suspended his account, due to a risk of further incitement of violence.
That’s the President of the United States, banned, for encouraging violence in his own country.
Social media platforms were under growing pressure to take action against Trump, after hundreds of his supporters stormed Capitol Hill in Washington on Wednesday.
But is that a crackdown on freedom of speech?
And how has social media helped those in power push their agendas?

The Spy in Your Phone | Al Jazeera World

Pegasus is manufactured by an Israeli technology company called the NSO Group and is among the most advanced spyware in the world. It can access and infiltrate a smartphone without the owner clicking a link, opening an email or even answering their phone – meaning it can go undetected.

This investigation exposes how Pegasus works, how governments like Saudi Arabia and the UAE have bought the hugely expensive spyware and how it has been used beyond the stated intentions of the NSO Group of “developing technology to prevent and investigate terror and crime” – including to target journalists.

Can US democracy recover? | The Stream

Chaos in America A violent mob this week broke through police lines in Washington DC and stormed the Capitol Building – the seat of American democracy – in an attempt to stop Joe Biden being certified as president. One woman was shot dead by police and police say three others died from unspecified medical emergencies. Even as the drama of the images stunned the world, many observers said the insurrection should not have come as a surprise. Outgoing President Donald Trump had continued to claim fraud from election night to the morning of the violence, when he inflamed a crowd of supporters and called on them to “walk down to the Capitol”. Many took him at his word. Now even some of his most loyal supporters are turning against Trump and calls are growing to remove him from office before January 20th, on which the transition to Biden will happen. In this segment, we ask whether the US can recover from a direct assault on its democratic principles.

Nature Bats Last
Our first livestream of the year! And boy has this year started with a bang!

How to get your ideas to spread | Seth Godin

http://www.ted.com In a world of too many options and too little time, our obvious choice is to just ignore the ordinary stuff. Marketing guru Seth Godin spells out why, when it comes to getting our attention, bad or bizarre ideas are more successful than boring ones.

How symbols and brands shape our humanity | Debbie Millman

“Branding is the profound manifestation of the human spirit,” says designer and podcaster Debbie Millman. In a historical odyssey that she illustrated herself, Millman traces the evolution of branding, from cave paintings to flags to beer labels and beyond. She explores the power of symbols to unite people, beginning with prehistoric communities who used them to represent beliefs and identify affiliations to modern companies that adopt logos and trademarks to market their products — and explains how branding reflects the state of humanity.

Last Days of the Trump Presidency 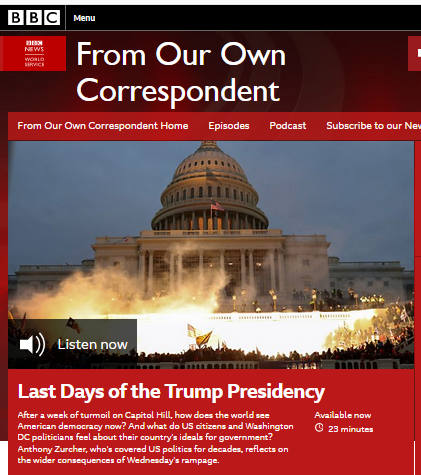 After a week of turmoil on Capitol Hill, how does the world see American democracy now? And what do US citizens and Washington DC politicians feel about their country’s ideals for government? Anthony Zurcher, who’s covered US politics for decades, reflects on the wider consequences of Wednesday’s rampage.

Psychoanalyst: Trump Is “Delusional Psychopath” Who Needs To Be Removed Immediately | The Last Word

Dr. Lance Dodes joins Lawrence O’Donnell to discuss Trump’s mental state as he’s banned from Twitter and why he will get worse once he leaves office and faces legal jeopardy: “The more desperate he becomes, the more delusional he is, the more he needs to prove to himself ultimately that he is still a god, so the less power he has, the more stress he’s under, the more dangerous he is.” Aired on 1/9/2021.