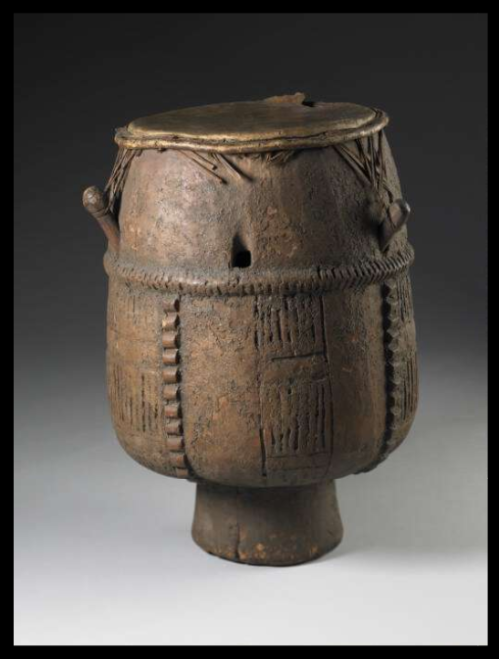 Drum (Apentemma) goblet shaped open drum with a hollow pedestal, the main body made of wood (Cordia africana), with six wood pegs (Baphia nitida), a skin head (deer or antelope?) and cord made of two main vegetable fibres (Clappertonia ficfolia and Raphia) – among others – which is around the head of the drum and attached to the pegs; there is a coating on the…

· Inscription position: on the drum’s surface

The apentema (aka Apentemma) was made in the early 18th century and would have been part of one of any number of drum groups or ensembles from West Africa – fontomfrom , Adowa, Kete or Abofoe. the drum is played with an open hand, not sticks.

The Sloane register records that this drum was acquired from a Mr. Clerk of Virginia, then a British colony, by Hans Sloane in the early eighteenth century. The records suggest that Clerk may have collected it from an “Indian” group, although its association with the slave trade is clear based on the African materials and origin.

Africa, Oceania and the Americas