14 people have been arrested in connection with a series of shootings in the Austrian capital Vienna that left four people dead.

22 others were injured when a gunman, described as an Islamist terrorist by the authorities, fired into crowds of people at six different locations.

In the UK the terror threat level has been raised from ‘substantial’ to ‘severe’ which means an attack is thought to be highly likely.

Joy Reid On Trump Saying He May Fire Dr. Fauci: ‘I Can’t Think Of A Worse Closing Argu ment’

On Trump saying he may fire Dr. Anthony Fauci after the election, Joy says “I can’t think of a worse closing argument than ‘Fire Fauci.’” Aired on 11/02/2020.

WATCH: What we know about how COVID-19 spreads and how long the pandemic may last

When asked what we currently know about the COVID-19 pandemic, Dr. Ashish Jha told PBS Newshour correspondent William Brangham that we know the virus spreads when large numbers of people gather indoors for any extended period of time while not wearing masks. He also assured that the pandemic “is not forever” and anticipates new testing technology and vaccines will start making life resemble some version of normal by Spring 2021.

How do we get out of the financial mess we’re in? Two of the great economic thinkers of the 20th century had sharply contrasting views: John Maynard Keynes believed that governments could create sustainable employment and growth. His contemporary and rival Friedrich Hayek believed that investments have to be based on real savings rather than fiscal stimulus or artificially low interest rates. BBC Radio 4 will be recording a debate between modern day followers of Keynes and Hayek.

George Selgin is Professor of Economics at The Terry College of Business, University of Georgia. Selgin is one of the founders of the Modern Free Banking School, which draws its inspiration from the writings of Hayek on the denationalization of money and choice in currency. He has written extensively on free banking, the private supply of money and deflation. George Selgin is the author of The Theory of Free Banking: Money Supply under Competitive Note Issue (1988), Less Than Zero: The Case for a Falling Price Level in a Growing Economy (1997), and Good Money: Birmingham Button Makers, the Royal Mint, and the Beginnings of Modern Coinage (2008).

Robert Skidelsky is Emeritus Professor of Political Economy at the University of Warwick. His three-volume biography of the economist John Maynard Keynes (1983, 1992, 2000) received numerous prizes, including the Lionel Gelber Prize for International Relations and the Council on Foreign Relations Prize for International Relations. He is the author of The World After Communism (1995) (American edition called The Road from Serfdom). He was made a life peer in 1991, and was elected Fellow of the British Academy in 1994. His latest book is Keynes: The Return of the Master.

Duncan Weldon is a former Bank of England economist and currently works as an economics adviser to an international trade union federation. He has a long standing interest in and admiration for Keynes but also a respect for Hayek. He blogs at Duncan’s Economic Blog.

Jamie Whyte was born in New Zealand and educated at the University of Auckland and then the University of Cambridge in England, where he gained a Ph.D. in philosophy. Jamie remained at Cambridge for a further three years, as a fellow of Corpus Christi College and a lecturer in the Philosophy Faculty. During this time he published a number of academic articles on the nature of truth, belief and desire, and won the Analysis Essay Competition for the best article by a philosopher under the age of 30. Jamie then joined Oliver Wyman & Company, a London-based strategy consulting firm specialising in the financial services industry, for which he still works, as the Head of Research and Publications. Jamie has published two books: Crimes Against Logic (McGraw Hill, Chicago, 2004) and A Load of Blair (Corvo, London, 2005). Jamie is a regular contributor of opinion articles to The Times (of London), the Financial Times and Standpoint magazine. In 2006 he won the Bastiat Prize for journalism.He is on the advisory board of The Cobden Centre.

The debate will be chaired by Paul Mason, economics editor of BBC 2’s Newsnight and author of Meltdown: The End of the Age of Greed.

This is called Jevons Paradox, discovered by William Stanley Jevons in 1865. He was concerned that improved steam engines would make England run out of coal faster!

The paradox of efficiency | Edward Tenner

Is our obsession with efficiency actually making us less efficient? In this revelatory talk, writer and historian Edward Tenner discusses the promises and dangers of our drive to get things done as quickly as possible — and suggests seven ways we can use “inspired inefficiency” to be more productive.

The COVID-19 pandemic has revealed the fragility of our food and health systems. Scientists agree that preserving intact ecosystems and tackling climate change reduces the prevalence of infectious diseases.1, 2 COVID-19 has reinforced understanding of the interdependence of ecological, animal, and human health by revealing what happens when we break down the natural barriers between animal and human populations. The destruction of natural habitats, wildlife trade, and intensive livestock farming systems all increase the risk of diseases spreading to human populations. New zoonotic and infectious diseases such as Ebola, SARS, bird flu, and now the coronavirus COVID-19

are a symptom of this breakdown. COVID-19 has revealed the vulnerability of our food systems to shocks — panic buying, labour shortages, the health of food systems workers, the closure of informal markets, and growing food insecurity have impacted the most vulnerable populations.

Sustainable food systems play a critical role in creating and sustaining our health and well-being and that of the planet. It is time to put an integrated approach to human, ecological, and animal health and well-being at the heart of all policymaking, legislation, governance, investments, research, and practices.3

As governments around the world implement a set of economic stimulus packages and policies that support recovery, we urge them to consider a suite of health-promoting measures that are central to sustainable, resilient, and equitable food systems. Our own work with actors from around the world highlights the urgency for governments, alongside others, to shift mindsets and the prevailing narrative that focuses on producing more food with less impact — what we call the productivist, “feed the world” narrative — to one that promotes and prioritizes human, ecological, and animal health and well-being.4

The Global Alliance for the Future of Food and Tasting the Future undertook a comprehensive literature review and stakeholder interviews, and used insights from our set of case studies — Systemic Solutions for Healthy Food Systems: Approaches to Policy & Practice — to inform this guide for government action.5 Out of this process, a set of recommendations emerged that national governments can apply across geographies, cultures, and contexts in order to build resilience and improve food security outcomes. No one intervention will be sufficient on its own, and each must be adapted to the local context. 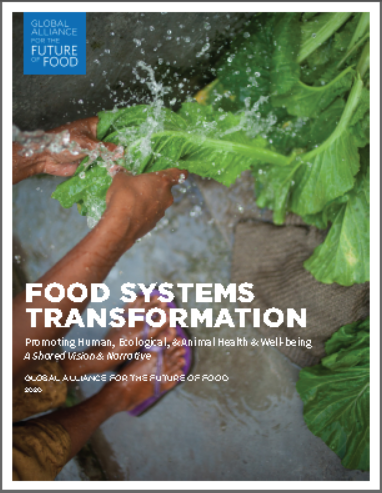 We know that a healthy planet provides the foundation for diverse and resilient ecosystems, which in turn are the bedrock for human health and well-being.1 Over the last several decades, however, profound changes in the way food is grown, processed, distributed, consumed, and wasted have resulted in the creation of food systems that increasingly push climate change, biodiversity loss, shifts in nutrient cycles (nitrogen and phosphorus), and land use beyond planetary boundaries.

The ongoing planetary emergency and COVID-19 pandemic have exposed the fragility of our global food systems, in particular their inherent inequalities, injustices, and interlinked nature. We are reminded of just how fundamental ecological and animal health are to human health.3 In addition, malnutrition (hunger, obesity, overweight, micronutrient deficiencies) and the associated rise of non-communicable diseases (NCDs) (e.g., cardiovascular disease, diabetes, cancer), antibiotic resistance, environmental contamination,

Ivory Coast’s opposition leaders said Monday they were creating a “transitional government” after boycotting a weekend election in protest over President Alassane Ouattara’s bid for a contested third term.