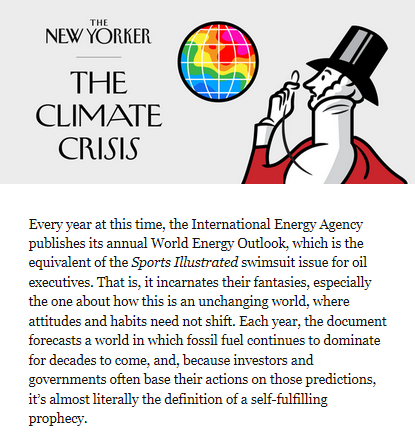 Every year at this time, the International Energy Agency publishes its annual World Energy Outlook, which is the equivalent of the Sports Illustrated swimsuit issue for oil executives. That is, it incarnates their fantasies, especially the one about how this is an unchanging world, where attitudes and habits need not shift. Each year, the document forecasts a world in which fossil fuel continues to dominate for decades to come, and, because investors and governments often base their actions on those predictions, it’s almost literally the definition of a self-fulfilling prophecy.

The problem, of course, is that the world it confidently imagines is an impossible one. If, as the I.E.A.’s current “sustainable development scenario” predicts, we don’t shut off the flow of fossil fuel until 2070, then the World Habitability Outlook, if there were such a thing, would be grim. (September, 2020, was the hottest September ever measured. That helped set the stage for, among many other novel forms of damage, the first Greek-letter hurricane ever to hit the United States and devastating wildfires in Paraguay, Argentina, and Bolivia.) The rational goal of the I.E.A. (a club of oil-consuming countries, first proposed by Henry Kissinger in the wake of the OPEC embargo of the nineteen-seventies) should be to model what science says we require to survive and then chart a path toward getting us there. And, this year, after intense pressure from activists, that began to happen. Along with the main report, the I.E.A. released a miniature scenario that tries to foresee a world in which we reach net zero by 2050. That’s still too slow to meet the climate targets set in Paris, in 2015, but at least it’s in the ballpark. Next year, the activists say, that nearer-term forecast needs to be the central event, not the kiddie table—taken seriously, such a scenario could be a crucial document as the world assembles in Glasgow a year from November for a critical round of talks about carbon cuts.

An I.E.A. report that took science as its starting point would not be revolutionary. In fact, there are signs that important parts of the world’s financial system are already beginning to get the message, thanks to unrelenting pressure. JPMorgan Chase, the world’s biggest fossil-fuel investor, this month committed to a “Paris alignment” of its lending practices. (Full disclosure: I was arrested in a Chase branch near the Capitol, in January, to help accelerate this campaign.) As activists point out, this vague target is barely a start. But the pressure won’t be going away: members of the Rockefeller family, whose forebears helped build Chase into the giant it is today, announced that they are rallying wealthy peers to prod the bank into more aggressive action, demanding that it “embrace innovation and move beyond the profits of fossil fuels to develop banking models that will excel in a zero-carbon world.” Some of the nations that constitute the I.E.A. are clearly ready for more: in the United Kingdom, Boris Johnson’s government noised around the idea that all of its home electricity could come from offshore wind by 2030. (A truly great idea, in part because, at the moment, too much of it is coming from burning wood pellets shipped over from the southeastern United States, which, as a new report makes clear, is a definitional example of environmental racism.)

The COVID-19 spreading in the U.S. is worsening with 7.9 million confirmed cases and more than 215,000 deaths. Even U.S. President Donald Trump contracted the virus, leaving his political opponents working hard to curb the outbreak. In an unprecedented move, the New England Journal of Medicine published an editorial signed by all its editors, condemning the lack of leadership in response to the pandemic. The journal said there was too little testing, too little protective equipment, and a lack of measures like mask wearing and social distancing. CGTN’s Tian Wei talked to Dr. Eric Rubin, the editor in chief of the New England Journal of Medicine, who explained why they published this editorial. 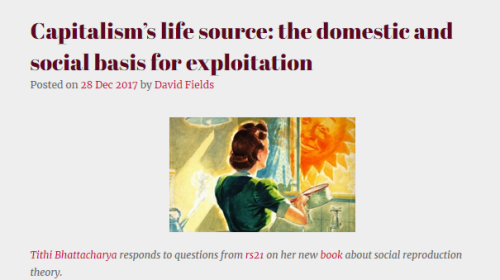 Tithi Bhattacharya responds to questions from rs21 on her new book about social reproduction theory.

For someone who hasn’t come across the term before, what is social reproduction theory?

Most stories about capitalist production begin when the worker reaches the doors of the workplace. SRT is the backstory to that narrative. If production of commodities by the worker starts at, say, 7:00 am and stops at 5:00 pm, then SRT is about what happens before 7 and after 5.

Back to the question of who produces the worker, one part of that answer is easy, almost common sense, and this is the part played by social reproduction in the private sphere, or at home. Obviously, it is because our worker had dinner, a bed to sleep in, and access to other similar ways to regenerate her capacity to work, that she is able to return to work. After her long shift at work did she then have to do a ‘second shift’ of cooking for herself and her family? Did she have to pick up her child and soothe her? Such questions open up a new set of issues. But let us for a moment set them aside and simply catalogue the ways in which her home, her place within the family, helps regenerate her working capacity.

The hug that helped change medicine

In 1995, a baby was saved by the hug of her sibling. CNN’s Lisa Sylvester reports on a twin bond that has lasted.

“The outline of a compromise is not visible. If anything the EU’s position might be hardening on fisheries” said one source close to the talks.

WW2 bomb explodes during attempt to defuse it – BBC News

The largest unexploded World War Two bomb ever found in Poland has detonated during an attempt to defuse it.

The RAF dropped the Tallboy or “earthquake” bomb in a raid in 1945 which sank the German cruiser Lützow.

The Polish Navy said there had been a 50:50 chance the bomb would explode and all the divers were unharmed.

The bomb was at the bottom of a Baltic Sea shipping canal, and about 750 residents near the port city of Swinoujscie were evacuated.

The main UK opposition leader has demanded a two to three week lockdown in England after it was revealed the Prime Minister has been ignoring the recommendations of scientific advisors.

Are the UK nations and their regions heading for puzzle piece Covid lockdown? | ITV News

Keeping up with Covid restrictions across the UK is proving more complicated by the day as lockdown measures for each nation, and regions within those nations, are increasingly at odds.

The UK is “three weeks behind” where it would have been in its battle with coronavirus because the government did not take on advice to enforce a “circuit break lockdown”, a member of the government’s Scientific Advisory Group for Emergencies (Sage) has told ITV News.

The Labour leader Sir Keir Starmer has said the government’s measures to tackle coronavirus are not working. He’s called for a short lockdown throughout England – or “circuit breaker” – as death rates rise sharply to the highest number since June.

Sir Keir said the measures imposed by Boris Johnson did not go far enough and the government was failing to listen to its own scientific advice.

Official documents reveal that scientific advisers called for a short lockdown some three weeks ago but their advice was rejected by ministers.

Documents released from a meeting of SAGE — the Scientific Advisory Group for Emergencies — said an immediate “circuit breaker”‘ was the best way to control cases — and slow the spread of the virus. They warned of a “catastrophic” situation with up to 3,000 deaths a day unless further measures were adopted.

Labour have mainly backed the government’s strategy up to now and their call for a new lockdown marks a significant change in that policy.