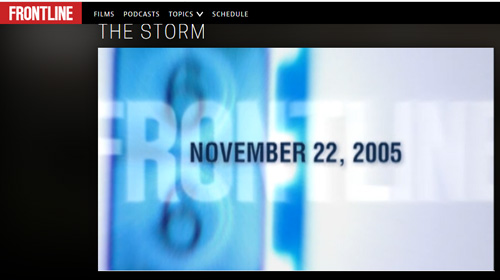 In the wake of Hurricane Katrina, FRONTLINE investigates the political storm surrounding the devastation of America’s Gulf Coast. Veteran FRONTLINE producer/reporter Martin Smith asks hard questions about the decisions leading up to the disaster and beyond. [Explore more stories on the original
website for The Storm.]

Nova Hurricane katrina the storm that drowned a city

Miami may be underwater by 2100

Miami is one of the first US cities to experience the effects of climate change. But they’re not the only one. Several locations around the world face a grim future if climate change remains unabated.

If the worst climate-change predictions come true, hundreds of coastal US towns and cities — from Atlantic City, New Jersey, to Galveston, Texas — could disappear underwater by 2100. The National Oceanic and Atmosphere Agency released a report in January that hinted at the possibility of an “extreme” sea-level-rise scenario that could cause chronic flooding to affect as many as 670 coastal communities. That scenario is considered unlikely but possible. The research group Climate Central took the projections laid out in NOAA’s report and created a plug-in for Google Earth that shows how catastrophic the damage would be if the flooding happened today. You can install it (directions here) and see anywhere in the US.

This is what sea level rise will do to coastal cities

Sea level rise is already redrawing coastlines around the world. What happens when the coast retreats through a major city? We look at how the world map will change in the year 2100, and what coastal cities can do to defend themselves. Correction: An early version of this video suggested that researchers expect to see four feet of sea level rise by the end of the century. While researchers do expect to see at least that level of sea level rise in the future, the exact timing is difficult to project. We regret the error.

Read more here: http://bit.ly/2ZwP5Se
You can learn more about Surging Seas and check how sea level rise may affect you here: http://ss2.climatecentral.org

In the quest to pump every drop of water outside city walls, New Orleans city planners inadvertently sank over half the city below sea level. Fifteen years after Hurricane Katrina, the city continues to slowly sink. But it’s also trying to adapt it tenuous relationship with water; officials and residents want to hold it at bay, sure, but they’re also trying to work with nature … as the city once had to.

New Orleans lies up to 10 feet below sea level and is surrounded by water. When a hurricane hits, the city is threatened from all sides. | For more

Ten years ago, the levees and flood walls meant to protect New Orleans failed against the force of Hurricane Katrina. Since the catastrophe, roughly $14 billion have been spent to upgrade the city’s storm defenses. But is that sufficient? William Brangham reports.

The Great Wall of Louisiana

The IHNC Lake Borgne Surge Barrier also called the Great Wall of Louisiana is a storm surge barrier constructed near the confluence of and across the Gulf Intracoastal Waterway and the Mississippi River Gulf Outlet near New Orleans. The barrier runs generally north-south from a point just east of Michoud Canal on the north bank of the GIWW and just south of the existing Bayou Bienvenue flood control structure. Navigation gates where the barrier crosses the GIWW and Bayou Bienvenue reduce the risk of storm surge coming from Lake Borgne and/or the Gulf of Mexico. Another navigation gate (Seabrook Floodgate) has been constructed in the Seabrook vicinity where the IHNC meets Lake Pontchartrain to block a storm surge from entering the IHNC from the Lake.