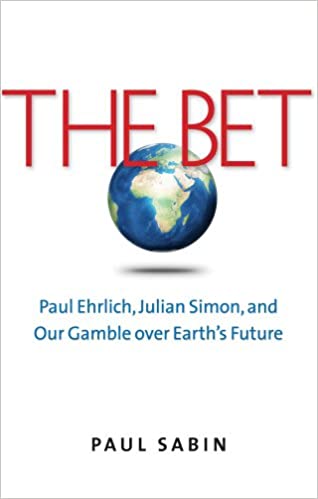 In 1980, the iconoclastic economist Julian Simon challenged celebrity biologist Paul Ehrlich to a bet. Their wager on the future prices of five metals captured the public’s imagination as a test of coming prosperity or doom. Ehrlich, author of the landmark book The Population Bomb, predicted that rising populations would cause overconsumption, resource scarcity, and famine—with apocalyptic consequences for humanity. Simon optimistically countered that human welfare would flourish thanks to flexible markets, technological change, and our collective ingenuity.
Simon and Ehrlich’s debate reflected a deepening national conflict over the future of the planet.

The Bet weaves the two men’s lives and ideas together with the era’s partisan political clashes over the environment and the role of government. In a lively narrative leading from the dawning environmentalism of the 1960s through the pivotal presidential contest between Jimmy Carter and Ronald Reagan and on into the 1990s, Paul Sabin shows how the fight between Ehrlich and Simon—between environmental fears and free-market confidence—helped create the gulf separating environmentalists and their critics today. Drawing insights from both sides, Sabin argues for using social values, rather than economic or biological absolutes, to guide society’s crucial choices relating to climate change, the planet’s health, and our own.

Paul Sabin is associate professor, Department of History, Yale University. He was founding director of the Environmental Leadership Program and is the author of Crude Politics: The California Oil Market, 1900–1940. 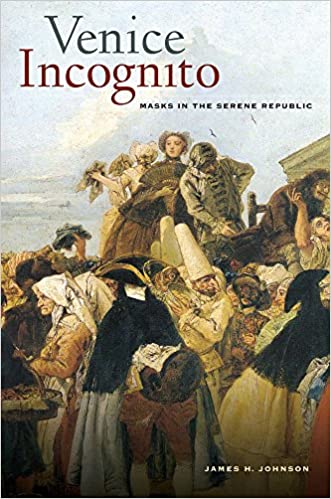 “The entire town is disguised,” declared a French tourist of eighteenth-century Venice. And, indeed, maskers of all ranks―nobles, clergy, imposters, seducers, con men―could be found mixing at every level of Venetian society. Even a pious nun donned a mask and male attire for her liaison with the libertine Casanova. In Venice Incognito, James H. Johnson offers a spirited analysis of masking in this carnival-loving city. He draws on a wealth of material to explore the world view of maskers, both during and outside of carnival, and reconstructs their logic: covering the face in public was a uniquely Venetian response to one of the most rigid class hierarchies in European history.

This vivid account goes beyond common views that masking was about forgetting the past and minding the muse of pleasure to offer fresh insight into the historical construction of identity.

As the highest-profile coronavirus patient in the world returns to the White House while still infectious and a danger to others, we speak with activist Kristin Urquiza, whose father died from COVID-19 earlier this year. She says President Trump’s minimizing of the disease is a slap in the face to families who have lost loved ones. “I was appalled,” says Urquiza. “Every single person out there who’s lost a loved one to COVID, who has seen up close and personal what this virus can do, felt the same way.” Urquiza, who spoke at the Democratic National Convention in August about her father, is co-founder of Marked by COVID, a project elevating the stories of Americans who have died in the pandemic.

Shocking medical experts, President Trump has returned to the White House while still infectious with the coronavirus and after more than a dozen people in Trump’s orbit have already tested positive for COVID-19. Emergency room physician Dr. Dara Kass says she was “horrified” by President Trump’s dismissive attitude toward a pandemic that has killed more than 200,000 people in the United States. “I had this virus,” says Dr. Kass. “I never left my bedroom without an N95 mask on my face, because I was petrified of giving it to my friends and family.”

Open and Transparent: Forest data setting the course for green future under the Paris Agreement

By the Gregory Brothers and Weird Al Yankovic
September 30, 2020

Three Scenarios for the Future of Climate Change | The New Yorker

Like millions of other Americans, I first learned about climate change in the summer of 1988. For its day, it was a scorcher: Yellowstone National Park burst into flames; the Mississippi River ran so low that almost four thousand barges got backed up at Memphis; and, for the first time in its history, Harvard University shut down owing to heat. It was on an afternoon when the mercury in Washington, D.C., hit ninety-eight degrees that James Hansen, then the head of NASA’s Goddard Institute for Space Studies, told a Senate committee that “the greenhouse effect has been detected and is changing our climate now.” Speaking to reporters after the hearing, Hansen went a step further: “It is time to stop waffling so much and say that the evidence is pretty strong that the greenhouse effect is here.”

Hansen’s warning was certainly not the first. A report to President Lyndon Johnson in 1965 noted that the effect of burning fossil fuels was likely to be “deleterious from the point of view of human beings.” Another report, prepared for the Department of Energy in 1979, predicted that even a relatively small increase in temperature could lead to the ultimate “disintegration” of the West Antarctic ice sheet, a process that would raise global sea levels by sixteen feet. A third report, also from 1979, found that, as carbon accumulated in the atmosphere, there was no doubt that the climate would change and “no reason to believe” that the change “will be negligible.” But, for some reason, when Hansen spoke up, on that sweltering afternoon in June, the story of climate change shifted. The Times ran its article at the top of page 1, under a three-column headline: “GLOBAL WARMING HAS BEGUN, EXPERT TELLS SENATE.” The following year, Bill McKibben published “The End of Nature,” first as a New Yorker piece under the rubric “Reflections,” and then, in longer form, as a book.

Had the words of either man been heeded in the intervening three decades, the world today would be a very different place—incalculably better off in innumerable ways. Instead, during that interval, some two hundred billion metric tons of carbon have been spewed into the atmosphere. (This is roughly as much CO2 as had been emitted from the start of the Industrial Revolution to that point.) Meanwhile, trillions of dollars have been sunk into coal-burning power plants, oil pipelines, gas pipelines, liquid-natural-gas export terminals, and a host of other fossil-fuel projects that, in a saner world, would never have been constructed. And global temperatures, as everyone can by now attest—though some still refuse to acknowledge—have continued to rise, to the point where the sweltering summer of 1988 no longer stands out as particularly hot. The nineteen-nineties were, on average, warmer than the eighties, the aughts hotter than the nineties, and the past decade hotter still. Each of the past five years has ranked among the warmest on record.

The New Yorker has run dozens of pieces on climate change. All might be described as “reflections” on this fundamental disconnect. Even as the consequences—rising seas, fiercer droughts, longer wildfire seasons, more devastating storms—have become daily news, global carbon emissions have continued to increase. In 2019, they reached a new record of ten billion metric tons. Emissions in India rose by almost two per cent, and in China by more than two per cent. In the United States, they actually dropped, by about 1.5 per cent. On November 4, 2019, the Trump Administration formally notified the United Nations that it planned to withdraw from the Paris climate accord, negotiated by the Obama Administration back in 2015. The very next day, a group called the Alliance of World Scientists released a statement, signed by eleven thousand researchers, warning that “the climate crisis has arrived and is accelerating faster than most scientists expected.”