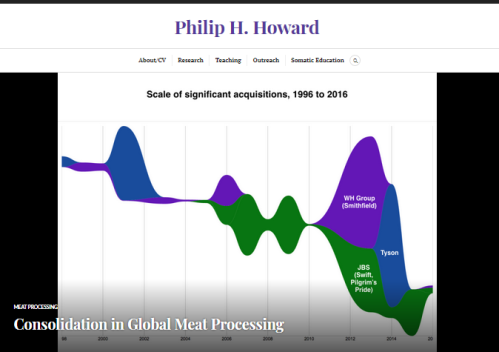 The three largest meat processors globally have dramatically increased in size in recent years. Government subsidies have played a critical role in increasing their power.

JBS, headquartered in Brazil, benefitted from partial ownership from government-owned banks, and low-interest loans to acquire competitors in other countries. The founder, José Batista Sobrinho, and five of his children are now all billionaires.

A government investigation of bribes to allow the sale of tainted meat in Brazil led to two of the founder’s sons to offer testimony in exchange for immunity from prosecution in March 2017. They admitted to spending hundreds of millions of dollars bribing thousands of politicians, and said that if they hadn’t, “It wouldn’t have worked. It wouldn’t have been so fast.” The firm was ordered to pay a $3.16 billion corruption fine, and subsequently announced plans to sell billions in assets, including Five Rivers Cattle Feeding in North America and Moy Park in Europe.