Fossil fuel production, COVID recovery, and just transitions The COVID-19 pandemic has led to worldwide disruptions to fossil fuel markets, as restrictions in economic and social activity and travel triggered the biggest shock to global fossil fuel consumption in seven decades. Employment levels in fossil fuel sectors have taken a big hit, and countries reliant on fossil fuel revenues have suffered especially painful social costs. How can countries recovering from the pandemic address these immediate job losses and shocks to government revenue, while still “building back better”? In this plenary session, panelists discuss the latest research on how governments are supporting fossil fuel and low-carbon energy in recovery strategies, and the resulting implications for fossil fuel production, greenhouse gas emissions, and economic recovery.

Further, panelists discuss approaches to building back better in the coal, oil, and gas sectors – from directing economic recovery funds to cleaning up abandoned oil and gas wells, to using the opportunity to reduce methane losses, to possible alternative economic development pathways that help bring about a just transition away from fossil fuels, in accordance with globally agreed climate goals.

While top U.S. health officials, including Dr. Anthony Fauci, testify before a Senate committee about the coronavirus response, President Donald Trump continues to claim a vaccine is just around the corner and mocks his adversary Joe Biden for wearing a mask.

Streamed live 37 minutes ago
Former Secretary of Labor Robert Reich sits down with Anand Giridharadas, author of Winners Take All, to discuss how the GOP’s hypocrisy on the Supreme Court underscores the dangers of minority rule. They dig into how those with power, from politicians to billionaires, leverage it to gain more — at the people’s expense.

Thank you for helping us reach 100,000 subscribers! We are truly grateful for your support.

Wolff Responds is a @Democracy At Work production. We provide these videos free of ads. Please consider supporting our work. Visit our website democracyatwork.info/donate or join our growing Patreon community and support Global Capitalism Live Economic Update with Richard D. Wolff at https://www.patreon.com/gcleu.

Learn more about Prof Wolff’s new book, The System is the Sickness: When Capitalism Fails to Save Us from Pandemics or Itself, available now at http://www.democracyatwork.info/books

They came in the holds of overcrowded ships, packed in among cargo and animals. They were sold to others to work as hard and under as dismal conditions as their owners chose. They were taken to the West Indies, to Barbados, to the American colonies, and beyond. A familiar story, is it not? But these immigrants, derived of all personal freedom, were Irish, and their servitude started long before black slavery was common. Even among those not enslaved, many were treated nearly the same as indentured servants, or later as contract labor on the railroads, mines, and other dangerous tasks. Your eyes will be opened by this book if you dare to allow them to be, as you learn more of this nearly forgotten part of world history. NOTE TO READERS FROM THE AUTHOR: This book contains quotes from written works and documents that have spelling other than the standardized spelling we use today. I did not correct this spelling. These are not typos or mistakes, as some readers have thought. They are merely historical differences.

Rhetta Akamatsu lives in Marietta, Ga with her husband. She has previously written about ghosts and blues music. Her heritage is partly Irish, and it is possible that at least one ancestor was an indentured servant in the 1600’s. Her interest in justice and human rights covers all people anywhere.

Against the Grain: A Deep History of the Earliest States: James C. Scott 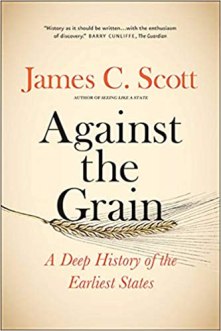 “History as it should be written.”—Barry Cunliffe, Guardian

“Scott hits the nail squarely on the head by exposing the staggering price our ancestors paid for civilization and political order.”—Walter Scheidel, Financial Times

Why did humans abandon hunting and gathering for sedentary communities dependent on livestock and cereal grains, and governed by precursors of today’s states? Most people believe that plant and animal domestication allowed humans, finally, to settle down and form agricultural villages, towns, and states, which made possible civilization, law, public order, and a presumably secure way of living. But archaeological and historical evidence challenges this narrative. The first agrarian states, says James C. Scott, were born of accumulations of domestications: first fire, then plants, livestock, subjects of the state, captives, and finally women in the patriarchal family—all of which can be viewed as a way of gaining control over reproduction.

Scott explores why we avoided sedentism and plow agriculture, the advantages of mobile subsistence, the unforeseeable disease epidemics arising from crowding plants, animals, and grain, and why all early states are based on millets and cereal grains and unfree labor. He also discusses the “barbarians” who long evaded state control, as a way of understanding continuing tension between states and nonsubject peoples.

James C. Scott is Sterling Professor of Political Science and codirector of the Agrarian Studies Program at Yale University. 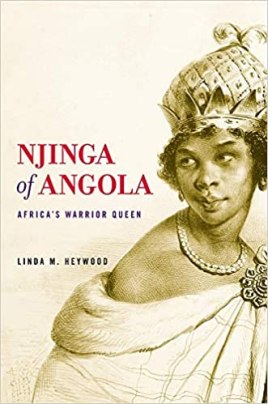 “The fascinating story of arguably the greatest queen in sub-Saharan African history, who surely deserves a place in the pantheon of revolutionary world leaders.”
―Henry Louis Gates, Jr.

Though largely unknown in the West, the seventeenth-century African queen Njinga was one of the most multifaceted rulers in history, a woman who rivaled Queen Elizabeth I in political cunning and military prowess. In this landmark book, based on nine years of research and drawing from missionary accounts, letters, and colonial records, Linda Heywood reveals how this legendary queen skillfully navigated―and ultimately transcended―the ruthless, male-dominated power struggles of her time.

“Queen Njinga of Angola has long been among the many heroes whom black diasporians have used to construct a pantheon and a usable past. Linda Heywood gives us a different Njinga―one brimming with all the qualities that made her the stuff of legend but also full of all the interests and inclinations that made her human. A thorough, serious, and long overdue study of a fascinating ruler, Njinga of Angola is an essential addition to the study of the black Atlantic world.”
―Ta-Nehisi Coates

“This fine biography attempts to reconcile her political acumen with the human sacrifices, infanticide, and slave trading by which she consolidated and projected power.”
―New Yorker

“Queen Njinga was by far the most successful of African rulers in resisting Portuguese colonialism… Tactically pious and unhesitatingly murderous…a commanding figure in velvet slippers and elephant hair ripe for big-screen treatment; and surely, as our social media age puts it, one badass woman.”
―Karen Shook, Times Higher Education

A Fistful of Shells: West Africa from the Rise of the Slave Trade to the Age of Revolution: Toby Green

By the time the “Scramble for Africa” among European colonial powers began in the late nineteenth century, Africa had already been globally connected for centuries. Its gold had fueled the economies of Europe and the Islamic world for nearly a millennium, and the sophisticated kingdoms spanning its west coast had traded with Europeans since the fifteenth century. Until at least 1650, this was a trade of equals, using a variety of currencies—most importantly, cowrie shells imported from the Maldives and nzimbu shells imported from Brazil. But, as the slave trade grew, African kingdoms began to lose prominence in the growing global economy. We have been living with the effects of this shift ever since.

With A Fistful of Shells, Toby Green transforms our view of West and West-Central Africa by reconstructing the world of these kingdoms, which revolved around trade, diplomacy, complex religious beliefs, and the production of art. Green shows how the slave trade led to economic disparities that caused African kingdoms to lose relative political and economic power. The concentration of money in the hands of Atlantic elites in and outside these kingdoms brought about a revolutionary nineteenth century in Africa, parallel to the upheavals then taking place in Europe and America. Yet political fragmentation following the fall of African aristocracies produced radically different results as European colonization took hold.

Drawing not just on written histories, but on archival research in nine countries, art, oral history, archaeology, and letters, Green lays bare the transformations that have shaped world politics and the global economy since the fifteenth century and paints a new and masterful portrait of West Africa, past and present.

A Fistful of Shells has been shortlisted for the Nayef Al- Rodhan Prize for Global Cultural Understanding, an annual £25,000 prize awarded by the British Academy to a non-fiction book which contributes to public understanding of world cultures. The other shortlisted writers are Kwame Anthony Appiah, Julian Baggini, Julia Lovell, Seema Malhotra, and Ed Morales. The book has also been shortlisted for the 2019 Cundill History Prize, run by McGill University in Canada, which has the largest purse in the world for a book of non-fiction in English; it is on a shortlist of 8 books for a prize awarded annually to the book that represents historical scholarship, originality and literary quality.

Toby Green is a lecturer at King’s College London.

After studying Philosophy, Toby Green worked as a writer and editor, publishing various books that have been translated into 12 languages. He then studied for his PhD at the Centre of West African Studies at Birmingham University, working with Paulo de Moraes Farias and completing in 2007, before coming to King’s in 2010.

After holding fellowships from the British Academy and the Leverhulme Trust, in 2015 he was recipient of a British Academy Rising Star Engagement Award. He has also been PI of research projects funded by the AHRC, British Library, European Union, and the Leverhulme Trust, and was awarded a Philip Leverhulme Prize for History in 2017. He has organised events in collaboration with institutions in Angola, Brazil, Ghana, Guinea-Bissau, Sierra Leone, and The Gambia.

The Vice-Chancellor’s Innovation Awards 2020 celebrate research-led innovation at all University levels that is having societal or economic impact. Now a series of online Innovation Conversations, taking place throughout September, offer the chance to hear more from each of the Winners, and ask questions about their award-winning research. The series will culminate on 7 October in a livestreamed panel discussion, chaired by Professor Chas Bountra, Pro-Vice-Chancellor for Innovation, asking ‘How do universities deliver economic value?’

Please note that there is no need to sign up in advance, although there is an email option for submitting advance questions.

Recordings of the talks will be available immediately after the broadcast on the same links.

You can find out more about the Awards and all of 2020’s Winners and Highly Commended entries on the Vice-Chancellor’s Innovation Awards pages.

I am delighted that in spite of the current circumstances we are able to celebrate the quality and breadth of research-led innovation across the University, albeit online rather than in person. It has been simply wonderful to see the calibre and the diversity of projects undertaken here in Oxford, even before our latest innovative responses to the challenges of COVID-19.

Professor Jonathan Prag (Vice-Chancellor’s Innovation Award Winner, Building Capacity Category) discusses bringing local communities into the archaeological process. Professor Jonathan Prag has been studying the history of ancient Sicily for twenty years. Over that time he has developed a digital, online, open access corpus (I.Sicily) as a research tool and the foundation for an innovative series of collaborations to make the material accessible to a much wider public. https://www.ox.ac.uk/research/innovat…