America’s Forgotten Slaves: The History of Native American Slavery in the New World and the United States: Charles River Editors: 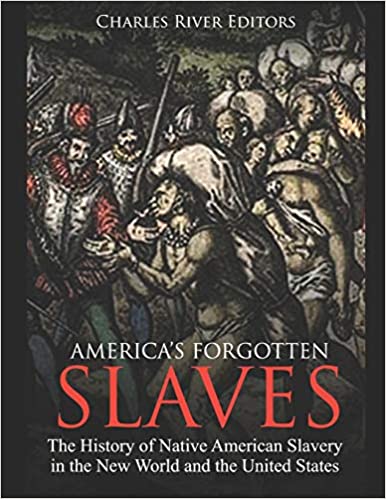 “The carrying of Negroes among the Indians has all along been thought detrimental, as an intimacy ought to be avoided.” – A passage from a 1751 South Carolina law
It has often been said that the greatest invention of all time was the sail, which facilitated the internationalization of the globe and thus ushered in the modern era. Columbus’ contact with the New World, alongside European maritime contact with the Far East, transformed human history, and in particular the history of Africa.

It was the sail that linked the continents of Africa and America, and thus it was also the sail that facilitated the greatest involuntary human migration of all time. The African slave trade is a complex and deeply divisive subject that has had a tendency to evolve according the political requirements of any given age, and is often touchable only with the correct distribution of culpability. It has for many years, therefore, been deemed singularly unpalatable to implicate Africans themselves in the perpetration of the institution, and only in recent years has the large-scale African involvement in both the Atlantic and Indian Ocean Slave Trades come to be an accepted fact.

There can, however, be no doubt that even though large numbers of indigenous Africans were liable, it was European ingenuity and greed that fundamentally drove the industrialization of the Transatlantic slave trade in response to massive new market demands created by their equally ruthless exploitation of the Americas.

What far less people are familiar with are the other forms of slavery in America, and the victims who were enslaved. Sizable numbers of Native Americans were enslaved, with some of them working alongside African slaves in the fields and others shipped off to the sugar islands. The total number of natives enslaved over the whole colonial period for both American continents is estimated at somewhere between 2.4 and 4.9 million, while estimates for North America north of Mexico are 141,000 to 340,000. These estimates do not seem to include slaves held by the native peoples themselves, nor do they include the serf-like status still a bit short of slavery that was imposed on millions of others.

Prior to the European colonization of what is now the United States, native groups themselves took captives. Men were often killed, and children were incorporated into their captors’ tribe, but there were hundreds of tribal peoples and many variants on the fate of captives. In the Pacific Northwest, slaves were killed in rituals, including being ritually cannibalized. After the arrival of the Europeans, the number of captives increased, and their fates became intertwined with the colonists and their African slaves.
In the Southwest, there was a slave trade in New Mexico and northern Mexico involving captives for use as domestic servants and sales to the silver mines in Mexico. The formidable Comanches were just another nomadic group until they were exposed to horses (probably from stock released during the Pueblo rebellion of 1680 in New Mexico). They formed a new culture and became an almost imperial force, which involved conducting raids for slaves.

Afro-Tejano slaves in Spanish Texas had different social circumstances than slaves held in the later Texas Republic. In the Southeast, slave raiding and trading involved the colonies of the English, Spanish and French. Moreover, several thousand free African Americans owned slaves and slavery in the United States did not end with freeing slaves in the South in 1865.

America’s Forgotten Slaves: The History of Native American Slavery in the New World and the United States examines the different systems of slavery practiced across America. Along with pictures depicting important people, places, and events, you will learn about America’s forgotten slaves like never before. 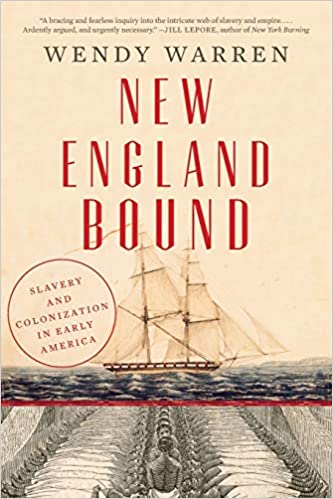 Widely hailed as a “powerfully written” history about America’s beginnings (Annette Gordon-Reed), New England Bound fundamentally changes the story of America’s seventeenth-century origins. Building on the works of giants like Bernard Bailyn and Edmund S. Morgan, Wendy Warren has not only “mastered that scholarship” but has now rendered it in “an original way, and deepened the story” (New York Times Book Review). While earlier histories of slavery largely confine themselves to the South, Warren’s “panoptical exploration” (Christian Science Monitor) links the growth of the northern colonies to the slave trade and examines the complicity of New England’s leading families, demonstrating how the region’s economy derived its vitality from the slave trading ships coursing through its ports.

And even while New England Bound explains the way in which the Atlantic slave trade drove the colonization of New England, it also brings to light, in many cases for the first time ever, the lives of the thousands of reluctant Indian and African slaves who found themselves forced into the project of building that city on a hill. We encounter enslaved Africans working side jobs as con artists, enslaved Indians who protested their banishment to sugar islands, enslaved Africans who set fire to their owners’ homes and goods, and enslaved Africans who saved their owners’ lives. In Warren’s meticulous, compelling, and hard-won recovery of such forgotten lives, the true variety of chattel slavery in the Americas comes to light, and New England Bound becomes the new standard for understanding colonial America.

“This book is an original achievement, the kind of history that chastens our historical memory as it makes us wiser.” ―David W. Blight, author of Frederick Douglass: Prophet of Freedom

Finalist for the Pulitzer Prize 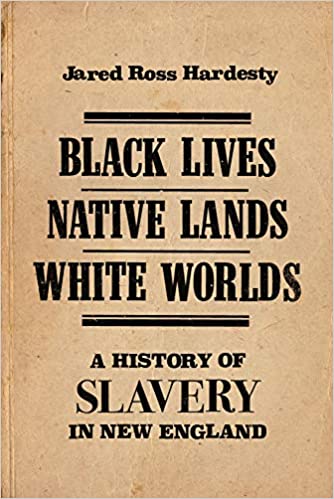 Shortly after the first Europeans arrived in seventeenth-century New England, they began to import Africans and capture the area’s indigenous peoples as slaves. By the eve of the American Revolution, enslaved people comprised only about 4 percent of the population, but slavery had become instrumental to the region’s economy and had shaped its cultural traditions. This story of slavery in New England has been little told.

In this concise yet comprehensive history, Jared Ross Hardesty focuses on the individual stories of enslaved people, bringing their experiences to life. He also explores larger issues such as the importance of slavery to the colonization of the region and to agriculture and industry, New England’s deep connections to Caribbean plantation societies, and the significance of emancipation movements in the era of the American Revolution. Thoroughly researched and engagingly written, Black Lives, Native Lands, White Worlds is a must-read for anyone interested in the history of New England. 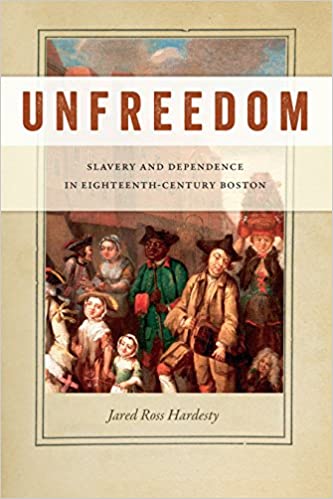 Reveals the lived experience of slaves in eighteenth-century Boston

Instead of relying on the traditional dichotomy of slavery and freedom, Hardesty argues we should understand slavery in Boston as part of a continuum of unfreedom. In this context, African slavery existed alongside many other forms of oppression, including Native American slavery, indentured servitude, apprenticeship, and pauper apprenticeship. In this hierarchical and inherently unfree world, enslaved Bostonians were more concerned with their everyday treatment and honor than with emancipation, as they pushed for autonomy, protected their families and communities, and demanded a place in society.

Drawing on exhaustive research in colonial legal records – including wills, court documents, and minutes of governmental bodies – as well as newspapers, church records, and other contemporaneous sources, Hardesty masterfully reconstructs an eighteenth-century Atlantic world of unfreedom that stretched from Europe to Africa to America. By reassessing the lives of enslaved Bostonians as part of a social order structured by ties of dependence, Hardesty not only demonstrates how African slaves were able to decode their new homeland and shape the terms of their enslavement, but also tells the story of how marginalized peoples engrained themselves in the very fabric of colonial American society.

Isaias slams into North Carolina as Category One storm

Hurricane Isaias slammed into North Carolina Monday as a Category One storm, with winds of up to 85 miles (140 kilometers) an hour, the US National Hurricane Center said.

Why James Baldwin’s work is attracting renewed attention in 2020

Sunday marked what would have been literary icon James Baldwin’s 96th birthday, in a year when the resurgence of Black Lives Matter protests across the world has renewed interest in his work. A new book, “Begin Again: James Baldwin’s America and Its Urgent Lessons for Our Own,” explores Baldwin’s ideas in current context. Amna Nawaz talks to its author, Eddie Glaude Jr. of Princeton University.

As the national conversation about race continues, Washington Post Live brings together two American style icons to talk about inequality and exploitation in fashion, music and American society at large. Supermodel, activist and CEO Beverly Johnson will discuss her trailblazing career, including being the first African American woman on the cover of Vogue. She will be joined by designer, activist and philanthropist,

Ivanka And Jared Pocket MILLIONS From Massive Conflicts Of Interest

Ivanka Trump and Jared Kushner managed to pocket a staggering $36 million in 2019, in spite of the fact that they are just simple White House advisers. This information was released late Friday evening in a financial disclosure form that the couple was hoping would be buried in the news cycle. But the massive conflicts of interest of the two cannot be ignored, as Ring of Fire’s Farron Cousins explains. Link – https://www.alternet.org/2020/08/ivan…

Watch highlights of MSNBC’s coverage on Mary Trump’s new book ‘Too Much and Never Enough: How My Family Created the World’s Most Dangerous Man’. Aired on 8/4/2020.

As you move through a city, you probably notice summer heat can be a lot worse depending on which neighborhood you’re in. This isn’t a coincidence.

Says study co-author Vivek Shandas – “when we studied 108 cities across the country we found a systematic pattern that the redlined communities were today, on average, about seven degrees hotter than their non redlined counterparts.”

Maybe you’ve heard of the “urban heat island” effect, where cities are significantly hotter than surrounding areas. Urban landscapes, particularly roadways with black asphalt, large buildings, turn solar radiation into heat. These features absorb the heat from the sun during the day. In the evening, when temperatures are supposed to cool down, the retained heat is released back into the neighborhood. Redlined neighborhoods were more likely to be slotted for freeways, while green-coded neighborhoods were more likely to be given parks.

Resources: The study on heat and redlining: The Effects of Historical Housing Policies on Resident Exposure to Intra-Urban Heat: A Study of 108 US Urban Areas – Jeremy S. Hoffman, Vivek Shandas and Nicholas Pendleton https://www.mdpi.com/2225-1154/8/1/12…

All about Urban Heat Islands from Climate Central [PDF]: http://assets.climatecentral.org/pdfs…