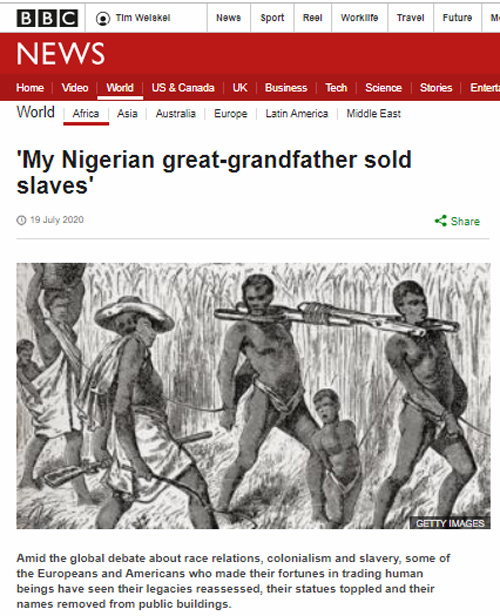 Amid the global debate about race relations, colonialism and slavery, some of the Europeans and Americans who made their fortunes in trading human beings have seen their legacies reassessed, their statues toppled and their names removed from public buildings.

Nigerian journalist and novelist Adaobi Tricia Nwaubani writes that one of her ancestors sold slaves, but argues that he should not be judged by today’s standards or values.

My great-grandfather, Nwaubani Ogogo Oriaku, was what I prefer to call a businessman, from the Igbo ethnic group of south-eastern Nigeria. He dealt in a number of goods, including tobacco and palm produce. He also sold human beings.

“He had agents who captured slaves from different places and brought them to him,” my father told me.

Nwaubani Ogogo’s slaves were sold through the ports of Calabar and Bonny in the south of what is today known as Nigeria.

People from ethnic groups along the coast, such as the Efik and Ijaw, usually acted as stevedores for the white merchants and as middlemen for Igbo traders like my great-grandfather.

They loaded and offloaded ships and supplied the foreigners with food and other provisions. They negotiated prices for slaves from the hinterlands, then collected royalties from both the sellers and buyers.

About 1.5 million Igbo slaves were shipped across the Atlantic Ocean between the 15th and 19th Centuries.

More than 1.5 million Africans were shipped to what was then called the New World – the Americas – through the Calabar port, in the Bight of Bonny, making it one of the largest points of exit during the transatlantic trade. 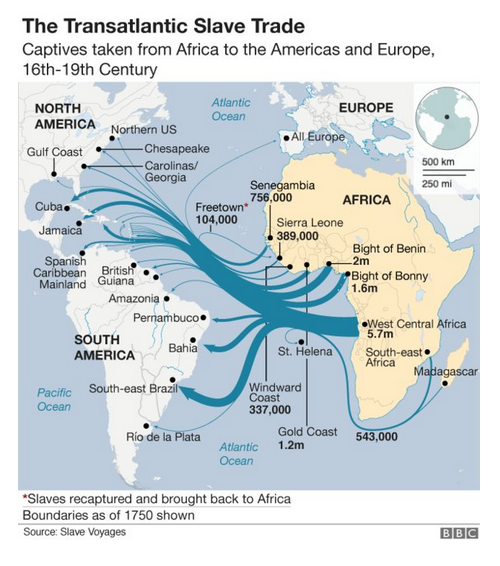 The only life they knew

Nwaubani Ogogo lived in a time when the fittest survived and the bravest excelled. The concept of “all men are created equal” was completely alien to traditional religion and law in his society.

t would be unfair to judge a 19th Century man by 21st Century principles.

Assessing the people of Africa’s past by today’s standards would compel us to cast the majority of our heroes as villains, denying us the right to fully celebrate anyone who was not influenced by Western ideology.

Igbo slave traders like my great-grandfather did not suffer any crisis of social acceptance or legality. They did not need any religious or scientific justifications for their actions. They were simply living the life into which they were raised.

That was all they knew.