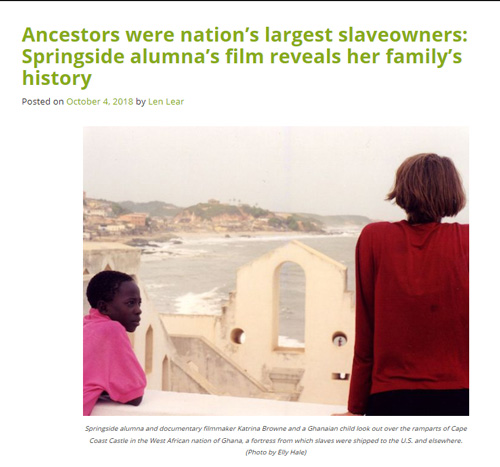 alumna and documentary filmmaker Katrina Browne and a Ghanaian child look out over the ramparts of Cape Coast Castle in the West African nation of Ghana, a fortress from which slaves were shipped to the U.S. and elsewhere. (Photo by Elly Hale)

Many of us have family members or even ancestors with which we are not too proud. But for Katrina Browne, it goes way beyond that. Browne, 50, graduated from Springside School (now Springside Chestnut Hill Academy) in 1985. Her mother, Elizabeth (“Libby”) Sturges Browne, grew up in Chestnut Hill, as did Libby’s father, the Rev. Philemon Sturges, who was rector of St. Martin-in-the- Fields Episcopal Church. (Elizabeth and her sisters also went to Springside.)

Browne’s grandmother, Rosalind Howe Sturges, a renowned artist, created the Chestnut Hill Local masthead drawing in the early or mid-1960s that is still used today. She also did many drawings and pictorial maps of the area. The Chestnut Hill scenes of places she memorialized before they were destroyed can be found at the C.H. Historical Society.

Browne earned a degree from Princeton University in Anthropology in 1990 and an M.A. in Theology from the Pacific School of Religion, where she wrote a thesis on film and democratic dialogue. “I wasn’t pursuing ordination (to the ministry),” she told us last month, “but I was seeking my next ‘calling’ after having worked really hard in my early 20s co-founding one of the first national AmeriCorps programs called Public Allies. It is still going strong, and Michelle Obama was the founding director of the Chicago office/program site.”

In 1995, however, Browne’s grandmother, who was then 88 (she died in 1999), wrote a short booklet summarizing their family history for all of her grandchildren. What she wrote was a virtual stick of dynamite that blew up Browne’s world and set it on a totally different path that has continued to this day. “I am so grateful that she didn’t fail to include this horrible part of our story,” said Browne. “It was a sacred act on her part as an elder.”

What the booklet revealed was that the Sturges’ ancestors, the DeWolfs, were the largest slave-trading family in U.S. history! Given the myth that the South is solely responsible for slavery, family members were shocked to learn that their ancestors, Northerners from Rhode Island, were so deeply involved in the slave trade. Browne and her relatives learned that while the DeWolfs were one of only a few “slaving” dynasties, the network of commercial activities that they were tied to involved an enormous portion of the Northern population.