On 23 March 2020, President Cyril Ramaphosa announced a new measure to combat the spread of the Covid-19 coronavirus in South Africa – a three-week nationwide lockdown with severe restrictions on travel and movement, supported by the South African National Defence Force – from midnight on Thursday, 26 March, to midnight on Thursday, 16 April. The President said more needed to be done to avoid “an enormous catastrophe” among the population.

In essence, this meant people would only be allowed to leave their homes to buy food, seek medical help or under other extreme circumstances.

The lockdown follows government regulations that limited public gatherings, travel from high-risk countries and the sale of alcohol.

In addition, borders were closed to reduce the rate of infection from those travelling into South Africa from other countries. A quarantine was also enforced on inbound travellers and returning citizens.

GENEVA, June 11 (Reuters) – The coronavirus pandemic is accelerating in Africa, spreading to the hinterland from capital cities where it arrived with travellers, the World Health Organization said on Thursday.

But the WHO said there was no indication that severe cases and deaths were being missed, nor has the virus caused significant infections in refugee camps across the continent.

Ten countries are driving Africa’s epidemic, accounting for 75% of the some 207,600 cases on the continent, with 5,000 deaths reported, according to Matshidiso Moeti, WHO’s Africa regional director.

South Africa, which last month began a phased easing of the lockdown, is the hardest-hit, accounting for a quarter of all cases, she said.

“Even though these cases in Africa account for less than 3 percent of the global total, it’s clear that the pandemic is accelerating,” Moeti told a news briefing for Geneva-based U.N. correspondents. “We believe that large numbers of severe cases and deaths are not being missed in Africa.”

Africa’s population is relatively youthful and many countries had already established “point of entry” screening measures against Ebola fever – two factors which may have so far limited the spread of COVID-19, she said.

But lockdowns and market closures intended to contain coronavirus contagion have taken a heavy toll on marginalised communities and low-income families, Moeti said.

A major challenge on the continent remains the availability of test kits, Moeti said.

“Until such time as we have access to an effective vaccine, I’m afraid we’ll probably have to live with a steady increase in the region, with some hotspots having to be managed in a number of countries, as is happening now in South Africa, Algeria, Cameroon for example, which require very strong public health measures, social distancing measures to take place.” (Reporting by Stephanie Nebehay; Editing by Mark Heinrich) 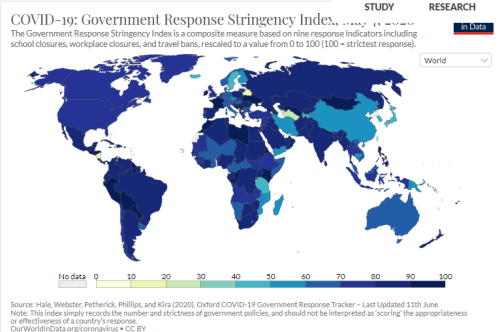 Governments are taking a wide range of measures in response to the COVID-19 outbreak. This tool aims to track and compare policy responses around the world, rigorously and consistently.

The Oxford COVID-19 Government Response Tracker (OxCGRT) systematically collects information on several different common policy responses that governments have taken to respond to the pandemic on 17 indicators such as school closures and travel restrictions. It now has data from more than 160 countries. The data is also used to inform a ‘Lockdown rollback checklist’ which looks at how closely countries meet four of the six World Health Organisation recommendations for relaxing ‘lockdown’.

The data from the 17 indicators is aggregated into a set of four common indices, reporting a number between 1 and 100 to reflect the level of government action on the topics in question:

Note that these indices simply record the number and strictness of government policies, and should not be interpreted as ‘scoring’ the appropriateness or effectiveness of a country’s response. A higher position in an index does not necessarily mean that a country’s response is ‘better’ than others lower on the index.

For data journalists and researchers

This data is provided free of charge. However, please consider contributing to the COVID-19 Fund for the World Health Organisation. You can also find out more about supporting the work of the Blavatnik School of Government.

Climate One
11 June 2020
The national uprising ignited by the murder of George Floyd has cast a spotlight on the country’s embedded, institutional racism, including the fraught relationship between environmentalism and communities of color. Air pollution, severe weather and the economic upheaval brought on by climate change impacts black and minority communities first and worst, yet their voices are often left out of policy responses and market solutions. How can we amplify and advocate for leaders of color in the fight against climate change? What can allies do to create a green movement that is inclusive and actively anti-racist?

Join us for a conversation with Mustafa Santiago Ali, vice president of environmental justice at the National Wildlife Federation, Robert Bullard, distinguished professor of urban planning and environmental policy at Texas Southern University and winner of the 2019 Stephen Schneider Award for Outstanding Climate Science Communication, and Glynda Carr, President and CEO of Higher Heights for America.

The number of confirmed U.S. coronavirus cases has officially topped 2 million as states continue to ease stay-at-home orders and reopen their economies and more than a dozen see a surge in new infections. “I worry that what we’ve seen so far is an undercount and what we’re seeing now is really just the beginning of another wave of infections spreading across the country,” says Dr. Craig Spencer, director of global health in emergency medicine at Columbia University Medical Center.

Launch of the Secretary-General’s Roadmap for Digital Cooperation

We cannot reap the full benefits of the digital age without mobilizing the global cooperation and governance needed to mitigate its potential harms. The UN Secretary-General’s Roadmap for #DigitalCooperation lays out actions for the global community to CONNECT, RESPECT, and PROTECT people in the digital age. Tune in for this high-level launch event with UN Secretary-General Antonio Guterres, together with Heads of State, CEOs and civil society leaders to discuss how to ensure a safe and inclusive digital future for all. Learn more at: un.org/digital-roadmap 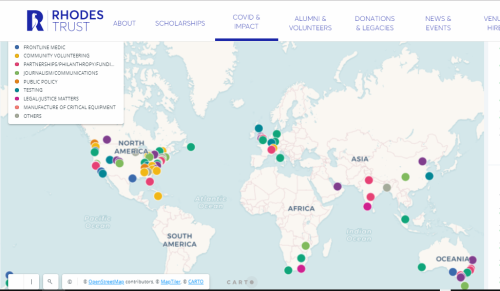 The Coronavirus pandemic has reinforced what we already knew – Rhodes Scholars step up to serve others. Across geographic and disciplinary borders, Scholars have been collaborating in research, clinical care, journalism, community volunteering, philanthropy, and a myriad of other ways to tackle the hugely difficult challenges of this global virus. Click here or on the map below to read some of these remarkable profiles.

Through this digital tool, we have been able to connect in real time Rhodes Scholars and Fellows from our partnership programmes who are seeking or offering collaborators, research partners, advice, contacts, or resources.