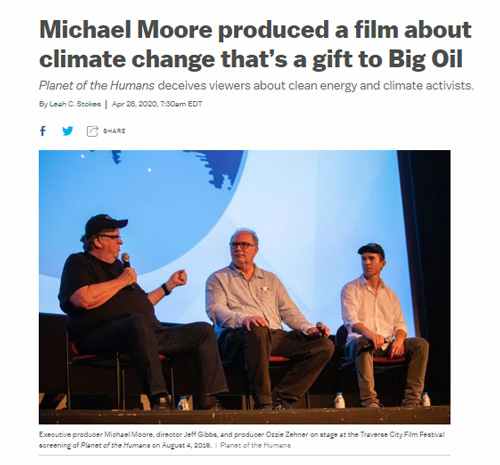 Planet of the Humans deceives viewers about clean energy and climate activists.

Last week marked the 50th anniversary of Earth Day. To celebrate the occasion, filmmaker Michael Moore dropped a new movie he produced, Planet of the Humans. In less than a week, it has racked up over 3 million views on YouTube.

But the film, directed by Jeff Gibbs, a long-time Moore collaborator, is not the climate message we’ve all been waiting for — it’s a nihilistic take, riddled with errors about clean energy and climate activism. With very little evidence, it claims that renewables are disastrous and that environmental groups are corrupt.

What’s more, it has nothing to say about fossil fuel corporations, who have pushed climate denial and blocked progress on climate policy for decades. Given the film’s loose relationship to facts, I’m not even sure it should be classified as a documentary.

There are real tradeoffs in the clean energy transition. As a scholar, I’ve done my fair share of research and writing on those exact issues over the past decade. Renewables have downsides. As do biomass, nuclear, hydropower, batteries, and transmission. There is no perfect solution to our energy challenges.

But this film does not grapple with these thorny questions; it peddles falsehoods. Films for Action, an online library of free progressive films, agrees with me. It briefly pulled the movie from its site, after documentary filmmaker Josh Fox wrote an open letter, co-signed by climate scientists and energy experts.

“We are disheartened and dismayed to report that the film is full of misinformation — so much so that for half a day we removed the film from the site,” Films for Action’s April 25 statement reads. “Ultimately, we decided to put it back up because we believe media literacy, critique and debate is the best solution to misinformation.”

Here, I will lay out the case for why this film should have stayed on the cutting room floor.

The film has several factual errors about clean energy

It’s not surprising that the film gets basic energy facts wrong and that information included is out of date: There are hardly any climate or energy experts featured.

Early in the film, Gibbs goes to see an electric vehicle demonstration. He concludes they are dirty because they probably run on coal.

Except it’s not true. Two years ago, electric vehicles already had lower emissions than new gas-powered cars across the country. This is because the US electricity system has been slowly getting cleaner over the past decade.

What made solar panels so cheap? Thank government policy.

The film’s wind and solar facts are also old. It quotes efficiency for solar PV from more than a decade ago. And it doesn’t mention the fact that solar costs have plummeted since then, and that we’ve learned how to get more wind and solar onto the grid. The film instead acts like this is impossible to do.

The largest share of the movie’s scorn goes to biomass — generally, burning wood — which supplied less than 2 percent of the US electricity mix last year. But the filmmakers obscure that fact, showing graphs that imply biomass is leading to forest destruction across the US.