Police at Protests Are Concealing Their Identities | NowThis

Police at protests across the U.S. are hiding their badge numbers, names, and other forms of identification, making it even harder to hold officers accountable for violence and misconduct.

Pope Francis Speaks Out About the Killing of George Floyd | NowThis

‘We cannot tolerate or turn a blind eye to racism and exclusion in any form’ — Listen to Pope Francis condemn the killing of George Floyd and call for protests to remain peaceful.

In US news and current events today, listen to Pope Francis condemn the killing of George Floyd during a weekly prayer at the Vatican. According to a CNN Vatican expert, it is rare for popes to mention a specific individual by name in such prayers.

Sign up for our newsletter KnowThis to get the biggest stories of the day delivered straight to your inbox: https://go.nowth.is/KnowThis In US news and current events today, watch former President Barack Obama address the George Floyd protests, Black Lives Matter movement, and share words of solidarity and encouragement amid a national movement. For more George Floyd protest coverage and U.S. politics, subscribe to NowThis News.

What the George Floyd protests say about America

Guardian US reporter Kenya Evelyn explains why the unrest sparked by the police killing of George Floyd could be a defining moment for racial politics in America, and how the coronavirus pandemic set the backdrop for the protests Inside the George Floyd protests in New York:

There’s renewed anger in the United States over police violence. Footage has emerged of a 75-year-old demonstrator, protesting the death of George Floyd, being pushed to the ground by officers and suffering serious head injuries.

It happened in the city of Buffalo, in upstate New York. The two officers involved have been suspended.

Protests have continued across America after the death of Mr Floyd, who died at the hands of four police officers, in the city of Minneapolis last month.

The World’s biggest concentrated solar power plant at the moment is in Morocco, Africa. It is located outside Ouarzazate. It is called the Noor Solar Plant.

Gemasolar is a 19.9 MWe thermosolar power plant with 120 MWt molten salt central receiver. Solar field of 310,000 m2 mirror surface. Solar thermal energy collected and stored in molten salts for 15 hours of production, and steam turbine with 3 pressure levels. Gemasolar is the first commercial plant in the world to use the high temperature tower receiver technology together with molten salt thermal storage of very long duration.

The heliostats set up around the tower reflect and concentrate solar energy onto the molten salt receiver located at the top of the tower. In the receiver, solar energy is transferred to the molten salts circulating inside, which reach a temperature of 565 ºC. By means of a steam generation system, the molten salts produce overheated steam, that runs a turbine/alternator group to generate electrical energy which then is fed into the power grid. The Gemasolar plant design has been optimised using the SENSOL, a programe developed by SENER that defines the heliostats positioning in the solar field.

Outside Tonopah, Nev., a construction team of 600 is working to get the Crescent Dunes Solar Energy project up and running by 2014. WIRED has an exclusive look inside the 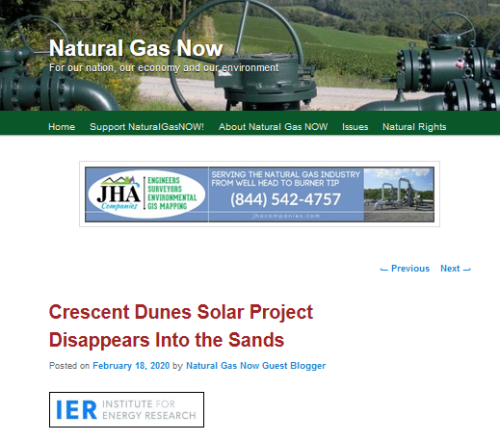 How many times do politicians have to learn they aren’t good at picking winners and losers? Crescent Dunes is the latest solar failure and humility hint.

The Nevada solar-energy plant Crescent Dunes has gone under after receiving a $737 million federal loan guarantee during the Obama Administration. Crescent Dunes, a 110-megawatt facility, was supposed to use molten salt to store heat from the sun, produce steam, and generate electricity even when the sun was not shining.

The Department of Energy finalized its loan guarantee on Sept. 23, 2011—a week before the federal loan program expired. Just prior to the finalization of the loan guarantee, Nevada approved $119.3 million in tax abatements for Crescent Dunes over 20 years. The plant also received roughly $140 million in private investment. NV Energy, the largest electric utility in Nevada, agreed to buy the electricity under a 25-year power purchase agreement.

Crescent Dunes began commercial operation in November 2015, missing the deadline established by its agreement with NV Energy. But, less than a year later, the facility went offline because of a massive leak in the hot salt tank. Crescent Dunes resumed operations in the latter half of 2017, but had frequent and prolonged outages. Because of Crescent Dunes’ performance problems, NV Energy was at risk in meeting its renewable portfolio standard obligations.

In the summer of 2019, Crescent Dunes’ hot salt tanks had a catastrophic failure, causing ground contamination and requiring the removal of the solar tower that is needed for the plant to generate electricity as designed, halting operations. The Department of Energy sent a formal default notice in September, followed by NV Energy terminating its power purchase agreement.

How the Technology Works

Crescent Dunes has a solar receiver that sits on a tower and absorbs sunlight from over 10,000 mirrors. The mirrors magnify the sun’s power 1,200 times, heating salt to high temperatures. The molten salt circulates through the tower and is then used to heat a steam cycle that generates electricity. The plant also uses an automated system that controls the flow of molten salt to the receiver.

Plant operators manage dozens of valves and pumps to start, stop, and adjust the collection of solar energy and control electricity production. Even with changing weather patterns, the molten salt is supposed to heat over 60 million pounds of salt each day to reach 1,050 degrees Fahrenheit. The salt continually circulates in a loop, enabling its reuse by storing it in tanks for use at a later time.

Crescent Dunes was designed to meet peak energy demand, extending into the evening hours until about midnight. The plant’s energy storage integration delivers solar energy captured during the day to the grid during the late afternoon and evening when the demand for power is at its highest. According to the Department of Energy, the molten salt absorbs 90 percent of the solar energy it receives and is used as both a heat transfer fluid and a storage medium.

Information Available to the Obama Administration

In September 2011, the Energy Department indicated that Crescent Dunes would be the first of its kind in the United States and the tallest molten salt tower in the world based on Solar Two, a 10-megawatt test facility in the Mojave Desert decommissioned in 1999 that had shown it was technically feasible to use molten salt to store and generate power. However, in a 2006 report, the Energy Department said the pilot plant was never expected to be a viable commercial-scale plant and, in fact, did not validate economic feasibility. The Crescent Dunes project shows that government investments under the Obama Administration were based on politics more than feasibility.

Like Solyndra, Crescent Dunes is another Obama Administration failure in solar energy development. Despite Crescent Dunes’ power being priced over 4 times as high as the nearest photovoltaic plant in Nevada, the Obama Administration chose to invest in it with taxpayers’ money to further its development of renewable technology. It is well known that the government has a poor track record for picking winners and losers, and Solyndra and Crescent Dunes are notable examples. Americans should be cautious about government attempts to pursue technology in the name of climate change, a recipe for many more Crescent Dunes fiascoes.

Editor’s Notes: All we have to do to lower emissions and deliver cleaner air along with energy affordability and security is to let the market work and continue to develop our natural gas resources. It’s simple, but there’s no graft, so politicians refuse to learn. They could display just a little humility, though, don’t you think?