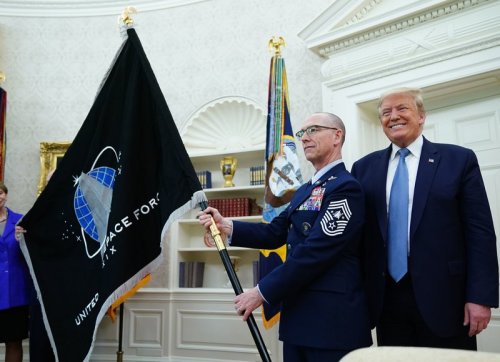 Standing alongside senior leaders of the military, Trump called the unfurling a “very special moment.”

The flag design comes from the seal of the Space Force, which was approved by the president in January. It sparked some Star Trekfan outrage for what some people have called its similarity to a logo in the science fiction franchise.

According to the White House, the dark blue and white of the flag is meant to represent the “vast recesses of outer space” and includes a elliptical orbit with three large stars meant to symbolize the branch’s purpose: “organizing, training and equipping” Space Force troopers, in the language of the Pentagon.

The Space Force was created in part to protect strategic American space infrastructure, including communications, navigation and spy satellites, from adversaries such as Russia and China.