Fighting a locust plague amid Covid-19 in east Africa

The recent coronavirus pandemic is only exacerbating the problems currently facing herders, also known as pastoralists, in Kenya. They’ve seen their livestock devastated and crops destroyed after the worst locust invasions in 70 years and villagers are bracing themselves for another swarm, 400 times larger if left unchecked. With less vegetation for grazing, herders can sometimes infringe on neighbours land, causing violent conflict. We follow Josephine Ekiru, a peace-builder, who is trying to help as economic insecurity caused by the pandemic fuels attacks

Standing alongside senior leaders of the military, Trump called the unfurling a “very special moment.”

The flag design comes from the seal of the Space Force, which was approved by the president in January. It sparked some Star Trekfan outrage for what some people have called its similarity to a logo in the science fiction franchise.

According to the White House, the dark blue and white of the flag is meant to represent the “vast recesses of outer space” and includes a elliptical orbit with three large stars meant to symbolize the branch’s purpose: “organizing, training and equipping” Space Force troopers, in the language of the Pentagon.

The Space Force was created in part to protect strategic American space infrastructure, including communications, navigation and spy satellites, from adversaries such as Russia and China.

Could the reproduction number of SARS-CoV-2 be double early estimates? | Harvard Magazine 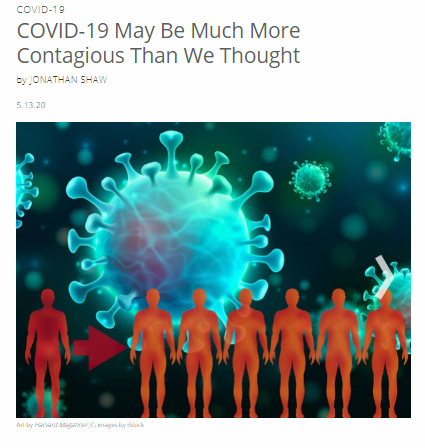 Workers at a Native health care center reached out to county, state, and federal agencies for more PPE and supplies to fight COVID-19 — they received body bags instead.

In US news and current events today, Abigail Echo-Hawk works for the Seattle Indian Health Board, which serves 6k American Indians and Alaska Natives. She reached out to State and Federal agencies for more PPE, but when a delivery came, the boxes only contained body bags.

Trump: ‘We could cut off relationship with China’

US president Donald Trump says he could ‘cut off’ the relationship with China following the coronavirus outbreak. In an interview wth Fox Business, Trump expressed his disappointment with China for failing to contain the Covid-19 outbreak before adding he maintained a good relationship with leader, Xi Jinping, but ‘right now, I don’t want to speak with him’

And now to some strong comments from U.S. President Donald Trump.
He’s warning the U.S. might “cut off its whole relationship” with China as the two superpowers continue to raise the stakes in their verbal rhetoric tit-for-tat, especially over the COVID-19 pandemic.
Lee Seung-jae with more.

In the latest escalation with China,… President Trump is warning he could “cut off the whole relationship” with Beijing,… adding there are “many things” Washington could do.
Speaking on Fox Business’ ‘Mornings with Maria’ on Thursday,… President Trump said slashing ties with China would save the United States 500 billion dollars.

While he did not explain what he meant by cutting ties with China,… some White House officials are urging him to remove Chinese companies from U.S. supply chains.

The latest remark is in line with his intensified criticism of the Chinese government’s handling of the COVID-19 pandemic.

He has also previously suggested that Beijing should be forced to pay a price for covering up the outbreak in the early stages.

President Trump also responded to the World Trade Organization chief’s abrupt resignation on Thursday,… calling the organization “horrible”,… adding that the WTO has been treating China as a developing nation,… hence giving them benefits the U.S. doesn’t get.

Meanwhile, during an interview with Israeli broadcaster KAN on Thursday,… U.S. Secretary of State Mike Pompeo called on Israel to stop Chinese investments and partnerships.

China has been developing a number of Israeli infrastructure projects,… including water, ports, and transport,… as part of its Belt and Road Initiative,… which extends to over 70 nations in Asia, Africa and Europe.

This comes as the FBI stated that the bureau is investigating “the targeting and compromise” of organizations conducting research to develop vaccines and other treatments for the virus.
If true,… it would not be the first time China has attempted to steal medical information.

Trump threatens to cut off relationship with China over COVID-19

U.S. President Donald Trump has escalated his rhetoric towards China over the pandemic. In a TV interview, he threatened to cut off the entire relationship with Beijing, claiming it would save Washington 500 billion U.S. dollars. He also repeated unproven allegations about the origins of the coronavirus. But a former White House official in the Trump administration is blaming the U.S. leader for the severity of the crisis.

As the coronavirus sweeps the world, people are beginning to realize the great destructive potential of tiny microbes to human health and society. The pandemic also evoked memories of the previous incidents surrounding biological experiments. This is why recently, a U.S. military laboratory, Fort Detrick in Maryland has become the center of a heated discussion.

The UN Human Rights chief warns some governments are taking advantage of emergency powers imposed during the pandemic to stifle dissent. Michelle Bachelet said some governments are using lockdowns and curfews to crack down on political foes, human rights defenders and journalists. She said the response to the pandemic should be “driven by science-based facts”, rather than politics or the economy.

“Can Democracy Survive the Pandemic?”: Election Hangs in the Balance as T rump Attacks Mail-In Voting

The coronavirus pandemic poses unprecedented challenges to the November presidential election, as President Trump and the GOP capitalize on the moment to attack voting rights. We speak with Emily Bazelon, staff writer at The New York Times Magazine, whose new cover story examines the bureaucratic and political challenges of mobilizing widespread vote-by-mail by November. We also speak with Jena Griswold, secretary of state of Colorado, which already has universal vote-by-mail and the second-highest voter turnout in the country.