We’re often told that the United States is, was, and always has been a Christian nation. But in One Nation Under God, historian Kevin M. Kruse reveals that the belief that America is fundamentally and formally Christian originated in the 1930s.

To fight the “slavery” of FDR’s New Deal, businessmen enlisted religious activists in a campaign for “freedom under God” that culminated in the election of their ally Dwight Eisenhower in 1952. The new president revolutionized the role of religion in American politics. He inaugurated new traditions like the National Prayer Breakfast, as Congress added the phrase “under God” to the Pledge of Allegiance and made “In God We Trust” the country’s first official motto. Church membership soon soared to an all-time high of 69 percent. Americans across the religious and political spectrum agreed that their country was “one nation under God.”

Provocative and authoritative, One Nation Under God reveals how an unholy alliance of money, religion, and politics created a false origin story that continues to define and divide American politics to this day. 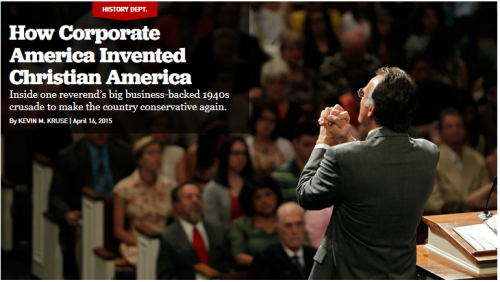 Kevin M. Kruse is a professor of history at Princeton and the author, most recently, of One Nation Under God: How Corporate America Invented Christian America, from which this article has been adapted.

In December 1940, as America was emerging from the Great Depression, more than 5,000 industrialists from across the nation made their yearly pilgrimage to the Waldorf-Astoria Hotel in New York City, convening for the annual meeting of the National Association of Manufacturers. The program promised an impressive slate of speakers: titans at General Motors, General Electric, Standard Oil, Mutual Life, and Sears, Roebuck; popular lecturers such as etiquette expert Emily Post and renowned philosopher-historian Will Durant; even FBI director J. Edgar Hoover. Tucked away near the end of the program was a name few knew initially, but one everyone would be talking about by the convention’s end: Reverend James W. Fifield Jr.

Handsome, tall, and somewhat gangly, the 41-year-old Congregationalist minister bore more than a passing resemblance to Jimmy Stewart. Addressing the crowd of business leaders, Fifield delivered a passionate defense of the American system of free enterprise and a withering assault on its perceived enemies in Franklin D. Roosevelt’s administration. Decrying the New Deal’s “encroachment upon our American freedoms,” the minister listed a litany of sins committed by the Democratic government, ranging from its devaluation of currency to its disrespect for the Supreme Court. Singling out the regulatory state for condemnation, he denounced “the multitude of federal agencies attached to the executive branch” and warned ominously of “the menace of autocracy approaching through bureaucracy.” 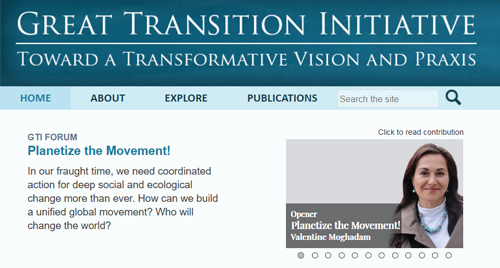 The Great Transition Initiative is an online forum of ideas and an international network for the critical exploration of concepts, strategies, and visions for a transition to a future of enriched lives, human solidarity, and a resilient biosphere. By enhancing scholarly discourse and public awareness of possibilities arising from converging social, economic, and environmental crises, and by fostering a broad network of thinkers and doers, it aims to contribute to a new praxis for global transformation.

Correspondingly, GTI maintains a cosmopolitan outlook that is attuned to critical questions of scale and the ways nested systems operate across global, regional, and local levels. It gives voice to diverse contributors motivated by both ethical and pragmatic concerns about the need for revised ways of thinking, learning, acting, and being. It aims to deepen understanding of values and cultural dimensions of global change, along with social, economic, political, and scientific aspects of a Great Transition.

Legalize Democracy is a 30 minute documentary about Move to Amend. Fast-paced and action-oriented, this DVD is a great tool for folks looking to get involved in Move to Amend or help spread the word. Produced by Move to Amend, Directed by Dennis Trainor, Jr., financed by grassroots donations.

A further 3.2 million Americans sought unemployment benefits last week as the economic toll from the coronavirus pandemic continued to mount.

The new applications brought the total number of jobless claims since mid-March to 33.3 million- or about 20% of the US workforce.

The number of new claims reported each week by the Department of Labor has subsided since hitting a peak of 6.9 million in March.

But they remain extraordinarily high.

And the number of people collecting benefits has continued to rise, despite recent moves to start re-opening in some parts of the country.

“The significant rise in continuing claims … is a little disappointing since it suggests few people are being recalled to work,” said Paul Ashworth, chief US economist at Capital Economics.

More than 300 Indians stranded by the coronavirus lockdown have arrived home on flights from Dubai in the United Arab Emirates (UAE).

Passengers arrived in Kerala state on two flights from Abu Dhabi and Dubai, and went into quarantine

India suspended all international travel in March before it went into lockdown to curb Covid-19 infections.

Nearly 15,000 Indians are expected to return on special Air India flights from 12 countries over the next week.

Passengers have to pay their own fares. They are being tested before boarding flights.

Flights from the US and UK which were due to arrive back on Thursday, for instance, were delayed as Covid-19 tests on crew were not done in time, local media reported.

Radford: Latinos Are Being Affected By COVID-19 More Than Other Ethnicities | MSNBC

Coronavirus is affecting Latino Americans in major cities harder than other ethnicities. NBC’s Morgan Radford said, “Here in New York Latinos are dying from COVID at a rate that is twice as high as their white counterparts, but that’s also happening in the Midwest.” Aired on 5/13/2020.

Permanent quarantine? How Big Tech plans to profit from COVID-19

In her new report for The Intercept on the “Screen New Deal,” Naomi Klein looks at how the future we’re being rushed into by the coronavirus pandemic could transform our lives by making elements of daily life under quarantine permanent, in order to benefit billionaires in the tech industry. Klein examines the case of New York, where state officials are courting tech billionaires like former Google CEO Eric Schmidt and former mayor Michael Bloomberg to deal with the fallout of the COVID-19 crisis through public-private partnerships. “They see huge opportunities in telehealth, in the educational market in public schools, in supporting us working from home,” says Klein. “They’re not looking for a traditional reopening, but rather a new paradigm where the privileged classes who are able to isolate themselves basically get everything … either delivered through digital streaming or by drone.”