Amid Shutdowns, Youth Climate Activists Are Writing the Curriculum for a Just Economic Recovery – Yes! Magazine 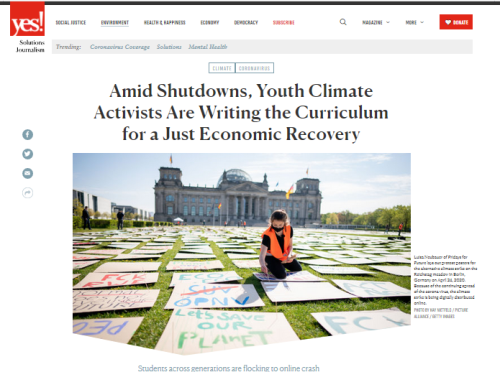 On any given weekday before the coronavirus pandemic hit, Michelle Cohen could be found in her Los Angeles office advising students on how to apply for an apprenticeship, or which classes they need to take before earning a high school equivalency diploma. But when public schools in the district shifted to online learning in March, Cohen, who has been an educator for more than 20 years, decided to embrace a new role as a student, in a class led by two instructors who were decades younger than her.

Cohen, who is 53, felt a little uncomfortable at first. Some of the other students in the Zoom classroom were clad in matching pajama sets, sitting knee-to-knee on the floor with siblings, with twin beds and movie posters behind them. “Am I a weirdo?” she asked herself, thinking she could be her classmates’ mother, even grandmother. Eventually, in a breakout room, Cohen was relieved to find that plenty of other adults were in the class, some of whom were older than her.

Sunrise School, as it’s called, is an online training program the youth-led climate activist organization the Sunrise Movement pulled together as soon as it became clear that students would be stuck at home for the spring semester. The group has three levels of online learning experiences designed to train thousands of new leaders in how to push elected officials to pass a Green New Deal.

Cohen enrolled in “The Green New Deal & Coronavirus Crash Course,” an intro class, and showed up every day at 6 p.m. for the four sessions. Amid California’s shelter-in-place order, it felt good to see the same group of people every night, dialing in from across the U.S. and Canada. Her teachers, Genai Lewis and Simon Metcalf, both in their mid-20s, explained what the class would cover with a set of minimalist slides splashed with text and borders in the yellow, black, and white customary of the Sunrise Movement’s T-shirts and protest banners.