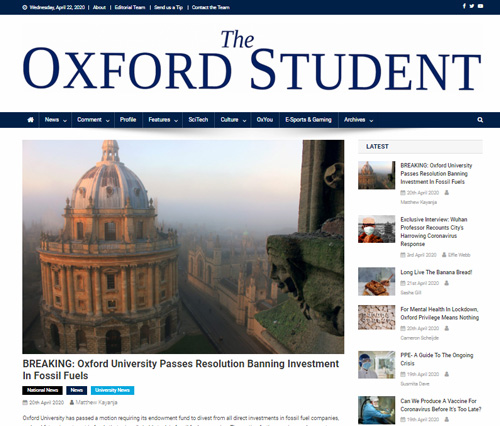 The resolution was passed by Congregation, a decision-making body of the university made up of 5500 academic staff, members of governing bodies of colleges and societies as well as senior research, computing, library and administrative staff. Members were given until noon on the 20th of April to oppose or amend the resolution before a meeting of Congregation on the 28th of April, but with no such action being given by this time via email or post the motion was duly passed.

Scripture, Culture, and Agriculture: An Agrarian Reading Of The Bible: Davis, Ellen F.

This book examines the theology and ethics of land use, especially the practices of modern industrialized agriculture, in light of critical biblical exegesis. Nine interrelated essays explore the biblical writers’ pervasive concern for the care of arable land against the background of the geography, social structures, and religious thought of ancient Israel. This approach consistently brings out neglected aspects of texts, both poetry and prose, that are central to Jewish and Christian traditions.

Rather than seeking solutions from the past, Davis creates a conversation between ancient texts and contemporary agrarian writers; thus she provides a fresh perspective from which to view the destructive practices and assumptions that now dominate the global food economy. The biblical exegesis is wide-ranging and sophisticated; the language is literate and accessible to a broad audience.

In this intimate conversation between Krista and one of her beloved teachers, we ponder the world and our place in it, through sacred text, with fresh eyes. We’re accompanied by the meditative and prophetic poetry of Wendell Berry, read for us from his home in Kentucky: “Stay away from anything / that obscures the place it is in. / There are no unsacred places; / there are only sacred places / and desecrated places. / Accept what comes of silence.”

Premiere in progress. Started 20 minutes ago

An investigation into the U.S. response to COVID-19, from Washington State to Washington, D.C.

Shadows of Liberty reveals the extraordinary truth behind the news media: censorship, cover-ups, and corporate control.

In this episode of The Common Good, Former Secretary of Labor Robert Reich discusses the astroturf anti-lockdown protests that sprouted up over the weekend, the history of astroturfing and its connections to the Tea Party movement, how Trump is using the fake protests to distract from his failed coronavirus response, and how the media is taking Trump’s bait and enabling his deception

The new documentary “Shadows of Liberty” had its U.S. premiere last night at the National Conference for Media Reform in Denver. Using individual cases of journalists whose attempts to tell their stories have been muzzled by corporations and the government, the film shows how a corporate-controlled media can silence the truth about issues ranging from war to labor practices. In one instance, CBS refused to re-air an investigation by the prize-winning journalist Roberta Baskin on Nike’s use of sweatshop labor in Vietnam

90% of the media in the USA are controlled by five big for-profit-conglomerats, creating a media monopoly that manipulates our political, economical, and social world. Shadows of Liberty reveals the extraordinary truth behind the news media: censorship, cover-ups and corporate control.

How the Strategic Communication Labs/Cambridge Analytica scandal leads to the heart of the British establishment with Liam O’Hare. Yes this is a scandal about Facebook and data. But it’s also a scandal about networks of unaccountable power influencing democratic elections and it leads to the very heart of the British government. It’s time now for the British government and ministry of defence to come clean about exactly what ties it has now or has previously had with Strategic Communication Laboratories. This story has important consequences for how elections, referenda and our democracy works. Liam O’Hare is journalist & producer who has worked for Al Jazeera, The Independent, The Guardian, The Herald and Bella Caledonia email: liamohare7@gmail.com follow: https://twitter.com/Liam_O_Hare

CGTN’s Mike Walter spoke with Carl Larry, a market specialist with the analytical firm Refiniti, about the oil industry crash