As the coronavirus upends life in the U.S., a renowned Pulitzer Prize winning historian says the virus’s impact on history and American politics is still wider than many may realize – rivaling World War II itself. Historian Doris Kearns Goodwin says “no other event in our lifetimes” since that war recalls comparable destruction, danger and dread, and just and like today’s population living through this pandemic, the World War II generation “didn’t know how it was going to end.” That uncertainty stokes widespread fear, Goodwin tells MSNBC’s Ari Melber, and makes it likely that the coronavirus and federal response will be crucial to the 2020 election. She also contrasts President Franklin Delano Roosevelt’s emphasis on sacrifice with President Trump’s crisis response.

David Quammen is the author of Spillover: Animal Infections and the Next Human Pandemic, which eerily predicted the kind of zoonotic virus outbreaks that we’re seeing right now. In this interview, we talk about his experience tracking ebola in Africa in 2007, why bats make such great hosts for viruses, and why we’ll be seeing more outbreaks like this in the future.

David Quammen: How Animal-Borne Infections Spill Over To Humans : NPR

NPR’s Scott Simon talks to writer David Quammen about his research into animal-to-human transmission of viruses.

The novel coronavirus originated in Wuhan, China, where it’s thought to have jumped from wild animals to humans maybe in open-air markets. David Quammen warned about exactly such a potential outbreak in his 2012 book “Spillover: Animal Infections And The Next Human Pandemic.” David Quammen joins us now from his home in Bozeman, Mont. David, thanks so much for being with us.

DAVID QUAMMEN: Thank you, Scott. Good to be with you in this weird and difficult time.

SIMON: Yeah, well said. So you were not surprised?

QUAMMEN: I was surprised by one thing. I was surprised by how unprepared we were. The idea that a new virus, a coronavirus, might come to us from a wild animal, probably a bat, maybe in a wet market, oh, for instance, in China, none of that was surprising. That was all what sort of a composite of the potential events that scientists were telling me 10 years ago when I was researching my book.

SIMON: We’ve seen this happen, obviously, in – over the past generation – AIDS, West Nile fever, SARS, Ebola. Why does wild-animal-to-human transmission happen? How does it happen?

QUAMMEN: Well, it happens by human contact with wild animals. Every species of wild animal living in our diverse ecosystems and our remnants of ecosystems carries viruses. And many of them carry a lot of viruses of which most are unique to the human species. So as we come in contact with those animals – hunting them, cutting down their habitat, building timber camps, building mining camps in those diverse ecosystems – we offer ourselves as an alternative host to them. If a species is becoming endangered and going extinct, the viruses in that have a chance to transfer to a new host. They will seize that opportunity. And if they transfer to humans and are able to replicate and spread, then they have, as one scientist has told me, they’ve seized the golden ticket. They’re now in the world’s most abundant large animal, and they’ve achieved great evolutionary success. This virus now has achieved great evolutionary success.

SIMON: Is it becoming more frequent?

QUAMMEN: It does seem to becoming more frequent. There are some metrics on that. Since 1960, there have been a number of these spillovers of pathogens, usually viruses, from wild animals into humans. As we become more abundant, we’re consuming more. We’re travelling more. We’re disturbing wild ecosystems, coming into contact with wild animals more. And so, yes, these spillovers are becoming more abundant. And when they happen, they’re – some of them are becoming more catastrophic.

SIMON: And what do you make of efforts around the world to try and control the outbreak?

SIMON: And what are those lessons that maybe we haven’t learned yet?

QUAMMEN: Well, we need technology that will give us fast and accurate diagnostic kits so that, for instance, a person could be tested for a new virus with a cheek swab while going through airport security screening in the time that it takes to, you know, take off your shoes and put your computer on the belt, come out the other side. Ten years ago, a scientist was telling me he was working to develop that sort of testing, but we don’t have it yet. We need that badly. And then we need big investments in public health – excess capacity for our hospitals. But excess capacity is expensive, but politicians are reluctant to invest in preparedness against something that might or might not happen on their watch.

SIMON: And that, of course, introduces the question – is there a way to to prevent another pandemic – or I’ll just call it the next pandemic – or is it just a matter of being better prepared to deal with it?

A key climate summit in Glasgow will be delayed until next year due to disruption caused by the coronavirus.

The announcement was made in a joint statement from the UK and UN after a “virtual” meeting of officials.

Dozens of world leaders were due to attend the COP26 gathering that was set to run in Glasgow from November 9 this year.

It is expected that the conference will now take place by the middle of next year.

As the virus has spread around the world, there has been a growing expectation in recent weeks that the COP26 talks would be delayed.

Around 30,000 delegates, journalists and environmental campaigners were due in Scotland for the meeting.

However the changing priorities that coronavirus has forced on governments can be clearly seen in Glasgow’s Scottish Events Campus (SEC) which was due to host the talks.

It is now set to become a temporary hospital to house patients affected by Covid-19.

The decision to move COP26 was taken by UN officials, including UN climate chief Patricia Espinosa and UK Business Secretary Alok Sharma, who is president-designate of the meeting.

“The world is currently facing an unprecedented global challenge and countries are rightly focusing their efforts on saving lives and fighting Covid-19,” Mr Sharma said in a statement.

“That is why we have decided to reschedule COP26.”

“We will continue working tirelessly with our partners to deliver the ambition needed to tackle the climate crisis and I look forward to agreeing a new date for the conference.” 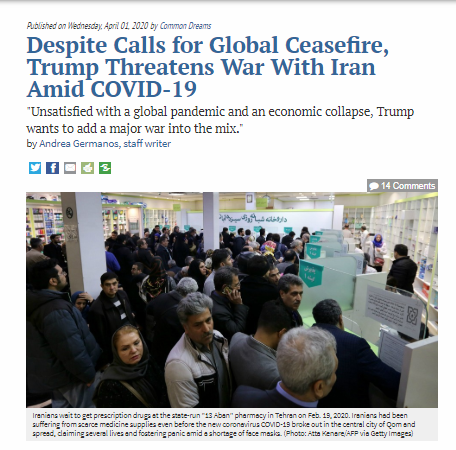 “Unsatisfied with a global pandemic and an economic collapse, Trump wants to add a major war into the mix.”

As the coronavirus pandemic wreaks havoc on world economies, claims tens of thousands of lives, and cripples healthcare systems worldwide, President Donald Trump took to Twitter Wednesday to threaten to attack Iran and make the country “pay a very heavy price” for any “attack on U.S. troops and/or assets in Iraq.”

The threat comes on the heels of the Trump administration crippling Iran’s access to crucial medial supplies as it battles over 47,000 confirmed cases of COVID-19 by ramping up a sanctions regime on Iran that leading economists said was “feeding the coronavirus epidemic” and progressive organizations and Democrats said must be eased in light of the deadly disease.

“Unsatisfied with a global pandemic and an economic collapse, Trump wants to add a major war into the mix,” Stephen Miles, executive director of Win Without War, said on Twitter in response to Trump’s tweet.

Miles detailed “a series of escalations” the White House has taken with Iran since Trump took office, including his 2018 formal departure from the Iranian nuclear deal.

“It’s impossible to say with certainty right now what is happening on the ground that’s leading to this latest talk of war, but one thing is clear, we did not have to be here,” said Miles. “The President chose to put us on this path and he continues to own the consequences of his actions.”

Trita Parsi, executive vice president of the Quincy Institute for Responsible Statecraft, also weighed in on Trump’s latest threat with a tweet pointing to how actions the adminstration has undertaken to purportedly rein in Iranian aggression have backfired, citing the January assassination of Iranian general Qassem Soleimani as one example.

in the United States — but only if the strictest quarantine measures are kept in place. President Donald Trump, who this week extended social distancing guidelines through the end of April, said the worst is yet to come.

The White House is now estimating 100,000 to a quarter of a million people could die from the coronavirus pandemic. Some of those most concerned about exposure to the highly infectious virus are workers on the frontlines of grocery stores and delivery services. On Monday, Amazon warehouse workers in Staten Island walked off the job, and the company fired one of them in response. At least three employees at a large UPS facility near Boston have tested positive, and two dozen more have been quarantined. Details about the infections were shared by the workers’ union because they said the company refused to provide the critical information to its employees. We speak with Richard Hooker, secretary-treasurer of the Philadelphia Teamsters Local 623, and David Levin, lead organizer with Teamsters for a Democratic Union and the coordinator of the UPS Teamsters United campaign.

In Italy’s south, the contagion and deaths could overwhelm a health service which is much less well equipped than in the rich north. FRANCE 24’s Seema Gupta tells us more.