Millions of homeless people and migrant labourers have been left in the lurch after India announced a 21-day lockdown in a bid to contain the spread of coronavirus in the country. With factories and construction sites closing down, many have expressed fears that they would starve to death. State governments have announced that they will open centres to feed these people, but have been overwhelmed. Many have opted to walk hundreds of miles to their villages as public transport has been suspended. Video by Varun Nayar

The U.S. is now the worst-affected country in the world as #coronavirus cases surpassed 100,000. U.S. President Donald #Trump has received #criticism for his slow response to the epidemic. Infectious disease expert Dennis Carrol, who is the former director of the U.S. Agency for International Development’s Global Health Security and Development Unit, said Trump’s administration has failed to “effectively communicate to everyone that this is a shared risk.” 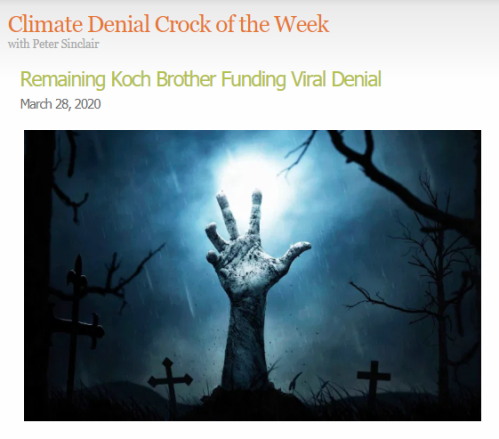 Remaining Koch brother, even with one foot in the grave, still reaching out to keep Americans from following best science and health practice to socially distance in what is clearly a global crisis.

They are truly merchants of Death.

Americans for Prosperity, founded and funded by Charles Koch, has blasted shelter-in-place orders in several states.

Libertarian billionaire Charles Koch is actively fighting during the coronavirus crisis engulfing the United States and the world — but rather than fighting against the virus’ spread, his group is pushing for businesses to stay open and an end to shelter-in-place orders.

Americans for Prosperity, which Koch founded and funds, released a statement last week urging businesses to remain open, The Intercept reported, as states across the U.S. began shutting down nonessential businesses in an effort to slow the spread of the virus.

“Rather than blanket shutdowns, the government should allow businesses to continue to adapt and innovate to produce the goods and services Americans need, while continuing to do everything they can to protect the public health,” Emily Seidel, chief executive of AFP, wrote in a press release.

AFP is speaking out at the state level as well, according to the report: “Some of the group’s state chapters have taken a similar tone. AFP Pennsylvania’s state director, as well as a regional director with the group, have taken to Twitter to lambast shelter-in-place policies.”

“All businesses are essential — to the people who own them, the people who work in them, and the communities they serve,” Annie Patnaude, the Michigan state director for AFP, said in response to the order.

But public health officials have maintained that such measures are necessary if the country hopes to avoid overwhelming its hospital systems with coronavirus patients.

“Experts around the country have called for

shelter-in-place policies for nonessential businesses, arguing that social isolation can drastically curb the spread of the coronavirus,” The Intercept noted. “Slowing the pandemic, they say, can save lives by lowering the demand for medical supplies and limited hospital beds.”

House Speaker Nancy Pelosi reacts to Donald Trump’s signing statement accompanying the passage of the coronavirus relief package in which he seems to set aside provisions for oversight of the distribution of funds. Aired on 3/27/20.

Museums are closed around the world, but the art isn’t

Governors are desperately trying to source hospital beds, staff, ventilators, gloves, masks and other equipment amidst the coronavirus crisis. At Friday’s Coronavirus Task Force briefing, President Trump suggested that if they want federal help, they should be more “appreciative” of his efforts. Here’s how governors are coping.

Lambeth UNISON shop steward Tim O’Dell explains how they libraries are dangerous carriers of coronavirus through books being exchanged, and how they shut down all 10 libraries in Lambeth using Section 44 of the Employment Rights Act 1996. Filmed at the UK organised online meeting, “Workplace collective action to slow coronavirus”, attended by 140 people. Time to get organised. Join the facebook group: Coronavirus Support Group for Workers