London is not under lockdown, but Prime Minister Boris Johnson ordered schools, pubs, and other social venues to close, except for delivery and take out, and people have been warned to stay indoors whenever possible. Frank Langfitt, NPR correspondent and author of “The Shanghai Free Taxi: Journeys with the Hustlers and Rebels of the New China,” joins Hari Sreenivasan with more.

What trends are researchers seeing in coronavirus research?

An interactive map tracking the number of coronavirus cases globally in near real time has become an important tool for researchers, health officials and the public at large. It was created by Johns Hopkins engineering professor Lauren Gardner and her graduate student Ensheng Dong. Hari Sreenivasan spoke to Gardner about how the interactive map works and what trends they are seeing.

One night in 1971, files were stolen from an F.B.I. office near Philadelphia. They proved that the bureau was spying on thousands of Americans. The case was unsolved, until now.

“How to Hide an Empire”: Daniel Immerwahr on the History of the Greater United States

“How to Hide an Empire: A History of the Greater United States.” That’s the title of a new book examining a part of the U.S. that is often overlooked: the nation’s overseas territories from Puerto Rico to Guam, former territories like the Philippines, and its hundreds of military bases scattered across the globe. We speak with the book’s author, Daniel Immerwahr, who writes, “At various times, the inhabitants of the U.S. Empire have been shot, shelled, starved, interned, dispossessed, tortured and experimented on. What they haven’t been, by and large, is seen.” Immerwahr is an associate professor of history at Northwestern University.

Solidarity Not Charity: Mutual Aid & How to Organize in the Age of Coronavirus

As lockdowns and layoffs sweep the U.S., mutual aid groups are forming to protect and provide for the vulnerable, including the elderly, incarcerated, undocumented and unhoused. We look at the incredible community networks across the country that are coming together to protect their neighbors during the coronavirus pandemic — and how you can get involved. From Washington state to the Bay Area, Arizona, Colorado, Minnesota and New York City, thousands of mutual aid efforts are aimed at building solidarity, not charity. We speak with two longtime mutual aid organizers and activists in two hot spots of the pandemic. In New York City, Mariame Kaba is a longtime organizer, abolitionist, education and the founder of the grassroots organization Project NIA, which works to end the incarceration of children and young adults. She has raised tens of thousands of dollars and redistributed it to groups across the country in response to the coronavirus pandemic, and she just did a public conference call with Congressmember Alexandria Ocasio-Cortez on mutual aid. In Seattle, Washington, Dean Spade is an associate professor at Seattle University School of Law and founder of the Sylvia Rivera Law Project. He is the creator of mutual aid resource website Big Door Brigade.

“This Is a War,” Says Doctor on COVID-19. “We Are at the Beginning of a Surge, and It’s Terrifying.”

We continue our interview with Stanford University’s global health expert Dr. Michele Barry, an infectious disease doctor, with an in-depth look at the response in the United States to the coronavirus and how it compares to other countries, why she calls it a “ticking time bomb” for Africa, why testing is so important, whether it is safe to take ibuprofen, the race to find the best potential treatments, and much more.

As the worldwide death toll from the coronavirus pandemic has topped 10,000, with over 250,000 confirmed cases of COVID-19, we speak with Stanford University’s global health expert Dr. Michele Barry, an infectious disease doctor. Italy has surpassed China in coronavirus deaths, and cases are rising in the Middle East, Africa and Latin America, as the governor of California has ordered all 40 million residents to shelter in place.

Posts on social media from friends and relatives say he died of coronavirus but this is not confirmed.

His fans called him the king of soukous – a high-tempo Congolese dance music popular across Africa.

His daughter, French singer Liza Monet, tweeted on Thursday that her father had died of coronavirus. “I am inconsolable” she wrote.

Fellow member of the supergroup Loketo, Mav Cacharel, also said on Facebook that he had died of coronavirus.

His manager, Jimmy Ouetenou, however, told BBC Afrique that it was not confirmed he died of coronavirus and that he had long-term health problems.

He was admitted to hospital on Thursday and died on the same day.

Mabélé, whose real name is Aurélien Miatsonama, was from Congo-Brazzaville and moved to France in the 1980s.

His hits include the track Embargo. 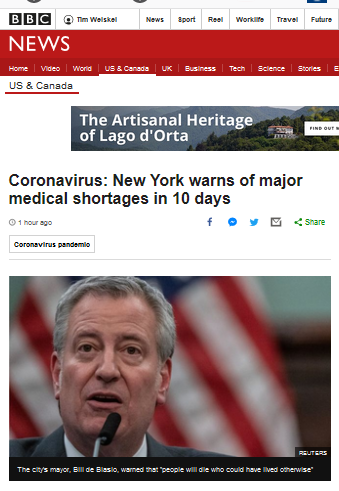 The coronavirus outbreak in New York will get worse, with damage accelerated by shortages of key medical supplies, the city’s mayor has said.

“We’re about 10 days away from seeing widespread shortages,” Bill de Blasio said on Sunday. “If we don’t get more ventilators people will die.”

New York state has become the epicentre of the outbreak in the US and accounts for almost half of the country’s cases.

On Sunday, the state’s Governor Andrew Cuomo said 15,168 people had tested positive for the virus., an increase of more than 4,000 from the previous day.

“All Americans deserve the blunt truth,” Mr de Blasio told NBC News. “It’s only getting worse, and in fact April and May are going to be a lot worse.”

Cameras in space tell stories of life on our planet from a brand new perspective. Earth’s surface is covered in weird and wonderful patterns. The Australian outback is covered in pale spots, the work of wombats; a clearing in the endless green canopy of the Congo rainforest has been created by an incredible elephant gathering; and the twists and turns of the Amazon make a home for rehabilitated manatees. This is our home, as we’ve never seen it before.