James Hansen, Ph.D. – The Coming Climate Catastrophe and Our Last Chance to Save Humanity – Offstage

The Real Truth About Health

James Hansen is an esteemed adjunct professor from America. At present, he professes at Columbia University in the department of Earth & Environmental Sciences. The former head of NASA Goddard Institute for Space Studies, Hansen is famous as “father of global warming” given his citations on early warning signs in 1980s regarding the contemporary burning issue of global warming. He is also a very ardent climate activist.

James Edward Hansen was born on March 29, 1941 to James Ivan Hansen & Gladys Ray Hansen in Denison, Iowa. He was deeply inspired by Red Giants and White Dwarfs written by Robert Jastrow in his high school which in turn encouraged him to decide on a career in science.

Trained in astronomy & physics from University of Iowa, James Hansen received his Bachelor’s degree in mathematics & Physics in 1963 with the highest distinction. He earned his M.S in 1965 in Astronomy and in 1967 he obtained his PhD degree in physics- all 3 were from Iowa University. From 1962-1966, James Hansen was a participant in NASA graduate traineeship program and he was also a visiting student of Kyoto University (Astrophysics Department) and Tokyo University (Astronomy) during the same time. In 1967, he began working for Goddard Institute for Space Studies.

The world-famous scientist is especially renowned for his research in climatology & his provision of testimony regarding climate change in 1988 to the congressional committees. He helped to raise awareness in regards to global warming & also propagates actions or means to mitigate heinous effects of climate change.

On September 27, 2018, Yale’s Program in Russian, East European and Eurasian Studies, and the Poynter Fellowship for Journalism hosted Vladimir Pozner, the acclaimed Russian-American journalist and broadcaster. Pozner spoke on the impact of US foreign policy towards Russia after the Soviet Union has been disbanded, and shared his opinions on a range of issues raised by the audience, from the alleged Russian interference in the 2016 US presidential elections, to Skripal poisoning, to the state of independent media in Russia and the US.

As the novel coronavirus pandemic takes hold in the U.S., some Americans are expressing concerns over how the government is handling the situation, the availability of testing kits and the U.S. response in comparison to that of other countries. Dr. Ashish Jha of the Harvard Global Health Institute joins Judy Woodruff to discuss the “deeply disappointing” U.S. management of the outbreak.

“We Are Way, Way Behind”: U.S. Lags on Coronavirus Testing & Medical Experts Warn “No One Is Immune”

It has been seven weeks since the first case of the new coronavirus was reported in the United States. President Trump is claiming, “Anybody that needs a test gets a test,” but this is simply untrue. There have been just 11,000 tests so far throughout the United States since the coronavirus outbreak began, compared to nearly 20,000 tests for coronavirus every day in South Korea alone. We spend the hour looking at how the Trump administration has failed to account for what may be thousands of infections because of ongoing problems with access to testing, and how other countries have responded. We also discuss measures people must take to limit their exposure and protect their communities. We speak with Justin Lessler, associate professor at the Johns Hopkins Bloomberg School of Public Health. He is the senior author on a new study that suggests the median incubation period for the new coronavirus is about five days. We are also joined by Dr. Steven Goodman, associate dean at Stanford Medical School, where he is professor of epidemiology and population health and medicine. He is also Amy Goodman’s brother. Both schools are now holding classes online over concerns about the outbreak.

France will shut most shops, restaurants and entertainment facilities from midnight on Saturday and people should stay home as much as possible as the spread of coronavirus is accelerating, Prime Minister Edouard Philippe announced. 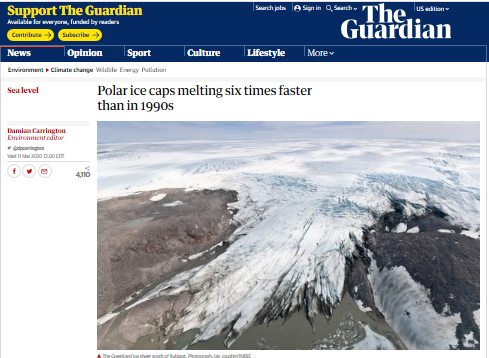 The polar ice caps are melting six times faster than in the 1990s, according to the most complete analysis to date.

The ice loss from Greenland and Antarctica is tracking the worst-case climate warming scenario set out by the Intergovernmental Panel on Climate Change (IPCC), scientists say. Without rapid cuts to carbon emissions the analysis indicates there could be a rise in sea levels that would leave 400 million people exposed to coastal flooding each year by the end of the century.

Rising sea levels are the one of the most damaging long-term impacts of the climate crisis, and the contribution of Greenland and Antarctica is accelerating. The new analysis updates and combines recent studies of the ice masses and predicts that 2019 will prove to have been a record-breaking year when the most recent data is processed.

The previous peak year for Greenland and Antarctic ice melting was 2010, after a natural climate cycle led to a run of very hot summers. But the Arctic heatwave of 2019 means it is nearly certain that more ice was lost last year.

The average annual loss of ice from Greenland and Antarctica in the 2010s was 475bn tonnes – six times greater than the 81bn tonnes a year lost in the 1990s. In total the two ice caps lost 6.4tn tonnes of ice from 1992 to 2017, with melting in Greenland responsible for 60% of that figure.

The IPCC’s most recent mid-range prediction for global sea level rise in 2100 is 53cm. But the new analysis suggests that if current trends continue the oceans will rise by an additional 17cm.

“Every centimetre of sea level rise leads to coastal flooding and coastal erosion, disrupting people’s lives around the planet,” said Prof Andrew Shepherd, of the University of Leeds. He said the extra 17cm would mean the number of exposed to coastal flooding each year rising from 360 million to 400 million. “These are not unlikely events with small impacts,” he said. “They are already under way and will be devastating for coastal communities.”

Erik Ivins, of Nasa’s Jet Propulsion Laboratory, in California, who led the assessment with Shepherd, said the lost ice was a clear sign of global heating. “The satellite measurements provide prima facie, rather irrefutable, evidence,” he said.

Almost all the ice loss from Antarctica and half of that from Greenland arose from warming oceans melting the glaciers that flow from the ice caps. This causes glacial flow to speed up, dumping more icebergs into the ocean. The remainder of Greenland’s ice losses are caused by hotter air temperatures that melt the surface of the ice sheet.

The combined analysis was carried out by a team of 89 scientists from 50 international organisations, who combined the findings of 26 ice surveys. It included data from 11 satellite missions that tracked the ice sheets’ changing volume, speed of flow and mass. 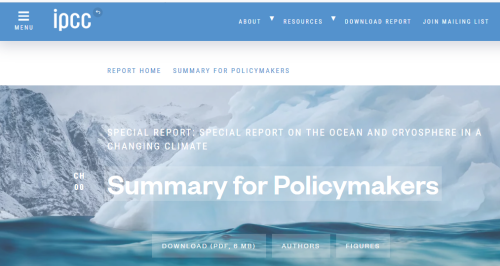 This Special Report on the Ocean and Cryosphere

in a Changing Climate (SROCC) was prepared following an IPCC Panel decision in 2016 to prepare three Special Reports during the Sixth Assessment Cycle. By assessing new scientific literature, the SROCC responds to government and observer organization proposals. The SROCC follows the other two Special Reports on Global Warming of 1.5°C (SR1.5) and on Climate Change and Land (SRCCL)

This Summary for Policymakers (SPM) compiles key findings of the report and is structured in three parts: SPM.A: Observed Changes and Impacts, SPM.B: Projected Changes and Risks, and SPM.C: Implementing Responses to Ocean and Cryosphere Change. To assist navigation of the SPM, icons indicate where content can be found. Confidence in key findings is reported using IPCC calibrated language

U.N. Warns Polar Ice Caps Melting Six Times Faster Than They Were in the 1990s

Top United Nations researchers are warning that polar ice caps are melting six times faster than they were in the 1990s, threatening sea level rise that will displace hundreds of millions of people by the end of the century. The Intergovernmental Panel on Climate Change says ice loss data from Greenland and Antarctica is in line with some of the most pessimistic predictions of climate change, and that even if global carbon emissions were somehow halted today, Arctic ice would continue to melt for another three decades.