The Harvard Global Health Institute is committed to surfacing and addressing broad challenges in public health that affect large populations around the globe. We believe that solutions that will move the dial draw from within and beyond the medicine and public health spheres to encompass design, law, policy, and business. We do that by harnessing the unique breadth of excellence within fields at Harvard and by being a dedicated partner and convener to organizations, governments, scholars, and committed citizens around the globe.

To help deliver this mission, all of HGHI’s work will adhere to 3 strategic principles:

In each of these focus areas, the Harvard Global Health Institute will create and pursue opportunities to convene and connect stakeholders across disciplines, geographies, and sectors.

As the novel coronavirus pandemic takes hold in the U.S., some Americans are expressing concerns over how the government is handling the situation, the availability of testing kits and the U.S. response in comparison to that of other countries. Dr. Ashish Jha of the Harvard Global Health Institute joins Judy Woodruff to discuss the “deeply disappointing” U.S. management of the outbreak.

Chris Field, faculty director at the Woods Institute for the Environment at Stanford University, discusses the challenges of predicting extinction in a rapidly warming world — including how the novel global reactions to Coronavirus and climate are related.

How a new aristocracy’s segregation puts stress on society

Watch more from Making Sen$e: https://bit.ly/2D8w9kc Read more economic news: https://to.pbs.org/2qRyskq Growing class division is destabilizing our society, argues author and philosopher Matthew Stewart in a provocative Atlantic magazine cover story. He says there’s a group in between the top 0.1 percent and bottom 90 percent that plays an important role in running the economy, while setting up barriers that prevent most from realizing the American dream. Economics correspondent Paul Solman reports.

How many more times can the world be twice as big?

What is peak oil, and will fracking buy us time?

PBS NewsHour economics correspondent Paul Solman speaks with former big pharma executive Chris Martenson about why the money the U.S. printed after the financial crash would have been better spent on alternative energy rather than on the banks.

The George H.W. Bush promise that changed the Republican Party

May 4, 2018
Six words that changed conservatism, and American politics.

Presidents give hundreds of speeches, but, for better or worse, Americans tend to remember just a few one-liners. For George Herbert Walker Bush, the 41st US president, that line was his pledge at 1988 Republican National Convention when he accepted the nomination.

The crowd roared in approval, but their cheers were short lived. That’s because when Bush took over the Oval Office, he inherited the consequences of his predecessor Ronald Reagan’s supply-side or “trickle down” economics: massive budget deficits. And in 1990, Bush broke his promise and raised taxes.

Bush was a traditional “country club” Republican, whose relatively moderate economic and social beliefs contrasted with more right wing conservatives that had supported Ronald Reagan. So when he lost to Bill Clinton in 1992, Reaganites abandoned a moderate, bipartisan approach to politics and the Republican Party has moved further to the right ever since.

Do we need ‘stronger leadership’ on coronavirus?

Mar 12, 2020
What are the political ramifications of the COVID-19 coronavirus pandemic? Has the Trump administration’s response been adequate, and how might his handling of the outbreak impact Trump’s chances for reelection? Criminal defense attorney Jan Ronis and conservative commentator and author Raynard Jackon join Scottie Nell Hughes to share their insights.

Mar 10, 2020
Extinction Rebellion: a global activist movement that seeks to see changes in climate policy. “XR” demonstrators have staged spectacular acts of civil disobedience as part of their effort to persuade politicians to take action to reduce global warming.

Extinction Rebellion was founded two years ago, and has achieved remarkable success since then. In Germany alone, there are 120 local XR groups and a total of about 20,000 members.

The small town of Stroud in southwest England is considered the movement’s birthplace. For years, Stroud has been a center of environmental activism in Britain and it is where the founding members live. One of them is Skeena Rathor — a mother of three who says that she’s prepared to go to jail for her beliefs. Another is Gail Bradbrook, who is not above damaging public and private property during protests. Extinction Rebellion activists have paralyzed traffic and chained themselves to fences outside businesses and government offices as part of their demonstrations. One of the co-founders of Extinction Rebellion is Roger Hallam, whose radical activism has sparked controversy. In September 2019, Hallam was arrested and charged with using drones to try to disrupt air traffic at Heathrow Airport. He’s also been accused of making comments that appeared to downplay the significance of the Holocaust which led Extinction Rebellion groups in Germany and Britain to distance themselves from Hallam’s statements.

XR demands that governments declare a climate- and ecological emergency, and take decisive action to protect the environment. The organization continues to recruit new members, and to prepare them for taking part in acts of non-violent civil disobedience. Extinction Rebellion appears to be politically neutral. Its supporters range from the far left to the far right. But this diversity of views could lead to potentially disruptive policy disputes.disruptive policy disputes. 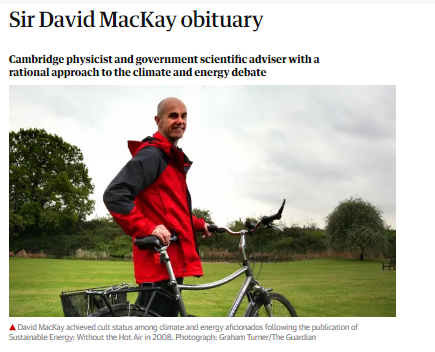 Sir David MacKay, who has died of cancer aged 48, was a true polymath, a rare breed in today’s world, where the frontiers of scientific knowledge are increasingly remote and complex. It is a testament to David’s intellectual brilliance that he was able to contribute to advancing more than one of these frontiers during his short career.

David latterly achieved cult status among climate and energy aficionados following the publication of Sustainable Energy: Without the Hot Air (2008), initially self-published using £10,000 of David’s own money and offered – as were all his works – simultaneously free for download on his website. Described as a “tour de force” by the Economist magazine and lauded by Bill Gates as “one of the best books on energy that has been written”, within two years it had sold 40,000 copies and been downloaded nearly half a million times.

However, although less well-known outside academic circles, David’s achievements in the fields of information theory, machine learning and neural networks were at least as important. Building on theories developed in the 1960s by Robert Gallager, David showed in 1995 that mathematical codes – technically termed low-density parity-check codes – could squeeze immense amounts of data reliably through noisy communication links. LDPC codes are now employed in varied applications such as computer disk drives, mobile phone networks, digital broadcasting and Wi-Fi, ubiquitous but essential components of our modern world.

David’s interest in human-machine interfaces led to his 1999 invention of the user navigates Star Wars-style by zooming through an expanding galaxy of letters. Now available in over 100 languages, Dasher has been downloaded 140,000 times, and has transformed the lives of many people with impaired mobility. One Dasher user with cerebral palsy has even used it to write his master’s thesis.

As a mathematician, David’s expertise on Bayesian probability theory led to his dramatic intervention to help right a notorious miscarriage of justice, when the solicitor Sally Clark was wrongly imprisoned in 1999 after being accused of murdering her two babies. David was horrified that a key witness for the prosecution had misused statistics to tell the court that there was only a 1 in 73m chance that Clark’s babies had died naturally in cot deaths. He recalculated the probability and proved that Clark was far more likely to be innocent than guilty. David got involved in the campaign for her release, which was achieved after a second appeal in January 2003.

His commitment to mathematical accuracy was combined with a refusal to give easy answers. “I don’t want to feed you my own conclusions,” he wrote in the first pages of Without the Hot Air (an early draft of which was tellingly called You Figure It Out!) “Convictions are stronger if they are self-generated, rather than taught.” This continued the style of his earlier academic work. “You can understand a subject only by creating it for yourself,” says the introduction to his landmark textbook Information Theory, Inference and Learning Algorithms (2003).