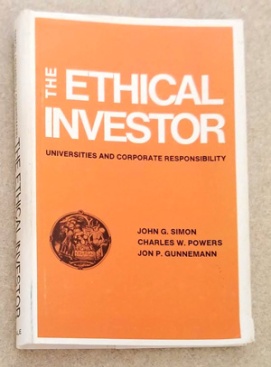 During 1968 and 1969 Yale students and faculty requested that President Kingman Brewster and the Yale Corporation reexamine the university’s investments policies related businesses working with the apartheid regime in South Africa.  At the time, the students met directly with the Yale Corporation and engaged in particular with one of its members — J. Irwin Miller — who, as Chairman of the Cummins Corporation, had maintained historic ties with South African investments.  Previously, Mr. Miller had helped to establish the National Council of Churches (NCC) in the 1950s, and he clearly understood the moral dilemmas facing the Yale Corporation that were made plain by the students’ demands.  As an outcome of these initial engagements with the Yale Corporation, two of the graduate students involved — Jon Gunnemann and Charles Powers — along with several of the faculty organized an explicit course in 1969 to study the problems involved in the ethics of institutional investment.  In 1972 Yale University Press published The Ethical Investor, widely regarded at the time as an important innovation in the realm of assessing institutional financial strategies.

Yale was one of the first institutions to address formally the ethical responsibilities of institutional investors. In 1969 Professors John Simon, James Tobin, William Brainard, and Charles Lindblom along with Yale graduate students Charles Powers and Jon Gunnemann conducted a seminar entitled “Yale’s Investments,” which explored the ethical, economic, and legal implications of institutional investments. Subsequently, Yale became, according to The New York Times, “the first major university to resolve this issue by abandoning the role of passive institutional investor.” Read more about the history of Yale’s ethical investing policy here.

The Yale Corporation Committee on Investor Responsibility (CCIR) considers and makes recommendations to the Corporation on policy matters related to ethical investing. It is supported by the work of the Advisory Committee on Investor Responsibility (ACIR), whose membership consists of Yale alumni, staff, faculty, and students. The Investments Office works with the ACIR and CCIR to implement policies adopted by the Corporation. Learn more about Yale’s ethical investment policies here.

Climate change poses a grave threat to human existence and society must transition to cleaner energy sources. Recognizing that greenhouse gas emissions must be addressed, the Investments Office asks Yale’s Endowment managers to incorporate the costs of carbon emissions in investment decisions, and not to hold companies that refuse to acknowledge the social and financial costs of climate change and that fail to take economically sensible steps to reduce greenhouse gas emissions. Under Yale’s approach, investments with large greenhouse gas footprints are disadvantaged relative to investments with small greenhouse gas footprints, and investment capital flows towards less carbon-intensive businesses and away from more carbon-intensive businesses. Read the Chief Investment Officer’s latest update on climate change here.

The Yale Corporation has adopted a policy prohibiting investment in assault weapon retailers. Specifically, Yale will not invest in any retail outlets that market and sell assault weapons to the general public. Read the full statement here.

The growth of the private prison industry and concerns about prisoner wellbeing have sparked debate about whether private prisons ultimately serve the public good. Critics contend that prisoner welfare and profit generation are fundamentally misaligned goals, making it impossible to operate a private prison ethically. While the ACIR shares many of their concerns, the committee concluded that divestment is not warranted under the University’s ethical investing guidelines. The ACIR recommended that, instead, if Yale were to hold securities of private prison companies, the University should support appropriate, reasonable, and well-constructed shareholder resolutions related to the improvement of operations of private prisons and the disclosure of political contributions and lobbying activities. Read more here.

After decades of depressed economic activity and unsuccessful policy initiatives, Puerto Rico’s debt levels rose to unsustainable levels, leading the Commonwealth to default on July 1, 2016. In September 2017 – while Puerto Rico was in the midst of restructuring its finances – Hurricane Maria caused widespread destruction and plunged the island into a severe humanitarian and economic crisis. As Puerto Rico’s plight grew, a coalition of activists directed their energy towards Puerto Rico’s creditors – in particular, hedge fund managers – calling on them to divest or forgive holdings of Puerto Rican debt. When campus groups at Yale, as well as other state and local organizations, demanded that the University disclose all investments in Puerto Rican bonds, cancel all those held by Yale, and fire investment managers who refuse to sell or forgive the debt, the matter was referred to the ACIR. The ACIR concluded in January 2018 that divestment from Puerto Rican debt is not warranted when an investor is abiding by the applicable legal framework in a process in which the debtor’s interests are appropriately represented. Read more here.

Investments in wind can provide substantial economic returns to the University, while helping achieve sustainability goals. Beginning in 2007, Yale’s managers, in conjunction with local wind power development firms, identified several sites with attractive capacity factors. The University’s partners initiated development on a handful of sites. One site in particular, Record Hill Wind, is fully operational and was transferred from the Endowment to the University, and its management is now overseen by the Yale Office of Facilities.