A pathway overlooks the rising waters in Boston’s Seaport neighborhood. (Adam Glanzman for The Washington Post)
By Steven Mufson
FEBRUARY 19, 2020

BOSTON — Famous for its role in America’s war for independence, this city is now fighting the rising seas.

Boston is raising streets, building berms and even requiring that new high-rise condominium developments on its harbor acquire “aqua fences” — portable metal barriers that can be dragged to the street and anchored to the pavement to deflect incoming waves.

Mayor Martin J. Walsh (D) has vowed to spend more than $30 million a year, equal to 10 percent of Boston’s five-year capital budget, to defend the city from a watery future that is expected because of climate change.

“People talk about a managed retreat” for waterfront cities, said Boston’s chief of environment, energy and open space, Christopher Cook, as he looked out on the city skyline from a popular waterside park across the harbor. “Where do we retreat to?”

Although Florida, Louisiana and the Carolinas are frequently associated with flooding, Boston was ranked the world’s eighth most vulnerable to floods among 136 coastal cities by a 2013 study produced by the Organization for Economic Cooperation and Development.

The sea that surrounds Boston crept up nine inches in the 20th century and is advancing ever faster toward the heart of the city.

And as climate change accelerates, the pace of sea-level rise in Boston is expected to triple, adding eight inches over 2000 levels by 2030, according to a report commissioned by the city. The ocean might climb as much as three feet above 2013 levels by 2070, the report said. 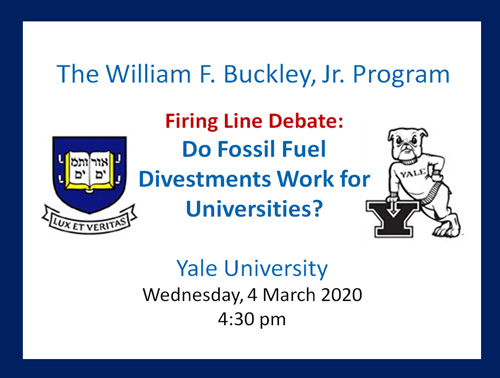 Historically related material includes documentation from as far back as 1965 when concerned students and faculty began to raise questions of socially responsible investment practices of American universities in reference to the morality of the Vietnam war and tacit support of apartheid in South Africa.

and debates broadcast nation-wide in 1968 relating to the Vietnam war:

The question of university investments and the student demand for “divestment” from certain companies, industries or broad areas of reprehensible financial investment stemmed from a growing realization by college-aged students about what the role of the universities had come to play in the “cold-war” years after World War II.  Students — many of whom faced the certain conscription into the military to fight in the Vietnam war if they interrupted their college education —  were confronting the basic question:  “what was their university education supposed to accomplish, anyway?”   The answers were disturbing.

Larger questions of how their education was being financed in the first place soon followed the specific issues of South African apartheid or the morality of the Vietnam war.  In more recent years, — since the 1980s — as it has become apparent that corporate investments in certain realms and practices have systematically destroyed their future livelihoods or even their chance of survival, students have begun to mobilize around a whole range of “divestment-investment” questions at the core of university endowment policies and practices.  Beyond selected corporations or specific industry practices the faulty logic of continuous growth on a finite planet has come under scrutiny as students have learned to focus on sustainability and survival in an abruptly changing ecosystem. 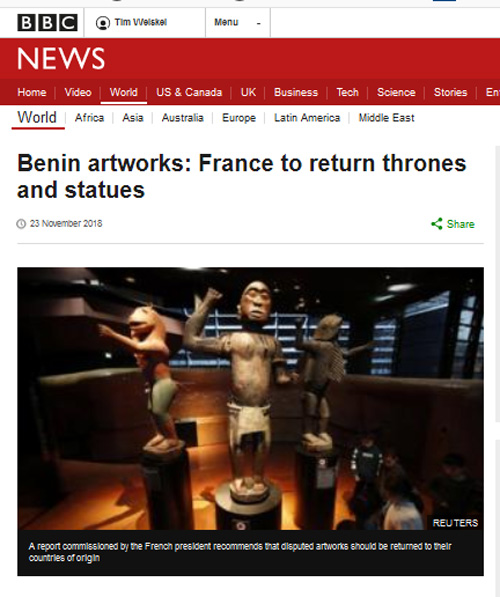 French President Emmanuel Macron has said that France will return 26 artworks taken from the west African state of Benin in the colonial era.

His announcement follows an experts’ report recommending that African treasures in French museums be returned to their countries of origin.

The 26 thrones and statues were taken in 1892 during a colonial war against the then Kingdom of Dahomey.

They are currently on display in the Quai Branly museum in Paris.

Benin officially asked for their return some years ago. President Macron said the statues would be returned “without delay”.

His office said the return of art to Benin should not be an isolated case.

The president “hopes that all possible circulation of these works is considered: returns but also exhibitions, loans, further cooperation”, the Elysee palace said.

A panel of experts, commissioned by the president to study the issue of African artworks in French museums, presented their findings to him on Friday.

Ousmane Aledji, director of the Benin cultural centre Artisttik Africa, told the AFP news agency he was pleased to see “a new form of cultural exchange” with France.

During colonial rule in Africa, thousands of cultural artefacts were seized from the continent by Western countries.

The official report states that most of the Africa collection in the Quai Branly museum – approximately 46,000 pieces – was acquired with some degree of duress.

France’s announcement comes as major museums across Europe have agreed to lend key artefacts back to Nigeria.

France sets deadline to return 26 objects to Benin by 2021 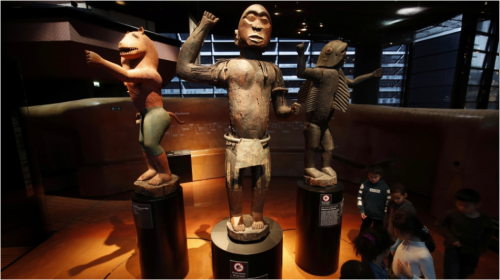 When French soldiers began an incursion against the West African Kingdom of Dahomey in 1890, King Béhanzin sent his fiercest soldiers to defend the front line.

The troops were an elite squadron of women warriors often remembered as “Amazons.”

The French eventually defeated the kingdom, looting expensive jewelry and clothes that belonged to the women warriors. These precious objects speak to the warriors’ importance to the Kingdom of Dahomey that once ruled parts of modern-day Benin. The French colonized Benin until 1959.

In December 2019, France announced a deadline to return 26 objects taken by French colonial military leader Alfred-Amédée Doddsin the 1890s back to Benin by 2021 amid a growing call for the restitution of African art taken during colonial periods.

Early Modern Memes & Other Themes in Pastime with Good Company

Eve Houghton, curatorial assistant at the Beinecke Library and graduate student in the Department of English, Yale University, discusses the exhibit “Pastime with Good Company: Writing and Leisure in Early Modern England,” on view through April 19, 2020, as part of the overall exhibition, “Subscribed: The Manuscript in Britain, 1500-1800.”

The PointCOVID 19 What’s the impact on the global economy?