SPECIAL: Dr. Martin Luther King Jr. in His Own Words

Today is the federal holiday that honors Dr. Martin Luther King Jr. He was born January 15, 1929. He was assassinated April 4, 1968, at the Lorraine Motel in Memphis, Tennessee. He was just 39 years old. While Dr. King is primarily remembered as a civil rights leader, he also championed the cause of the poor and organized the Poor People’s Campaign to address issues of economic justice. Dr. King was also a fierce critic of U.S. foreign policy and the Vietnam War. We play his “Beyond Vietnam” speech, which he delivered at New York City’s Riverside Church on April 4, 1967, as well as his last speech, “I’ve Been to the Mountaintop,” that he gave on April 3, 1968, the night before he was assassinated.

[ Fifty years after the assassination of The Reverend Dr. Martin Luther King, Jr. many Americans who remembered the events of 1967 and 1968 — during their “Junior and Senior Years” of college — recalled their vivid and indelible memories amidst their 50th class reunions activities. ]

Few members of the Class of 1968 who heard The Reverend Martin Luther King, Jr. in their senior year could ignore then or forget ever since the statement that he delivered in the Spring of their Junior Year on 4 April 1967 — exactly one year before he was assassinated on 4 April 1968.

It is perhaps for this reason that some the Class of 1968 are especially mindful that this year of 2018 also marks an important anniversary of another illegal and massively destructive war.  It is the 15th anniversary of President George W. Bush’s declaration of “victory” in Iraq.  On May 31 2003, members of Yale ’68 heard the speech by the Reverend William Sloane Coffin, Jr. (see below) when they returned from Washington, D. C. where classmate, George W. Bush, had held a special reception at the White House to begin their Reunion festivities.

At the time President Bush had recently returned from the deck of the aircraft carrier, Abraham Lincoln, where on 1 May 2003 he had celebrated “mission accomplished” as he announced that “…In the battle of Iraq, the United States and our allies have prevailed.” These memories are perhaps more vivid than even those of the Vietnam war,

As it happens, as well, the year 2018 marks the one hundredth anniversary of the end of World War I, the war in which America began to intervene in the affairs of Europe and the crumbling vestiges of the Ottoman Empire in the Middle East. The British writer and great bard of Empire, Rudyard Kipling, reflected on conflicts such as that one in a sad poem entitled: “Gentlemen-Rankers”

The poem stands as a haunting portrait of once prominent figures in a world that had been destroyed by the world’s first global conflict.

Several generations later Yale’s “Gentleman Songsters” out on a spree repeated nearly word-for-word the phrases of Kipling’s “Gentlemen Rankers” — probably not fully realizing their sad refrain took up  the rhymes and rhythms of a declining empire.

At the 35th Reunion of the Yale Class of 1968, shortly after the Whiffenpoofs once again sang the refrain from their signature song,  The Reverend William Sloane Coffin, Jr. delivered a public  address on the occasion of being honored as “The Permanent Chaplain” of the Class of 1968.  [Excerpt from “Splendor and Wisdom” – a film by Lloyd Kaufman & Michael Herz – a Trauma Team Release]

Given these tumultuous events and anniversaries, we might well ask, therefore, fifteen years after The Reverend Coffin’s address and fifty years after they graduated from Yale what ever happened to the “Class of 1968?” The answer is as varied and complex as the members of the class itself, glimpses of which will, no doubt, appear in the Class Book soon to be published as part of the 50th Reunion festivities. 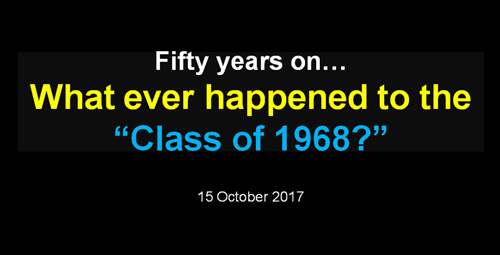