Visit http://TED.com to get our entire library of TED Talks, transcripts, translations, personalized Talk recommendations and more. Fake news can sway elections, tank economies and sow discord in everyday life. Data scientist Sinan Aral demystifies how and why it spreads so quickly — citing one of the largest studies on misinformation — and identifies five strategies to help us unweave the tangled web between true and false.

As the US Senate formally opened the impeachment trial on whether to remove Donald Trump from office, a nonpartisan congressional watchdog on Thursday dealt the Republican president a blow by concluding that the White House violated the law by withholding security aid approved for Ukraine by US lawmakers 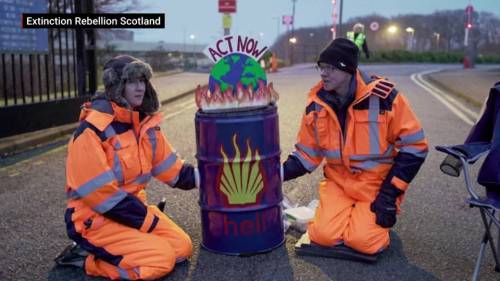 In London, England, climate activists with the group Extinction Rebellion held a “die-in” protest outside the corporate offices of Siemens, calling out the German company over its support for the Adani coal mine in Queensland, Australia — a major source of greenhouse gas emissions. Meanwhile, Extinction Rebellion activists in Aberdeen, Scotland, locked themselves together in a human chain to block the offices of Shell Oil Company, holding signs that read “Tell the Truth” and “Fossil Fuels Equal Extinction.”

2019 Was the Second-Hottest Year on Record, Capping the Warmest-Ever Decade

The 2010s were the hottest decade ever recorded, as atmospheric carbon dioxide levels soared to record levels. That’s according to a new report based on data from NASA, NOAA and other agencies, which found global surface temperatures surged by more than 1 degree Celsius — or about 1.8 degrees Fahrenheit — above pre-industrial levels. 2019 was the planet’s second-hottest year on record, surpassed only by 2016. This is climate scientist Omar Baddour of the World Meteorological Association.

Youth marches for climate action draw millions around the world

In cities across the globe on Friday, protesters took to the streets to demand action on climate change. The demonstrations, easily the largest to focus on climate, represent a movement driven largely by young people

CBS4’s Tom Hanson shares the details of the report from NASA and the National Oceanic And Atmospheric Administration.

2019, the second hottest year on record I AFP

The year 2019 was the second hottest ever recorded and a virtual tie with 2016, the warmest El Nino year, the European Union’s climate monitor says in its round up of the hottest decade in history. Data released by the Copernicus Climate Change Service (C3S) showed that worldwide temperatures were just 0.04 degrees Celsius lower than 2016, when temperatures were boosted 0.12 degrees Celsius by a once-in-a-century El Nino natural weather event.

The decade that just ended was by far the hottest ever measured on Earth, capped off by the second-warmest year on record, two U.S. agencies reported Wednesday. (Jan. 15)

The Iranian Foreign Minister Mohammad Javad Zarif talks about US involvement in the Middle East at conference in New Delhi.