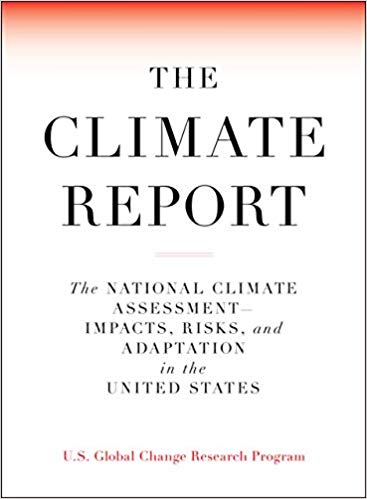 To hide its dramatic findings, the government released its mandated Climate Assessment Report on Black Friday while everyone was out shopping. Melville House is rushing the report into print – including all its charts, graphs, and illustrations – to broadcast its meticulous and devastating findings about the causes and impact of global warming.

The U.S. Global Change Research Program (USGCRP) is mandated by law “at least every four years … to submit to the President and the Congress an assessment regarding the findings of … the effects of global change, and current and major long-term trends in global change.” This year, the report was released in the wake of a series of some of the most devastating hurricanes in American history, as well as the horrific California wildfires. As the report says, “The assumption that current and future climate conditions will resemble the recent past is no longer valid.”

Detailing not only the devastating impact of global warming on the environment, but health issues leading to tens of thousands of deaths per year, and economic losses of tens of billions of dollars, the report concludes that “The evidence of human-caused climate change is overwhelming and continues to strengthen, that the impacts of climate change are intensifying across the country, and that climate-related threats … are rising.”

Ballerinas in white tutus danced scenes from Swan Lake on the forecourt of the Palais Garnier in Paris on Tuesday to protest against French President Emmanuel Macron’s plans to scrap their special pension benefits.

You never miss the water till the well runs dry… Luckily that problem is being solved in China, thanks to the mega water diversion project that has directly benefited over 120 million people

In special broadcast, we spend the hour remembering Toni Morrison, one of the nation’s most influential writers, who died in August at the age of 88 from complications of pneumonia.  In 1993, Toni Morrison became the first African-American woman to receive the Nobel Prize for Literature. She also won a Pulitzer Prize in 1988 for her classic work Beloved. Toni Morrison was born in Lorain, Ohio, in 1931. She did not publish her first novel, “The Bluest Eye”, until she was 39 years old. She wrote it while taking care of her two young sons as a single mother and juggling a day job as a book editor at Random House. As an editor, she is widely credited with helping widen the literary stage for African Americans and feminists. Much of Morrison’s writing focused on the female black experience in America. Her work was deeply concerned with race and history, especially the sin of transatlantic slavery and the potentially restorative power of community. In 2012, President Obama awarded Morrison the Presidential Medal of Freedom. Upon her death, he said, “Toni Morrison was a national treasure. Her writing was not just beautiful but meaningful — a challenge to our conscience and a call to greater empathy.” Today we remember Toni Morrison through those who knew and loved her – editors, writers, musicians – with highlights from a celebration of her life on November 21 at Cathedral of St. John the Divine in New York. We hear from Oprah Winfrey, Edwidge Dandicat, Angela Davis, Fran Lebowitz, Ta-Nehisi Coates, Kevin Young, and David Remnick.

What is the ‘deep state’ that Trump keeps talking about? | The Bottom Line

Dec 18, 2019
The term “deep state” usually conjures a secretive illuminati that is the real power behind the curtains – made up of spies, criminals, military leaders and businessmen.

In the world of US President Donald Trump, it has come to mean the civil servants who have been working for the government for years.

They are “holdovers” from previous administrations, and they are blocking his agenda and policy reversals. At least, that’s the mantra that he repeats in his campaign rallies nationwide.

But is Trump using this construct as a punching bag to paint himself as an underdog who is fighting the powers that be?

“Deep state” has become a permanent fixture of the culture wars in the United States, and Trump is using it to energise his base.

So what is the reality of the “deep state” in US politics? Join Steve Clemons as he hosts a discussion on the ramifications of the constant presidential rants against government bureaucrats and diplomats.

Why Are Republicans So Afraid Of Lev Parnas? | Velshi & Ruhle | MSNBC

One of the key players in the Ukrainian scandal is due in court today, where he could have his bail revoked. But why are Republicans so afraid of him? Real Clear Politics Associate Editor A.B. Stoddard joins Stephanie Ruhle with the answer. Aired on 12/17/19.

How do India’s global commitments and domestic policies towards mitigating the climate crisis fare? D Raghunandan of the All India Peoples’ Science Network (AIPSN) discusses the inequity and inadequacy of the Paris Agreement to tackle the global climate crisis. He also addresses the climate challenges facing India, and the urgency of building resilience. The video underlines the need for dialogue amongst civil society and peoples movements in the north and south to build a common understanding for a just and equitable solution to the climate crisis.

Jolly: ‘Damning Condemnation’ That Trump Thinks He Can Control The Senate | The 11th Hour | MSNBC

Fmr. Republican Congressman David Jolly reacts to Senate Republicans saying, before a Senate impeachment trial, that they will remain loyal to Trump. Aired on 12/17/19.

Rick Wilson is among a group of Republicans who are launching a political effort to defeat the president and his allies during the 2020 election. He joins to discuss it. Aired on 12/17/19.

Dec 25, 2019
With a national strike In France against pension reforms in its third week, people there are facing another crackdown: a bruising tax hike on the most-polluting vehicles to meet tough EU targets.