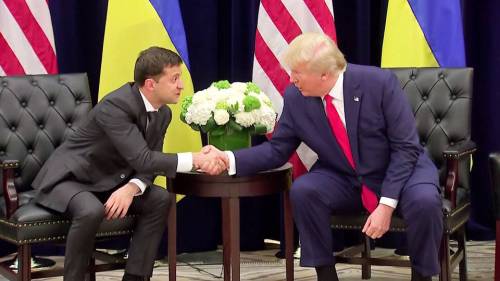 The Pentagon has released new emails revealing how the White House budget office ordered the Pentagon to halt all military aid to Ukraine only 91 minutes after President Trump’s July 25 telephone call with Ukrainian President Volodymyr Zelensky. The heavily redacted emails show senior budget official Michael Duffey telling Pentagon officials Trump had become personally interested in aid and had ordered the hold. The emails were released after the Center for Public Integrity filed a Freedom of Information Act request. Over the weekend, Democratic lawmakers renewed demands for witnesses, including Michael Duffey, to testify at Trump’s Senate impeachment trial. This is Senate Minority Leader Chuck Schumer.

Sen. Chuck Schumer: “If there was ever an argument that we need Mr. Duffey to come testify, this is that information. This email is explosive. A top administration official, one that we requested, is saying, ‘Stop the aid,’ 91 minutes after Trump called Zelensky, and said, ‘Keep it hush-hush.’ What more do you need to request a witness?”