Published on Nov 30, 2019
In Germany, an ancient forest has become a symbol of the climate movement.

Environmentalists are at odds with a German coal company, which is trying to clear the land. But, with nearly 40 percent of the nation’s electricity coming from coal, it will take years to phase it out as a source of energy. CGTN’s Guy Henderson reports.

Published on Nov 30, 2019
Friday For Future protesters took on the Black Friday theme in Frankurt, Friday, November 29, demonstrating in the main shopping precinct and trying to block access to departments stores. Youths carrying banners reading “There is no planet B” protested in front of some of Germany’s biggest chain stores as shoppers walked past, carrying televisions and bags full of goods they had bought in the Black Friday sales. (Reuters)

Published on Nov 28, 2017
Controversy surrounding Trump’s business empire grows. Former White House Ethics Chief Richard Painter on Trump’s financial secrecy and conflicts of interest. Hotels in Panama, and Toronto are ditching the Trump name. Painter says Congress needs to “get off their behind” and find out where Trump’s financial interests lie.

Published on Nov 25, 2019
After defying subpoenas to testify before Congress, a federal judge has decided former White House Counsel Don McGahn must testify before Congress. Former Acting U.S. Solicitor General Neal Katyal argues the highly anticipated ruling is a “a complete win for Nancy Pelosi and the House of Representatives, and a very devastating loss for the President.” Aired on 11/25/19.

Published on Nov 30, 2019
After the traditional Thanksgiving feast, many Americans might feel a need to go exercise and burn off the extra weight: millions of shoppers across the world queued up for hours to get the best deals during the retail fest known as Black Friday. But despite being billed as a bargain extravaganza, the event has a dirty secret.

Published on Nov 30, 2019
Protesters blocked roads in Malta on Friday to demand Muscat’s resignation, holding placards reading “assassins” and “blood is on your hands”.…

Published on Nov 30, 2019
One of Malta’s wealthiest men, Yorgen Fenech, was charged in a Valletta court on Saturday with complicity to murder in the car bomb killing of anti-corruption journalist Daphne Caruana Galizia in 2017.

The Tea Party and the Remaking of Republican Conservatism: Theda Skocpol, Vanessa Williamson 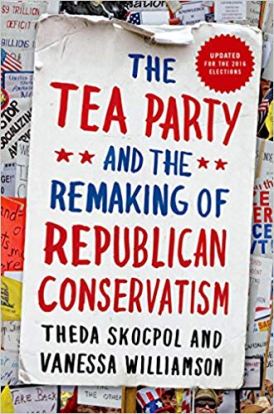 On February 19, 2009, CNBC commentator Rick Santelli delivered a dramatic rant against Obama administration programs to shore up the plunging housing market. Invoking the Founding Fathers and ridiculing “losers” who could not pay their mortgages, Santelli called for “Tea Party” protests. Over the next two years, conservative activists took to the streets and airways, built hundreds of local Tea Party groups, and weighed in with votes and money to help right-wing Republicans win electoral victories in 2010.

In this penetrating new study, Harvard University’s Theda Skocpol and Vanessa Williamson go beyond images of protesters in Colonial costumes to provide a nuanced portrait of the Tea Party. What they find is sometimes surprising. Drawing on grassroots interviews and visits to local meetings in several regions, they find that older, middle-class Tea Partiers mostly approve of Social Security, Medicare, and generous benefits for military veterans. Their opposition to “big government” entails reluctance to pay taxes to help people viewed as undeserving “freeloaders” – including immigrants, lower income earners, and the young. At the national level, Tea Party elites and funders leverage grassroots energy to further longstanding goals such as tax cuts for the wealthy, deregulation of business, and privatization of the very same Social Security and Medicare programs on which many grassroots Tea Partiers depend. Elites and grassroots are nevertheless united in hatred of Barack Obama and determination to push the Republican Party sharply to the right.

The Tea Party and the Remaking of Republican Conservatism combines fine-grained portraits of local Tea Party members and chapters with an overarching analysis of the movement’s rise, impact, and likely fate.

Young People Gravitate To Socialism As Capitalism Keeps Failing Them

According to a new round of Gallup polling, Socialism is now as popular among Millennial voters as Capitalism. The main reason for this, which the poll did not get into, is that this age group has seen nothing but failures from capitalism for most of their lives, and they want a better system. Capitalism, in its current form, is not working for any age group, but older voters are still able to look back fondly at what once was. Ring of Fire’s Farron Cousins explains what’s happening.

From melting ice caps to dying forests and thawing permafrost, the risk of ‘abrupt and irreversible changes’ is much higher than thought just a few years ago.

“What we’re talking about is a point of no return, when we might actually lose control of this system,” said Will Steffen, a coauthor of a paper released ahead of the annual UN climate summit. Credit: Ian Joughin/University of Washington APL Polar Science Center

Humans are playing Russian roulette with Earth’s climate by ignoring the growing risk of tipping points that, if passed, could jolt the climate system into “a new, less habitable ‘hothouse’ climate state,” scientists are warning ahead of the annual UN climate summit.

Research now shows that there is a higher risk that “abrupt and irreversible changes” to the climate system could be triggered at smaller global temperature increases than thought just a few years ago. There are also indictations that exceeding tipping points in one system, such as the loss of Arctic sea ice, can increase the risk of crossing tipping points in others, a group of top scientists wrote Wednesday in the scientific journal Nature.

“What we’re talking about is a point of no return, when we might actually lose control of this system, and there is a significant risk that we’re going to do this,” said Will Steffen, a climate researcher with the Australian National University and co-author of thecommentary. “It’s not going to be the same conditions with just a bit more heat or a bit more rainfall. It’s a cascading process that gets out of control.”