Published on Nov 27, 2019
Twenty years ago this week, tens of thousands of activists gathered in Seattle to shut down a ministerial meeting of the World Trade Organization. Grassroots organizers successfully blocked world leaders, government trade ministers and corporate executives from meeting to sign a global trade deal that many called deeply undemocratic, harmful to workers’ rights, the environment and Indigenous people globally. On November 30, 1999, activists formed a human chain around the Seattle convention center and shut down the city’s downtown. Police responded by firing tear gas and rubber bullets into the mostly peaceful crowd. The protests went on for five days and resulted in 600 arrests and in the eventual collapse of the talks, as well as the resignation of Seattle’s police chief. The protests were documented in the film “This is What Democracy Looks Like.” Democracy Now! was in the streets of Seattle 20 years ago. During one live broadcast we spoke to two leading critics of the WTO: Indian physicist and activist Vandana Shiva and Lori Wallach of Public Citizen, who join us on the show today.

Published on Nov 29, 2019
Five years ago, a report was released on the torture tactics used against suspects of the 9/11 terrorist attacks. Now, that investigation is the subject of a new film, “The Report.” Jeffrey Brown speaks with director Scott Z. Burns about why he thought the controversial topic could be made into a movie.

Game-changer: Millennials in the era of digitalization

Published on Nov 29, 2019
Millennials are a special generation, not only for being born at the connection of two centuries but also growing up along with the boom of new technology and digitalization. Life is proceeding in an unprecedented way now — faster, closer and in some ways easier than ever before. While embracing the great conveniences brought by modern technology, we may want to take a break and reconsider how technology has changed or even reshaped our life in recent decades. What does new-tech mean for us, evolution, subversion or destruction? 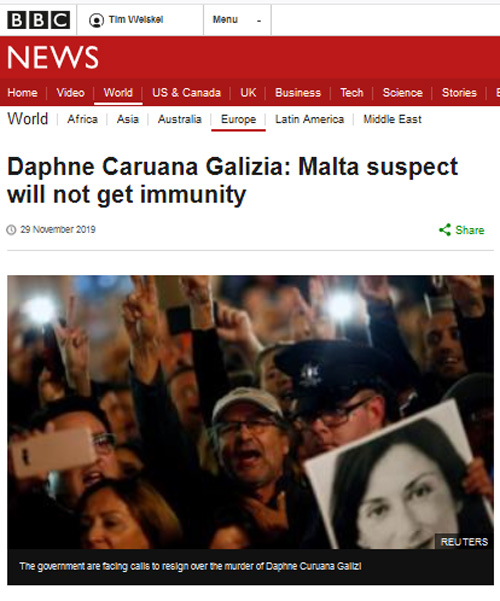 Malta’s Prime Minister Joseph Muscat has said a suspect in the murder of journalist Daphne Caruana Galizia will not be granted immunity to reveal what he knows about the case.

Businessman Yorgen Fenech had requested a presidential pardon in exchange for information.

Caruana Galizia, a prominent anti-corruption blogger, was killed by a car bomb in 2017.

Mr Muscat is under increasing pressure to resign over the case.

The prime minister has previously said he will only step down when those who ordered the killing are identified.

However, the Times of Malta reported on Friday that Mr Muscat was preparing to announce his resignation “immediately” amid the worsening political crisis.

Mr Muscat’s Labour Party has cancelled an event on Sunday at which the prime minister was due to speak.

Last week Mr Fenech was arrested in a dramatic raid on his yacht. He received hospital treatment after his arrest and has been given police bail.

Mr Fenech was identified last year as being the owner of a mysterious Dubai-registered company, 17 Black, listed in the Panama Papers – a massive leak of documents from an offshore law firm in 2016.

Caruana Galizia wrote about 17 Black eight months before her death, alleging it had links to senior government figures.

What did the cabinet decide overnight?

The prime minister said it was the most appropriate course as Mr Fenech had made allegations against the PM’s former chief of staff, Keith Schembri – who resigned last week and was arrested on Tuesday.

“I left the final decision with my colleagues, who decided that it’s not fitting to grant a pardon,” Mr Muscat announced at a press conference, flanked by ministers.

He stressed that his cabinet had followed the advice of the chief of police and the attorney general.

Police confirmed on Thursday that Mr Schembri had been released and was no longer of interest to investigators.

Arundhati Roy: It’s Hard to Communicate the Scale and the Shape of This Shadow Taking India Over

Human rights groups are condemning the Indian government for carrying out widespread torture, extrajudicial killings, arbitrary arrests and other crimes in Kashmir after the region’s special status was revoked in August. We speak to the acclaimed Indian author Arundhati Roy about the crackdown in Kashmir, rising authoritarianism in India and other issues.

The Rise of Chinese Private Sector Investment in Africa

Chinese investors have been wary of the African market. For a long time, China’s cash-rich venture capital, private equity, and corporate investors have preferred the stability in the U.S. or the cultural familiarity in Southeast Asia’s markets. Africa, in their view, just didn’t have the profile they were looking for as an investment destination. Many felt the risk was just too high in fragmented markets where consumers lacked sufficient wealth to generate the kind of returns their portfolios demand.

Well, that’s no longer the case.

Now that Chinese money is increasingly viewed as “toxic” in the United States and Africa’s consumer markets are beginning to mature, Chinese investors are increasingly getting over the fears they once had about engaging the African market.

Chinese private sector investment in Africa surged this year with hundreds of millions of dollars flowing into a variety of sectors across the continent:

Apparel: manufacturers are fleeing China’s rising labor costs to set up new factories in places like Rwanda and Ethiopia.
Electronics: little known Chinese OEMs are setting up small factories in places like Uganda to be able to cut shipping costs and take advantage of Africa’s preferential trade agreements with EU and US markets.
Mobile tech: Giants like Shenzhen-based Transsion Holdings are rapidly expanding into new markets beyond hardware including music and fintech among others.
Fintech: Without a doubt, the rush of Chinese investment into Africa’s (largely in Nigeria) fast-growing mobile payments space is the story of the year. So far, they’ve committed around a quarter-billion dollars with more expected.

The list goes on and on… from Huawei in the telecom sector to Beijing-based African pay-TV giant StarTimes that’s now making sizable investments in original content production and programming. And these are just the big names who get most of the attention. There are countless other small-to-medium-sized Chinese businesses active in every country across the continent doing everything from running factories that serve local markets to resource extraction.

But in order for Chinese investors, particularly those with large portfolios, to successfully to do deals in Africa, they need help, middlemen who can guide them through these very complex markets. So more banks in Africa are hiring people like Kai Zhu to be those guides. Kai is the China-Africa Corridor Deal Team Leader at Absa Group, the Johannesburg-based financial services company that is also Africa’s third-largest bank.

Kai joins Eric & Cobus to talk about what’s behind China’s increased investor interest in Africa and where he sees the trend going in 2020.

Inside the Steele Dossier & The Fusion GPS Investigation Of Trump : NPR 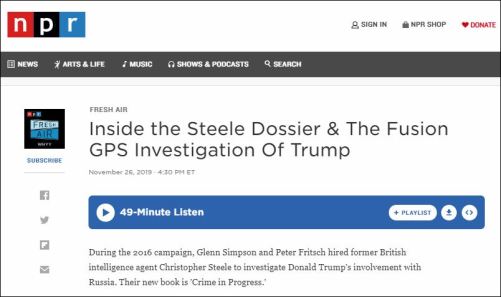 Climate Central CEO and Chief Scientist Ben Strauss says the “problem is too big for any one entity to do on its own”. Aired on 11/28/19.

Lakota historian Nick Estes talks about Thanksgiving and his book “Our History Is the Future.” He is a co-founder of the indigenous resistance group The Red Nation and a citizen of the Lower Brule Sioux Tribe.

Published on Nov 28, 2019
President Trump spent part of this Thanksgiving in Afghanistan, making a surprise visit to Bagram Airfield north of Kabul, where he shared a traditional holiday dinner with U.S. troops and met with Afghan President Ashraf Ghani. Trump also said he restarted peace talks with the Taliban, which he had previously cut off in early September. John Yang joins Amna Nawaz to discuss that unexpected news.