Twenty years ago this week, tens of thousands of activists gathered in Seattle to shut down a ministerial meeting of the World Trade Organization. Grassroots organizers successfully blocked world leaders, government trade ministers and corporate executives from meeting to sign a global trade deal that many called deeply undemocratic, harmful to workers’ rights, the environment and Indigenous people globally. On November 30, 1999, activists formed a human chain around the Seattle convention center and shut down the city’s downtown. Police responded by firing tear gas and rubber bullets into the mostly peaceful crowd. The protests went on for five days and resulted in 600 arrests and in the eventual collapse of the talks, as well as the resignation of Seattle’s police chief. The protests were documented in the film “This is What Democracy Looks Like.” Democracy Now! was in the streets of Seattle 20 years ago. During one live broadcast we spoke to two leading critics of the WTO: Indian physicist and activist Vandana Shiva and Lori Wallach of Public Citizen, who join us on the show today. 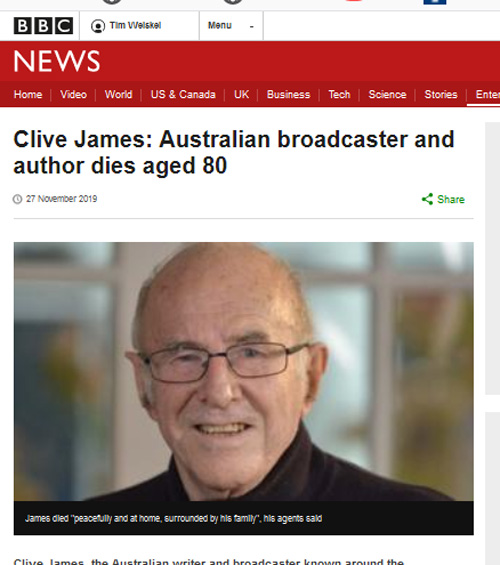 Clive James, the Australian writer and broadcaster known around the world for his dry wit, has died at the age of 80.

Diagnosed with leukaemia in 2010, the author and critic had movingly written about his terminal illness during the final years of his life.

Born Vivian James in 1939, he moved to England in 1961 and rose to prominence as a literary critic and TV columnist.

He went on to deliver wry commentary on international programming in such shows as Clive James On Television.

The show saw him introduce amusing and off-beat TV clips from around the world, most famously from Japanese game show Endurance.

According to a statement from his agents, he died at home in Cambridge on Sunday. A private funeral was held on Wednesday in the chapel at Pembroke College.

“Clive died almost 10 years after his first terminal diagnosis, and one month after he laid down his pen for the last time,” the statement read.

Excerpts from Clive James’ reading of “The River in the Sky” [links added]:

In ancient days
Men in my job prepared for endless travel
Across the sea of stars, where Pharaoh sailed
To immortality, but now we know
This is no journey. A long, aching pause
Is all the voyage there will ever be.

…… Books are the anchors
Left by the ships that rot away. The mud
The anchors lie in is one’s recollection
Of what life was, and never, late or soon,
Will be again.

Plugged into YouTube’s vast cosmopolis,
We are in Sweden, and Bill Evans plays
“ ’Round Midnight,” Monk’s most elemental thing:
Most beautiful and most bewildering
Because it builds a framework out of freedom.
At the Cambridge Union once, I watched Monk play
That song in his sharp hat and limp goatee
As if the fact that he himself composed it
Back in the day
Merely insured he would forget it slowly,
Instead of straightaway, like where he was.
His eyeballs like hot coals, he jabbed and growled,
At one stage failing to locate the keyboard
Completely. But I walked to the Blue Boar
Beside Tom Weiskel to pay awestruck homage.
Monk thought we were the cops. He disappeared.
Only a few years later, Weiskel, too,
Went missing. Back in the States, majestic
In his tenure, he was skating with his daughter
On a frozen lake. She went through the thin ice
And he died diving for her. So now I
Am the only one of those three men alive.
Let’s call it four. George Russell loved that number.
He heard the sparseness in the classic tones,
Though his idea of swing was Hindemith.

The skis were long in those days
And Mike Smith’s, made of steel,
Would clatter on the moguls
Of Zurs am Alberg

As he straight-lined a whole hill.
None of them liked the war
But you couldn’t see them losing

Back teaching in the States,
Weiskel, to save his daughter,
Didn’t stop to take his skates off
Before he went in to find her
And they both died in the cold

He’d understand, if ever I should see him
In the halls of Dis,
I just about put up with the idea
Of his death, but not hers.
But he won’t need telling that,
Today, in this long winter ….

[excerpted from Clive James latest book: “The River in the Sky.”]

“Don’t Hate the Media, Be the Media”: Reflections on 20 Years of Indy media, a Radical Media Movement | Democracy Now! 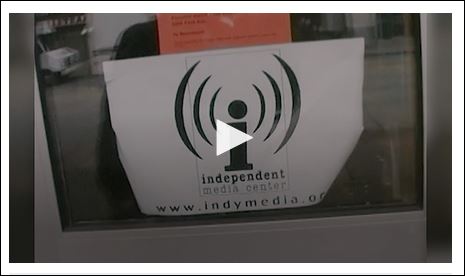 This week marks the 20th anniversary of the historic protests in Seattle that shut down a meeting of the World Trade Organization, but it also marks the time when the first Independent Media Center came to life. Amid the clouds of tear gas, hundreds of volunteer reporters documented what unfolded. That week indymedia.org received 1.5 million visitors — more than CNN — and produced a daily video report and newspaper. It was the first node in a global citizen journalist movement.

We speak with those who know the story best. Jill Friedberg is co-founder of the Seattle Independent Media Center and co-produced the Seattle WTO documentary “This is What Democracy Looks Like.” Rick Rowley is an Oscar-nominated filmmaker and independent journalist with Midnight Films, as well as co-producer of “This is What Democracy Looks Like.” Tish Stringer and Renée Feltz are co-organizers of the 20th Anniversary Indymedia Encuentro taking place this weekend at the Rice Media Center. Stringer is Film Program Manager at Rice University and author of a book on Indymedia: “Move! Guerilla Films, Collaborative Modes and the Tactics of Radical Media Making.” Feltz was at the Seattle WTO protests and helped found the Houston Independent Media Center. She’s a longtime Democracy Now! producer and reporter, including for The Indypendent, a newspaper that grew out of New York City Indymedia.

Cities of the future: Dreaming of a smart urban revolution

Read more about this event: https://www.sei.org/events/nordic-gre… Nordic countries offer proven and scalable solutions for cutting emissions globally. What would the impacts be if more cities joined in? On 27 November SEI will host a dialogue with municipal representatives from Sweden and Finland to learn and share experiences of successful ways in which Nordic municipalities implement green city solutions.

Nordic Green to Scale for Cities and Communities

Read more about this event: https://www.sei.org/events/nordic-gre…
Nordic countries offer proven and scalable solutions for cutting emissions globally. What would the impacts be if more cities joined in? On 27 November SEI will host a dialogue with municipal representatives from Sweden and Finland to learn and share experiences of successful ways in which Nordic municipalities implement green city solutions.

How ‘climate procrastination’ has put the planet in peril

The United Nations has an alarming assessment of climate change and how countries around the world are not doing nearly enough to slow its damage before it becomes worse. The report finds that the warming effect of greenhouse gases on the planet has increased 43 percent just since 1990. Columbia University’s Dr. Radley Horton joins Judy Woodruff to discuss the problem and potential solutions.

One of the biggest questions coming from critics of President Trump is why Republicans and particularly Evangelical Christians seem to go to extremes to talk up his presidency and his accomplishments. Princeton University Professor Eddie Glaude, New York Times op-ed columnist Bret Stephens, and Stand Up Republic Executive Director Evan McMullin join Stephanie Ruhle to discuss these comments from the GOP including Rick Perry calling the president “God’s chosen one”. Aired on 11/26/19.

“I’m sitting here in front of the Conservative Party headquarters… we’re a bit disappointed, very disappointed that nobody has come out to discuss our three demands, we want them to do that, we won’t go away until they do”, 76 year old Professor Peter Cole declared as he sheltered under his umbrella.

With our hunger strike, we are calling for a change in business as usual, for any new Government to make the Climate & Ecological Emergency its highest and most fundamental responsibility . This is our opportunity to make clear to Parliament and Government that we will not stand by this flagrant dereliction of duty to the basic subsistence and survival needs of the people of this country.

Through our hunger strike we demand a “Politics of Humility” from our politicians, to demand our Parliament to show more humility towards its duties to its citizens rather than being entranced by power, influence and ideologies.

Read a copy of the letter delivered to all UK party leaders HERE: https://docs.google.com/document/d/1I…

Forests can cope with a warming world if – and only if – temperature rises increase in line with increases in atmospheric carbon dioxide.

Increased CO2 allows trees to develop physiological characteristics, such as greater foliage, that can cope with higher temperatures.

But researchers warn that a break in the temperature-CO2 increase ratio could trigger mortality in forests.

The findings appear in the Proceedings of the National Academy of Sciences.

“Nobody had really considered incorporating the ability of trees, the forests, to adjust to novel conditions and to acclimate,” explained co-author John Sperry from the University of Utah.

“So it felt like we were bringing in two new approaches to this longstanding question of whether CO2 or warming were going to play out in the future.”

Using a unique model that took into account the trees’ physiology, Prof Sperry and his colleagues reached a rather surprising conclusion.