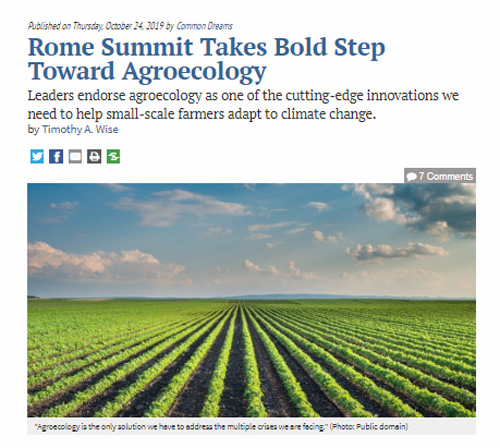 The Climate Action Summit at the UN last month was widely considered a disappointment, failing to garner the kinds of government actions needed to address the climate crisis. Sadly, the same can be said for actions on agriculture and climate change, despite a well-publicized commitment of $790 million to “to enhance resilience of over 300 million small-scale food producers in the face of mounting climate impacts.”

That is not because the investment isn’t needed. It is, desperately. Small-scale farmers in developing countries are already bearing the brunt of climate change yet they have received little of the promised funding to help them adapt to drought, flooding, heat, and other climate changes.

These new initiatives won’t bridge that gap. Just as government actions to date are proving far too weak to address the climate emergency, these agriculture programs support familiar measures that have thus far failed to help small-scale farmers. Some measures have left them even more vulnerable to climate change.

Published on Oct 26, 2019
In an open letter more than 100 famous figures, including actors Benedict Cumberbatch and Jude Law, called for ‘systemic change to the fossil-fuel economy’. While admitting there’s no escaping celebrities’ heavy carbon footprint – that hasn’t stopped the rich and famous from calling for action.

Going Green Is The Only Thing That Can Save The Economy

Published on Oct 26, 2019
According to a new report, the “green economy” has already added millions of jobs and generated over a trillion dollars for the economy, making it one of the fastest-growing sectors in the United States. Going green is the only thing that can save the US economy, as Ring of Fire’s Farron Cousins explains.

Published on Oct 26, 2019
Rudy Giuliani seems to have inadvertently left a voicemail to an NBC News reporter last week. On the tape, he can be heard trashing the Bidens, talking about his overseas dealings, and lamenting the need for cash.

When Humans Were Prey

Not too long ago, our early human ancestors were under constant threat of attack from predators. And it turns out that this difficult chapter in our history may be responsible for the adaptations that allowed us to become so successful.

When We Met Other Human Species

We all belong to the only group of hominins on the planet today. But we weren’t always alone. 100,000 years ago, Eurasia was home to other hominin species, some of which we know our ancestors met, and spent some quality time with.

Should We Colonize Venus Instead of Mars? | Space Time | PBS Digital Studios

Tweet at us! @pbsspacetime Facebook: facebook.com/pbsspacetime Email us! pbsspacetime [at] gmail [dot] com Support us on Patreon! http://www.patreon.com/pbsspacetime Help translate our videos! http://www.youtube.com/timedtext_cs_p… Mars One. The Mars Rover. Bruno Mars. Mars Bars. It’s pretty clear we’re OBSESSED with the idea of Mars, especially in regard to it being a potential colony for earthlings. But is that really the best option? Is there a better place for us to colonize in our solar system? Well, how about Venus? Sure the surface temperature is over 450 degrees Celsius, with crazy pressure, but there might be a smart way around that, making Venus a better option for long term colonization than Mars! How? Watch this week’s episode of SpaceTime and find out!

Kavanaugh’s college roommate: He was lying

James Roche, the college roommate of Supreme Court nominee Brett Kavanaugh, speaks to CNN’s Anderson Cooper about his experience with Kavanaugh at Yale.