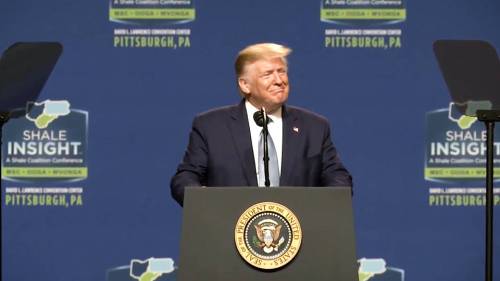 In Pittsburgh, President Trump touted his administration’s support for the natural gas industry on Wednesday, praising the growth of fracking wells in Pennsylvania and defending his plan to pull the U.S. out of the Paris Climate Accord. During his keynote address to the Shale Insight energy conference, Trump also praised his administration’s construction of new barriers on the southern border.

‘How far would you – should you – go in the cause of climate change? Jemma Woodman investigates.’

The PM has said he will give MPs more time to debate his Brexit deal, if they agree to a 12 December election.

Boris Johnson told the BBC he expected the EU to grant an extension to his 31 October deadline, even though he “really” did not want one.

But Jeremy Corbyn said he would not support an election until a no-deal Brexit is “off the table”.

EU leaders could give their verdict on delaying Brexit for up to three months on Friday.

Commons leader Jacob Rees-Mogg told MPs the government would on Monday table a motion calling for a general election.

Under the 2011 Fixed-Term Parliament Act, two-thirds of MPs must vote for a general election before one can be held.

Bayer up after delay of cancer linked RoundUp trial

Three California juries have ruled against Bayer in trials over the adverse health effects of glyphosate, the active ingredient in popular weed-killer RoundUp, and the company faces thousands more cases. But the postponing of a Missouri trial until 2020 has caused Bayer stocks to climb. RT America’s Brigida Santos joins News.Views.Hughes with the details.

Can we hack climate change to save us all? | Foreign Correspondent

They sound like science fiction, but radical remedies to slow global warming are on the way. Eric Campbell goes in search of crazy brave ideas to save the world.

The Race is On: Secrets and Solutions of Climate (2019)

This film shows you the central shocking secrets about the global climate crisis – but also solutions we already have to avoid disaster. Everyone wants a better, brighter future, and through smart storytelling, this film opens up the climate emergency for all to take effective actions. Producers Paul Maple and Dr. James Dyke have brought together world leading experts and change makers from across the UK to explain simply this epic story and inspire hope. From climate facts and basic assumptions, to upgrading our political and economics systems, and enhancing our cities and communities. The Race is On offers understanding, ideas and motivation – be part of it. www.climateracefilm.org

In Manhattan, a personal attorney for Donald Trump told a federal court Wednesday that the president could neither be investigated for a crime nor prosecuted — even for murder. The argument by Trump’s attorney William S. Consovoy came as he sought to quash a subpoena seeking the president’s private financial records about hush money payments made to adult film star Stormy Daniels ahead of the 2016 election. During Wednesday’s hearing, Judge Denny Chin asked Consovoy about Trump’s infamous comment in 2016 that he could shoot someone on Fifth Avenue in Manhattan and not lose any voters.

Judge Denny Chin: “And what’s your view on the Fifth Avenue example? Local authorities couldn’t investigate? They couldn’t do anything about it?”

William S. Consovoy: “I think once a president is removed from office, any local authority – this is not a permanent immunity.”

Judge Denny Chin: “Well, I’m talking about while in office.”

Judge Denny Chin “That’s the hypo[thetical]. Nothing could be done? That is your position?”

William S. Consovoy: “That is correct.”

A lawyer for Manhattan’s District Attorney’s office responded, “There is no such thing as presidential immunity for tax returns” and, “They’re making this up.”

Why adjunct professors are struggling to make ends meet

Juggling multiple part-time jobs, earning little-to-no benefits, depending on public assistance: This is the financial reality for many adjunct professors across the nation. Economics correspondent Paul Solman looks for the origins of this growing employment trend at colleges and universities.

How the upper middle class keeps everyone else out

Watch more from Making Sen$e: https://bit.ly/2D8w9kc Read more economic news: https://to.pbs.org/2qRyskq In the United States, people within the top 1 percent income bracket own one-third of the nation’s wealth. But scholar Richard Reeves, author of “Dream Hoarders,” argues that the top 20 percent has created an even starker divide with behaviors and policies that limit economic mobility for lower-income groups. Reeves joins Hari Sreenivasan.