While Angels Weep… Doing Theology on a Small Planet 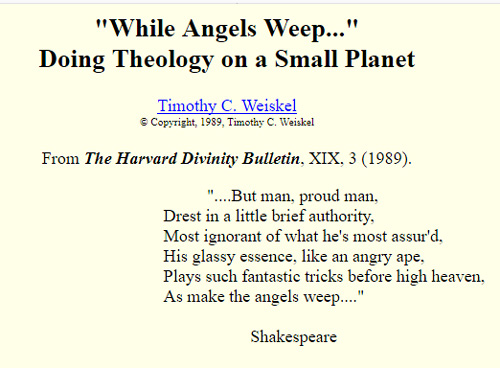 We live on the third planet from the sun, our closest star. As stars go, it is not a very big one. Nor is the planet, for that matter. Even with gadgets of our own making it can be circled in an hour or so. It’s a pretty small place to call home in the vastness of all that we have come to know as creation.

Yet home it is; and an extremely vulnerable one at that. Most of the planet is covered with water, some of which periodically turns to ice in the high latitudes as solar radiation and the planet’s orbital trajectory vary over time. Moreover, the planet is enclosed in an improbable envelope of gases whose precise proportions — essential for our existence — can only be maintained through the continuous metabolism of countless life-forms on or near its surface. Species, populations and communities of these life-forms co-evolve over time in response to the alternate rhythms of ice and warmth and the variation of habitat created by drifting continental plates, changing sea levels, and shifting regional climates.

Humans are a recent arrival in the community of life-forms, prospering during the inter-glacial periods only over the last million years of a three billion year continuum — that is, in roughly the last 0.03% of life’s unfolding drama. Moreover, it now seems probable that we will not endure any longer than many of the other transient life-forms that have left traces of their bones or behavior in the sands and sediments of time. The capacity for intelligence which humans possess may not prove to be an adaptive trait in the long run, especially since human intelligence is frequently deployed to kill fellow humans or extinguish other life-supporting organisms crucial for long term human survival.