How American Kids Are Learning About 9/11 in School | Time 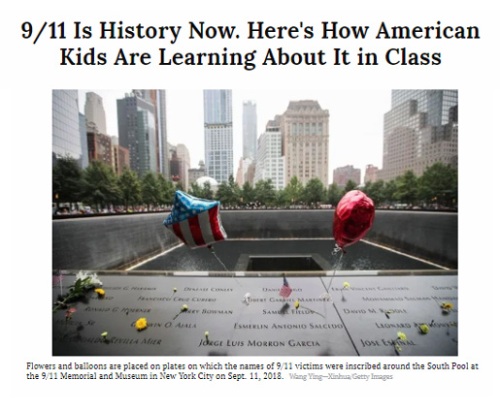 BY OLIVIA B. WAXMAN   SEPTEMBER 10, 2019
On the morning of Sept. 11, 2001, Lauren Hetrick was a 16-year-old sophomore at Hershey High School in Hershey, Pa. Her French class was just about to start when a strange announcement came over the P.A. system: “Attention, teachers: The computer tech is in the building.”

The teacher, hearing those words, logged onto her computer. Then she started to cry. She turned on the TV, and there was the North Tower at the World Trade Center, in flames. The class watched as a second plane hit the South Tower. Then the students watched the collapse of the tallest buildings in New York City.

Nearly two decades later, Hetrick has cause to see her teacher’s behavior that morning through a slightly different lens: She became a high school teacher herself, so helping students understand the events of 9/11 is part of her job too. This generation of students were almost all born after that defining 21st century moment, so while the attack may seem like yesterday to those old enough to remember it, to Hetrick’s students, it’s history.

Many teachers who remember what it was like to have been in school at that time use the memory to help their students connect to the topic. Hetrick, who chairs her school’s Social Studies department in Newville, Pa., shows her students the same Today show episode she watched that day. She also encourages them to listen to the stories of victims’ families and first responders recorded by StoryCorps, in hopes the personal recollections will make students more engaged “by seeing I’m truly invested in what we’re doing, seeing how much I’m caring about this, how emotional I get.”

When she first started teaching U.S. History in 2008, that lesson felt like déjà vu.

“I was teaching sophomores about my experience as a sophomore, and I would go home after that lesson and just break down,” she recalls. “I was having a hard time detaching. [Teachers] want to form a connection, but we also need to stay professional as historians and have that little bit of detachment. It’s definitely not easy to do.”

What Must Be Learned

It’s not surprising that teaching 9/11 as history is a delicate task. In addition to the emotional burden that falls on teachers who remember that day, the subject matter is sensitive and the images and documents that might be used as primary sources are disturbing. The story is also very much still being written, as the effects of 9/11 on American society continue to evolve.

There is also no national guideline that states are required to follow in terms of teaching the topic, so lessons will vary depending on the teacher or school district. In New York, for example, schools will observe a moment of silence on Wednesday, after Gov. Andrew Cuomo signed a law on Monday requiring observation of the anniversary. A 2017 analysis of state high-school social-studies academic standards in the 50 states and the District of Columbia noted that 26 specifically mentioned the 9/11 attacks, nine mentioned terrorism or the war on terror, and 16 didn’t mention 9/11 or terrorism-related examples at all.

That variation is part of the reason why Jeremy Stoddard, a professor at the University of Wisconsin-Madison School of Education, set out to analyze how teachers are talking about 9/11 in classrooms nationwide.

A new study released this month, on which Stoddard is the lead author, polled 1,047 U.S. middle- and high-school teachers and revealed that the most popular method of teaching about 9/11 and the War on Terror was showing a documentary or “similar video.” The next most cited method was discussing related current events. The third most mentioned approach was sharing personal stories, the way Hetrick does; Stoddard says younger teachers in particular tend to aim to get kids “to feel like they felt that day, to understand the shock and horror people felt that day.”

But, in keeping with some larger pedagogical trends in recent years, textbooks are not the go-to resource for learning about 9/11 in 2019.

Part of the reason is that, even if publishers update textbooks, schools may not have the budget to buy the latest edition; Kayla Turner, a high school social studies teacher in Raleigh, N.C., says some of the textbooks used in her classes haven’t been updated since 2001. Like Hetrick, Turner relies on personal experience to connect her students to the material. “I get teary-eyed with my students,” she says, especially when she explains that her father was a corrections officer who got called in to do crowd control at Ground Zero, and her cousin’s husband was a first responder.

So, in Stoddard’s new survey of secondary-school teachers, 71% said they use websites, 33% said they use specific curricula produced by non-profit and educational organizations and 23% said they use textbooks to explain 9/11 — and about 20% of participants said they didn’t have the curriculum or materials they needed to discuss 9/11 and the War on Terror.