The Worldwide Threat Assessment has been presented to Congress annually by the Director of National Intelligence; and before that office was created, it was presented by the CIA Director in his position as the Director of Central Intelligence. This annual threat assessment testimony, published as text, is one of the most informative top-level products of the U.S. Intelligence Community that is publicly available. Since 2014, the Center for Homeland Defense and Security at the Naval Postgraduate School has produced and provided a multi-media enhanced, annotated version of the text document.

Statement for the Record: 2019 Worldwide Threat Assessment of the U.S. Intelligence Community

STATEMENT FOR THE RECORD:
WORLDWIDE THREAT ASSESSMENT of the US INTELLIGENCE COMMUNITY

Chairman Burr, Vice Chairman Warner, Members of the Committee, thank you for the invitation to offer the United States Intelligence Community’s 2019 assessment of threats to US national security. My statement reflects the collective insights of the Intelligence Community’s extraordinary women and men, whom I am privileged and honored to lead. We in the Intelligence Community are committed every day to providing the nuanced, independent, and unvarnished intelligence that policymakers, warfighters, and domestic law enforcement personnel need to protect American lives and America’s interests anywhere in the world.

The order of the topics presented in this statement does not necessarily indicate the relative importance or magnitude of the threat in the view of the Intelligence Community.

Information available as of 17 January 2019 was used in the preparation of this assessment. 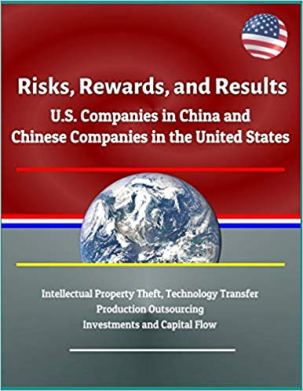 This important report compilation contains the testimony of six renowned experts at a hearing in February 2019.

Both panels assessed implications of this participation for U.S. businesses, workers, consumers, and investors.

This compilation includes a reproduction of the 2019 Worldwide Threat Assessment of the U.S. Intelligence Community.

Panel I: Chinese Companies in the United States: Reshaping the U.S. Competitive Landscape?

Panel II: U.S. Companies in China: How Much Pain, How Much Gain? *

Over the years that this commission has been in existence, the ability to really find out what is happening to our companies operating in China in a specific and granular basis has been difficult, if not impossible, to ascertain. The issue of what is happening to and what the activities of U.S. companies operating in China are is of paramount interest, especially as negotiations between our two countries on trade issues appear to be near an end. Focus has been on intellectual property theft and the coercive activities of the Chinese government and its companies to force technology transfer as a condition of doing business there. But there is also attention to gaining greater access for U.S. investments into the Chinese market. That has been identified as a priority. But a deeper examination of the desirability of focusing on that is, in my view, merited.

Is greater investment by our companies in China in our companies’ interests and is it in the interests of our domestic producers and employees? Is it in the interests of our nation, as China has sought to advance its own interests by any means possible, legal and illegal? Do we really want our companies to move more of their operations to China? With 46 percent of China’s exports emanating from foreign-invested enterprises, U.S. and otherwise, and 60 percent of the exports targeted at the U.S. market emanating from those enterprises, will more of our investments there simply fuel more outsourcing of production and offshoring of jobs and more imports here?Today China is the world’s second largest economy, the world’s leading exporter, yet perceptions of risk and reward for the global private sector remain largely unchanged. The Australian Chamber of Commerce reported last year that more than two-thirds of their companies find it difficult to do business in China, yet remain committed because of the rise of the middle class.

When China joined the WTO, it was the sixth largest economy in terms of nominal GDP. American companies were attracted to the large and rapidly growing market in spite of concerns about restrictions on investment opportunities, a lack of regulatory transparency and inconsistent enforcement of rules and law. Today China is the world’s second largest economy and the world’s leading exporter yet perceptions of both risk and reward for the global private sector remain largely unchanged.

Huawei: Why governments are afraid of the Chinese giant

Why Chinese Tech Giant Huawei Scares Countries Like the U.S.

Feb.21 — Huawei has been rocked by political and legal turmoil at a time when it also happens to be poised to build the worldwide 5G revolution. Is the timing a coincidence, or a coordinated attempt to knock China’s biggest company down a peg? This is the story of how Huawei went from a small-time parts reseller to the homegrown tech giant China always hoped for, and the west always feared.

Intellectual property theft is at the core of the Chinese system: Gordon Chang