The Gospel According to Agribusiness – Real Food Media – Medium 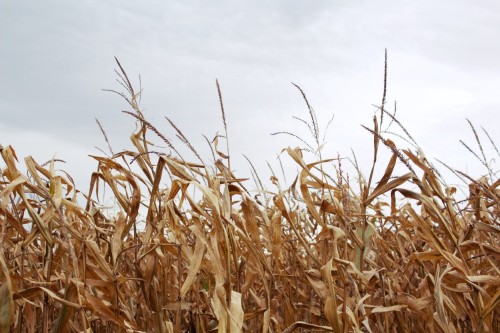 This piece is an abridged excerpt from my book,

In the beginning — 1926 — Agribusiness created corn, or so it proclaimed. It hadn’t, of course: 7,000 years earlier, the Mesoamerican gods had beaten them to it. What Agribusiness actually created thousands of years later was hybrid corn, and it declared that hybrid corn was the only corn that mattered. And Agribusiness saw that it produced a lot and, most important, farmers had to buy it every year. And it was good, for Agribusiness.
On the second day, Agribusiness separated the land from the water, expanding drainage tiles under millions of acres of farm-belt swampland. And the land was good, especially for long straight rows of hybrid corn.

On the fourth day, Agribusiness created animal prisons, which it called hog farms even though they were factories. It moved the animals into the factories. The new feed companies could buy all the cheap corn and soybeans, and the factories could buy the feed, creating two commercial transactions where before there had been none. And they would spread far and wide, and so would the millions of gallons of their concentrated manure. And Agribusiness held its nose at the putrid odor and said it was good, proclaiming its own genius for creating such a costly commercial nutrient cycle from the natural one it had destroyed by moving animals off the farms.

On the fifth day, Agribusiness created an army of lobbyists, and it would be called the “farm lobby” even though it lobbied for corporations. This army persuaded the US Congress to outlaw government measures to ensure fair prices for farmers, decent prices for consumers, and controls on production so supply would not exceed demand and agricultural land would not be farmed to exhaustion. And it was good, for Agribusiness: the high production was good for seed, chemical, and other input-suppliers; the low prices were good for animal factories and other processors.
On the sixth day, laden with way too much corn fetching rock-bottom prices, Agribusiness created ethanol to power our cars. And it commanded that the fuel be made from corn, even though corn was the least efficient crop to make it from. And it was good, for Agribusiness.

On the seventh day, with corn prices at record highs and wreaking havoc with poor people overseas, and with every inch of even marginally farmable Iowa land brought into production, Agribusiness rested. Agribusiness surveyed its good works and ordained that a temple should be anointed to honor its wisdom and good fortune. And so the World Food Prize Hall of Laureates was transformed into that temple, with offerings from the faithful. Forevermore, they would gather, on World Food Day even though they no longer produced food, for an annual ritual of worship and adoration.
Now, so deep into such a profound devolution, it was difficult to say which part of that genesis story was the real problem. For many Iowans, the immediate problem was their polluted drinking water. To defend themselves from the toxic effluents of Agribusiness’s creations, they created the world’s largest de-nitrification plant to protect Des Moines’ drinking water from the nitrates, E. coli, and potassium-laden sediment that flowed downstream. These flowed all the way down the Mississippi to a “dead zone” the size of New Jersey in which all the sea life created on the Hebrew God’s fifth day had been asphyxiated.
This excerpt was originally published on Real Food Media.