Wildfires are ravaging the Arctic, with areas of northern Siberia, northern Scandinavia, Alaska and Greenland engulfed in flames.

Lightning frequently triggers fires in the region but this year they have been worsened by summer temperatures that are higher than average because of climate change.

Plumes of smoke from the fires can be seen from space.

Mark Parrington, a wildfires expert at the Copernicus Atmosphere Monitoring Service (Cams), described them as “unprecedented”.

How bad is it?

Published on Jul 13, 2019
Starting Monday 15 July, we rise up in an organic, decentralised and coordinated action with one main message: ACT NOW! Throughout the week, rebels will disrupt central spaces in five cities with the support of local groups from across the UK:

Published on Jul 26, 2019
San Francisco: Tuesday (July 23) at noon we took action in coordination with XRDC https://www.facebook.com/ExtinctionRe… to “encourage” Senator Feinstein and the US Congress to TELL THE TRUTH AND ACT LIKE THIS CLIMATE CRISIS IS REAL! DC livestreamed vid here https://www.youtube.com/watch?v=737X0…

We knew this was going to happen. Once again, Congress has dropped the ball on the climate crisis.

On July 9th, while XRDC were rallying outside the Capitol, Congress decided to send Bernie and AOC’s climate emergency resolution to committee. Several dozen cosponsors signed on. And then…nothing happened.

It’s clear that Congress is not taking this resolution seriously.

How to save humankind (according to James Lovelock) | The Economist

James Lovelock, the renowned scientist, is 100 years old. He believes the human race is under threat of destruction—but he has a radical plan for saving it

Is the human race under threat of destruction? This man thinks so and he has a plan for saving it. He’s a renowned scientist, inventor and most famously he is the man who came up with a revolutionary new idea of how the Earth works. He is James Lovelock and he has just turned 100 years old.

He believes artificial intelligence or so called “cyborgs” could take control, cool the planet and allow the human species to survive. James Lovelock’s work has changed the way scientists look at everything – from the common cold, to life on Mars. He invented a device that detected ozone-damaging CFCs in the atmosphere all around the world a precursor to the detection of holes in the ozone layer. His revolutionary insights about the Earth behaving like a living being – a single, complex, self-regulating system reframed the way environmentalists understand the Earth. He named the idea after the ancient greek goddess of Earth—Gaia.

But James Lovelock’s Gaia is no kindly goddess protecting humankind from itself. He argues that humans have pushed Gaia to its limit and whilst the Earth will eventually rebalance it may be too late for the human race. Unless, that is, humans start making drastic changes.

This is his four-point plan to save humankind. By 2050, 140m people could be forced to migrate within their countries because of climate change. But why wait? James Lovelock believes land that will be made uninhabitable should be abandoned now. Humans should retreat to efficient, safe, climate-controlled cities. According to James Lovelock humans need to rethink the way they power the world, ditching fossil fuels and switching not just to renewable but to nuclear power.

Fears around nuclear energy have been compounded by disasters like Chernobyl and Fukushima. But for James Lovelock these fears remain misplaced.

Global warming may be the biggest threat facing humanity. Attempts to cut carbon emissions are too small to reduce CO levels. James Lovelock thinks climate-controlling technology called geoengineering could be the answer.

In 1991 a volcanic eruption in the Philippines had a profound effect on the world. The gas cloud it produced reached the stratosphere cooling the world by as much as 0.5°C for four years. James Lovelock’s boldest prescription emerges from his belief that the Earth is on the verge of a new era. One where the dominant form of life is artificial.

He believes artificial intelligence or cyborgs will move beyond human control generating intelligences far greater than our own. They will be far more capable of tackling climate change than humans

Homo sapiens has been the dominant species on Earth for tens of thousands of years. If the human race is to survive, James Lovelock believes the key is for it to surrender its position of privilege and give way to more intelligent life. But of course there are things that even AI would struggle to control.

In Mozambique, the World Food Program is warning some 1.6 million people are facing food insecurity, months after two cyclones left hundreds dead in one of the worst weather-related disasters ever to hit the Southern Hemisphere.

Meanwhile, much of Europe is being hit by a massive heat wave, sending temperatures into record-setting and life-threatening terrain for parts of the continent. Temperatures were forecast to reach 104 degrees Fahrenheit in many German cities, with highs in Paris expected to top 107 degrees. It’s the second major heat wave this year in Europe, where many countries recorded their highest-ever temperatures just one month ago.

This comes as new research published in the journal Science finds the climate is changing faster—and over a wider area of the Earth—than at any other time in the last 2,000 years. The current rate of change far outpaces climate variations seen centuries ago during events like the Medieval Warm Period and the Little Ice Age.

The worst disaster in the Mediterranean this year

Chinese military leaders signaled Wednesday they are prepared to intervene against pro-democracy protesters in Hong Kong. This is Wu Qian, spokesperson for China’s Ministry of National Defense.

Wu Qian: “The behavior of some extreme protesters have challenged the authorities of the central government, tested the limits of the ‘one country, two systems’ principles, which are absolutely intolerable. We will not allow the pearl of the East to be stained.”

The threat came just days after Hong Kong police fired tear gas and rubber bullets at protesters who once again took to the streets calling for pro-democracy reforms and for an investigation into police abuses during earlier protests. 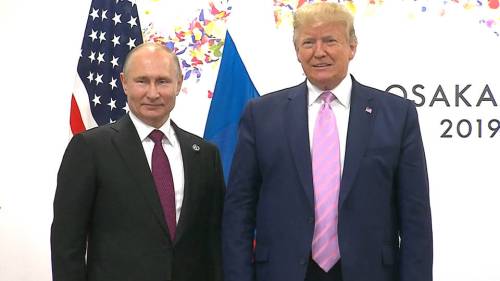 The Senate Intelligence Committee concluded Thursday that Russian hackers targeted election systems in all 50 U.S. states during the 2016 election—a much wider operation than previously reported. The committee’s heavily redacted report found no evidence that any votes were changed as a result of the hacking efforts, but it found hackers were in a position to delete or change voter data in the state of Illinois. The report came just one day after former special counsel Robert Mueller told lawmakers on Capitol Hill that the Russian government interfered in the 2016 election in a sweeping and systematic fashion. Despite Mueller’s latest warning, Senate Republicans blocked a pair of election security bills this week.

Minnesota Congressmember Ilhan Omar on Thursday introduced a bill that would end the use of toxic landfills while transitioning the U.S. to a zero-waste economy as part of the Green New Deal. Congressmember Omar says the Zero Waste Act would create a federal grant program to help local cities invest in zero-waste initiatives.

Rep. Ilhan Omar: “Our country generates over 250 million tons of trash each year. Right now most of that trash does not get recycled or composted or reused. Instead it ends up in landfills, in incinerators, fueling our climate crisis and polluting the communities who live near these toxic sites. The only way to combat this crisis is to move to a zero-waste economy.”

The Zero Waste Act is co-sponsored by Democratic Congressmembers Deb Haaland of New Mexico and Earl Blumenauer of Oregon.

California state officials have signed a deal with four major automakers to reduce greenhouse emissions from cars and trucks, defying a White House bid to roll back Obama-era fuel efficiency standards. The deal between California and Ford, Honda, Volkswagen and BMW would see passenger vehicles average about 50 miles per gallon by 2026. The Trump administration has proposed freezing auto efficiency at 2020 levels, or around 37 miles a gallon. Auto emissions are California’s single largest source of greenhouse gases, and improving fuel efficiency is critical to meeting the state’s goals on combating climate change.