Greta Thunberg: ‘They see us as a threat because we’re having an impact’ | Culture | The Guardian 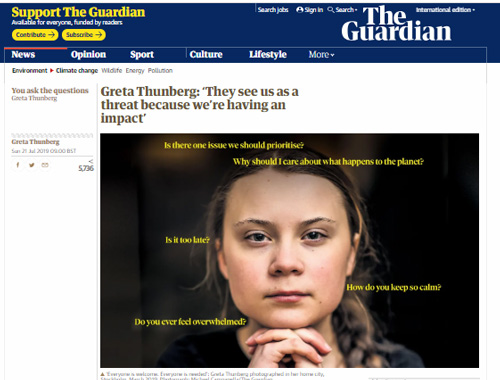 The climate activist answers questions from famous supporters and Observer readers, with an introduction by Ali Smith

Greta Thunberg. This time last year she was unimaginable. Then, pretty much from nowhere, there she was: small and slight, a girl just turned 16, the way-too-young odd person out on a panel of adults sitting in front of the world’s economic powers at Davos last January. Unshowy and serious, careful, firm, she said it. Our house is on fire.

The ancient Greeks had a word for this: parrhesiastes. It means a person who speaks truth to power: you should not be behaving in this way. Don’t. More specifically it suggests someone in whom directness of expression and access to truth coincide; and it means someone of very little power who’s risking everything – because they can’t not, there’s no option – to speak ethical truth to powers so entrenched that they’re close to tyrannical, because telling this truth is about moral law. “Some people, some companies, some decision-makers in particular know exactly what priceless values they have been sacrificing to continue to make unimaginable amounts of money, and I think many of you here today,” she said to the World Economic Forum conference, “belong to that group of people.”

Thunberg is Swedish; she was born in 2003 and lives in Stockholm with her younger sister Beata, her mother, a singer, and her father, an actor. There’s a picture of the family somewhere online taken when she was much younger; her mother and father are smiling broad old-fashioned smiles at the camera – doing what you do when you have your photo taken. Both the children, only waist- and knee-high, regard the lens with utter seriousness and inquiry. At eight years old, Greta Thunberg heard about climate change. She wondered why no one was doing anything to stop it. At 11 she stopped speaking, in protest; now she sees that “selective mutism” as the first step to understanding the power and necessity of speaking at all.