How NASA is preparing to launch another mission to the moon

Climate One: The Red State Paradox and Saudi America

The Problem is Capitalism – George Monbiot 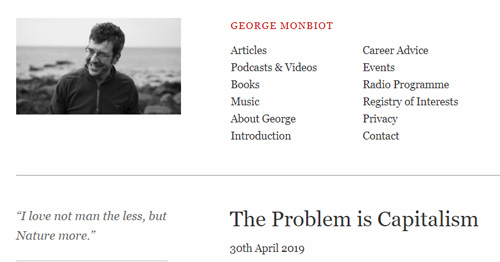 It is a weapon pointed at the living world. We urgently need to develop a new system.

By George Monbiot, published in the Guardian 25th April 2019

For most of my adult life, I’ve railed against “corporate capitalism”, “consumer capitalism” and “crony capitalism”. It took me a long time to see that the problem is not the adjective, but the noun.

While some people have rejected capitalism gladly and swiftly, I’ve done so slowly and reluctantly. Part of the reason was that I could see no clear alternative: unlike some anti-capitalists, I have never been an enthusiast for state communism. I was also inhibited by its religious status. To say “capitalism is failing” in the 21st century is like saying “God is dead” in the 19th. It is secular blasphemy. It requires a degree of self-confidence I did not possess.

But as I’ve grown older, I’ve come to recognise two things. First, that it is the system, rather than any variant of the system, which drives us inexorably towards disaster. Second, that you do not have to produce a definitive alternative to say that capitalism is failing. The statement stands in its own right. But it also demands another, and different, effort to develop a new system.

Capitalism’s failures arise from two of its defining elements. The first is perpetual growth. Economic growth is the aggregate effect of the quest to accumulate capital and extract profit. Capitalism collapses without growth, yet perpetual growth on a finite planet leads inexorably to environmental calamity.

A system based on perpetual growth cannot function without peripheries and externalities. There must always be an extraction zone, from which materials are taken without full payment, and a disposal zone, where costs are dumped in the form of waste and pollution. As the scale of economic activity increases, until capitalism affects everything from the atmosphere to the deep ocean floor, the entire planet becomes a sacrifice zone: we all inhabit the periphery of the profit-making machine.

This drives us towards cataclysm on such a scale that most people have no means of imagining it. The threatened collapse of our life support systems is bigger by far than war, famine, pestilence or economic crisis, though it is likely to incorporate all four. Societies can recover from these apocalyptic events, but not from the loss of soil, an abundant biosphere and a habitable climate.

The second defining element is the bizarre assumption that a person is entitled to as great a share of the world’s natural wealth as their money can buy. This seizure of common goods causes three further dislocations. First, the scramble for exclusive control of non-reproducible assets, which implies either violence or legislative truncations of other people’s rights. Second, the immiseration of other people by an economy based on looting across both space and time. Third, the translation of economic power into political power, as control over essential resources leads to control over the social relations that surround them.

In the New York Times on Sunday, the Nobel economist Joseph Stiglitz sought to distinguish between good capitalism, that he called “wealth creation”, and bad capitalism, that he called “wealth grabbing” (extracting rent). I understand his distinction, but from the environmental point of view, wealth creation is wealth grabbing. Economic growth, intrinsically linked to the increasing use of material resources, means seizing natural wealth from both living systems and future generations.

To point to such problems is to invite a barrage of accusations, many of which are based on this premise: capitalism has rescued hundreds of millions of people from poverty – now you want to impoverish them again. It is true that capitalism, and the economic growth it drives, has radically improved the prosperity of vast numbers of people, while simultaneously destroying the prosperity of many others: those whose land, labour and resources were seized to fuel growth elsewhere. Much of the wealth of the rich nations was – and is – built on slavery and colonial expropriation.

The great southern ocean, reaching down to Antarctica, has absorbed up to 10% of our greenhouse gas emissions. Without that we would be much hotter already. But that ocean sink appears to be weakening. Scientists are exploring why carbon dioxide jumped 40 ppm in a few decades not so long ago, and whether that increase in warming gases could happen again.

Dr. Laurie Menviel, a researcher at the University of New South Wales in Australia, is a leading scientist with many papers.She won the 2019 Dorothy Hill Medal for her work as a ground-breaking young scientist.

In Earth’s latest glacial times, the planet’s climate went rogue, departing from the previously predictable cycles caused by our orbit and tilt. A predictable pattern of ice ages and warmer times was broken. Earth entered much longer colder ice ages, just at the time Homo sapiens emerged on this planet. The planet itself has an internal climate sensitivity that is not dependent on our position relative to the sun. We need to know how that works, because humans may be triggering that kind of process, this time toward warming.

WESTERLY WINDS BLOW UP MORE CARBON?
Around 16,000 years ago, a CO2 rise happened over mere decades, probably due to more intense westerly winds in the southern hemisphere. We’re seeing a big change in southern hemisphere winds now, as the strongest winds retreat from Australia and gather closer to the South Pole.

The prime concept is the “Westerlies” in the Southern Hemisphere. Menviel: “Our study highlights the crucial role of SH [Southern
Hemisphere] westerlies in driving abrupt atmospheric CO2 rise and associated global climate changes. Given the projected poleward intensification of SH westerlies over the 21st Century, and the fact that the Southern Ocean has absorbed ~10% of anthropogenic CO2 emissions, our results suggest a future reduction in CO2 sequestration in the Southern Ocean, with significant impacts on future atmospheric CO2 and climate change.

“It is crucial to document and understand the processes that led to this ice age intensification because, in the absence of changes in orbital forcing, this transition indicates an internal change in the sensitivity of the climate system.”

A NEW RECORD OF THE SOUTHERN HEMISPHERE GOING BACK 1.5 MILLION YEARS
We discuss: “Adam Hasenfratz and colleagues present a new 1.5 million-year record of temperature and salinity in the Southern Ocean. Using trace elements and oxygen isotopes locked inside the microscopic shells of foraminifera, a species of single-celled planktonic animals, Hasenfratz et al. evaluated changes in Southern Ocean circulation across the MPT.”

Most climate science comes from the Northern Hemisphere. We know a lot more about the North Atlantic than the South Atlantic. I wonder if a bias has developed that favors the Arctic as a driver of big changes, omitting important developments in Australia and the Antarctic. But now we have a detailed map of 1.5 million years in the Southern Ocean. That paper is “The residence time of Southern Ocean surface waters and the 100,000-year ice age cycle“, published March 8, 2019.

Dr Menviel studied abrupt changes that happened in the past, and not that long before humans developed agriculture and civilization. Could a poorly understood natural cycle release even more carbon dioxide on top of our enormous continuing emissions? My feeling after reading her papers: humans are playing amid giant forces that we don’t understand very well,—forces that could change our climate fairly quickly into brand new territory. Menviel writes:

“Such amplification may also occur as a result of anthropogenic emissions. The atmospheric CO2 concentration is now at its highest point since at least 800,000 years ago. The ocean has strongly mitigated this atmospheric CO2 increase, particularly in the Southern Ocean, which has absorbed ~10% of the emissions.

The observed poleward intensification of Southern Hemispheric westerly winds and increased Southern Ocean stratification, which are projected to be amplified with further greenhouse gas emissions, could weaken the Southern Ocean carbon sink and induce a nonlinear response of the oceanic circulation and continental icesheets over the coming centuries.”

In new science, just published in Nature, a team of researchers announce that Greenland’s greatest source of sea level rise, the Jakoshavn Glacier has reversed from record ice loss to a gain of ice over the past two years. Apparently this shows again the very big role of ocean temperatures modulating ice loss—another Laurie Menviel specialty.