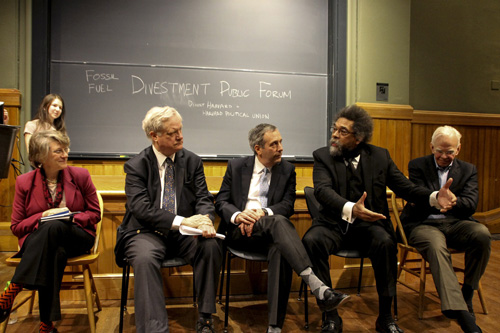 By Alexandra A. Chaidez, Crimson Staff Writer 8 hours ago

In a surprise appearance, University President Lawrence S. Bacow participated in an hour-long forum about fossil fuel divestment Thursday, an event he previously said he would not attend.

On April 4, Bacow declined Divest Harvard’s invitation to attend the student-led forum through an email from his chief of staff. Just two days earlier, Bacow agreed to attend a private discussion with faculty members concerned about Harvard’s continued investment in companies tied to the fossil fuel industry.

The same day Bacow declined to attend the student-led forum, roughly 30 protestors from the Divest Harvard and the Harvard Prison Divestment Campaign interrupted a John F. Kennedy Jr. Forum event where he was speaking, forcing the talk to move to a classroom.

At the end of the event, Bacow said he was not encouraged to meet with the protestors again, but he ultimately made an appearance Thursday.

A portion of the forum was dedicated to discussion among the faculty members and Bacow about the possibility of divesting from fossil fuels.

Engell, who said he supports divesting Harvard’s holdings in the fossil fuel industry, noted that the issue of fossil fuel investments has a “stop watch.”

“This is not merely a matter of social change,” Engell said. “This is a matter of planetary fate in the long term.”

Bacow spoke about his past work in environmental economics and policy, and advocated for other means beyond divestment for resolving climate change and fossil fuel reliance. 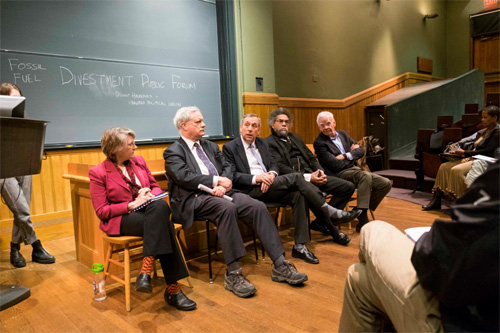