Maps, Stones & Plants: Agents of Empire and the Ecology of the Atlantic Trade 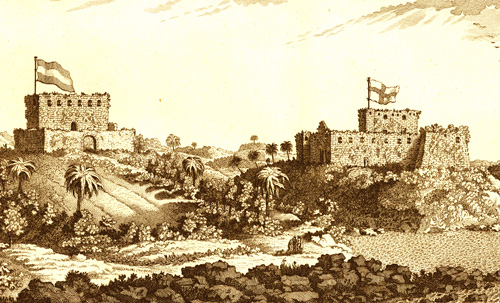 “The first step to understanding man is to consider him as a biological entity which has existed on this globe, affecting, and in turn affected by his fellow organisms, for many thousands of years.”

As archaeologists across the world can affirm, human groups leave enduring traces of their labor and behavior in the sands and sediments of time.  Some of these traces are monumental in scale. Like the Great Wall of China or the Pyramids they are “written in stone.”  In fact, many of these structures are now visible from satellites in space.  By contrast, other traces are smaller than the human eye can see and can only be viewed through a microscopic examination of plant pollen and biological residues in topsoil and sediments.

The “Maps, Stones & Plants” display explores historical maps, drawings of plants, images of garden plots and people from the 18th century in conjunction with present-day satellite photography from space.  It invites participants to reflect upon some fundamental features of European maritime empires.

Questions that occur include:

As different cultures struggled to cope with the abrupt changes in the plant, animal and disease communities in which they found themselves immersed, what was the enduring impact of humans in the history of the trans-Atlantic world?  On one level, of course, all humans behave as a conscious species executing explicit plans with deliberate intentions.

But understanding these plans, intentions and conscious acts is not sufficient to account for human history.  The reason for this is that on another level humans as biological organisms also act as an unconscious vector-species in complex ecosystems, often completely unaware of the enduring impact of their immediate or long-term cumulative behavior.  This, too, can now be examined through the detailed ethno-botany and archaeology of the slave trade.

For an overview of the displayed items and how the exhibit functions, see:  “An Overview of the ‘Maps, Stones & Plants’ Exhibit.”  [Produced by the “History Design Studio” – Harvard Hutchin’s Center]

Beyond African history alone, on a global scale, the “Maps, Stones & Plants” exhibit invites viewers to ponder some fundamental human questions from a new vantage point:

What is the human footprint on Earth over time?  That is, what is the role of human agency in Earth’s ever evolving ecosystems which we did not create, do not understand, cannot control, and must not continue to destroy?

[You may visit and view the 2019 HDS group exhibit at the Rudenstine Gallery in the Hutchins Center for African & African American Research, Harvard Square, Cambridge, MA 02138.]

For “Virtual Reality” (VR) “walk-around” views linked to specific slave-trade castles in exhibit and in the African Historical Graphics Archive:

Individual objects prepared for this display within the group exhibit Footprints Across Time include:

Other prints prepared for the exhibit but not displayed include:

For a discussion of the techniques and digital technologies used in this approach to historical research see:

“Was it the kings who hauled the craggy blocks of stone?” (Berthold Brecht)

This fort now exists as one of many built by the British and many other European trading powers along the Ghana coastline: 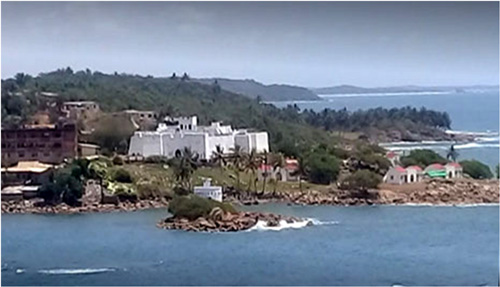 Because of developments in digital technology, large, monumental structures like these can now be viewed from space.

Further, because of the work of scholars and citizens around the world these structures can be “explored” virtually through a “street view:”

…from the ground level, from the outside…

The information captured through this kind of “virtual archaeology” can be quite detailed and revealing, posing a new series of questions to the viewer:

A sequence of historical maps of key islands off the coast of Africa are equally revealing.  See for example:

and compare this map with:

These maps can be linked to current material to provide greater depth to the understanding of the Atlantic trade.

Inspect the architectural details of the Fort on James Island in the Gambia: 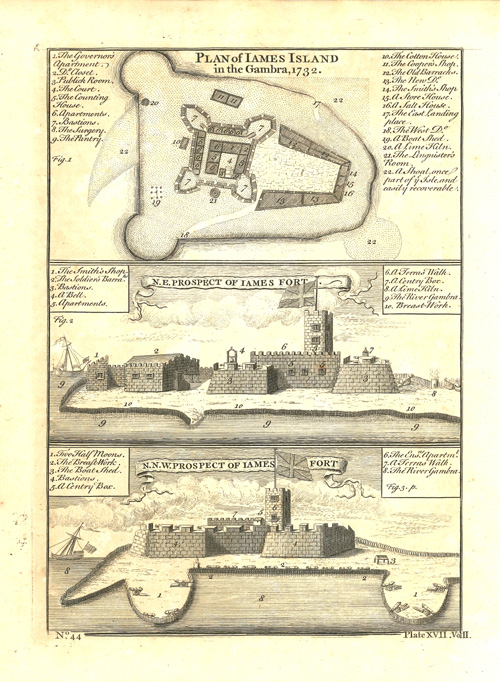 [Reproduced from original print in the African Historical Graphics Archive]

See what remains of this historic Fort on what has now become known as Kunta Kinteh Island: 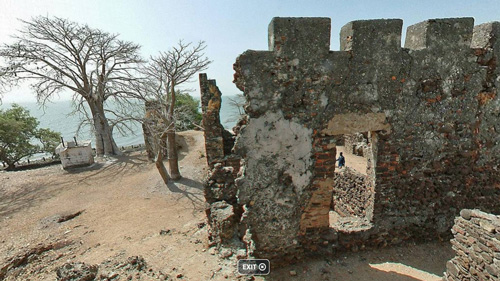 This digital memorial raises questions about the largest slave trades in history and offers access to the documentation available to answer them. European colonizers turned to Africa for enslaved laborers to build the cities and extract the resources of the Americas. They forced millions of mostly unnamed Africans across the Atlantic to the Americas, and from one part of the Americas to another. Analyze these slave trades and view interactive maps, timelines, and animations to see the dispersal in action.